Its leaders citing a lack of financial support, a campaign to end international VFX subsidies to U.S. studios has ended. 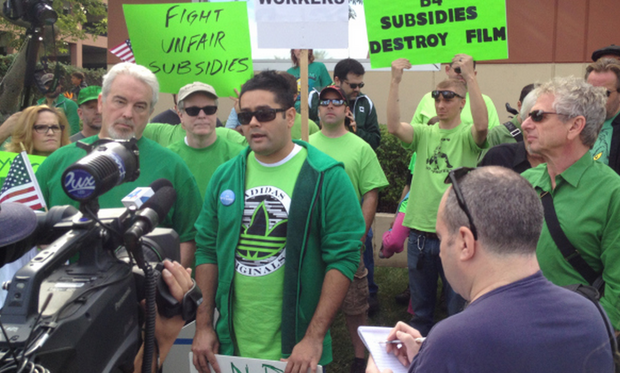 ADAPT founder Daniel Lay speaks at a rally outside DreamWorks Animation in November 2013.

A campaign to end international VFX subsidies to U.S. studios has ended, with its leaders citing a lack of financial support.

According to The VFX Soldier blog written by activist Daniel Lay, the Association of Digital Artists, Professionals and Technicians -- formed a little more than a year ago to address the business interests of the visual effects community -- has been dissolved. “Some members of our community donated money to help fund the effort, but most did not,” Lay wrote.

“We suspected the reason for this was due to how rapidly the industry in California collapsed as work moved to Canada. This left many out of work without money and others being forced to move to Canada. Others were able to take advantage of the recovering economy and move into other industries, which made them reluctant to help an industry they probably would no longer work in,” he added.

ADAPT had retained law firm Picard Kentz & Rowe to challenge subsidies in the U.S. Court of International Trade and ask that a mandatory duty be levied against producers who utilize subsidies. The mandatory levy was aimed at ending the subsidy race that the association argued created an “uneven playing field,” forcing VFX artists to frequently move around the world in order to stay employed.

Despite the initial success of an Indiegogo campaign to finance a feasibility study undertaken by the law firm, which specializes in such trade efforts, the group was able to raise only two percent of the total legal costs.

“Scott and I are extremely disappointed in this decision,” Lay wrote. “It brings to end years of works in hopes of trying to give the VFX industry a fighting chance. While we are upset that many chose not to help fund the effort, we want to thank those that did, and apologize that we couldn’t make it to the finish line and make history.”

The complete text of the announcement, which appears on the VFX Soldier web site, can be read below:

For the past year, Scott Ross and I (Daniel Lay), as well as others that cannot be named, have been lobbying the Visual Effects industry along with others to support the formation of ADAPT, a trade organization as well as a legal case that would penalize the studios that take advantage of subsidies and as a result, harm the domestic VFX industry and its workers. We organized demonstrations, participated in industry panels and national media interviews, and met with industry colleagues in Los Angeles, San Francisco, New York, and Vancouver.

Additionally, we enlisted the services of Picard Kentz & Rowe, a Washington DC-based law firm that specializes in cases such as this, to help us build a case for the anti-subsidy duty effort (CVD). They met with various facility owners and worked with economists to help measure the impact of trade distorting subsidies. They also conducted meetings with key personnel in the International Trade Commission, US Customs & Border Protection, and the US Department of Commerce. These meetings helped lay the framework for the case as well as gauge what challenges might lie ahead.

It is important to point out that these government agencies completely understood the threat that subsidies were to the VFX industry and they were receptive to a trade case being made.

In fact, they were amused to see the Motion Picture Association of America (MPAA) argue (to these very same agencies) that digital transmissions were no different than tangible goods, and that the MPAA was seeking to create rules for US customs to stop digital piracy at the border.

We were also tasked with creating the legal paperwork for making ADAPT a non-profit trade organization. This would allow us to establish a bank account so we could accept donations to pay the law firm for the work that would be ahead of us.

We worked hard to lobby the State of California as well as various politicians, to help pay for our legal effort, but fell short, as we were only able to get vocal support from the California legislature in the recently passed film subsidy law AB1839. After all, we, as opposed to the MPAA and the Studios had no lobbying funds nor a trade association to help persuade lawmakers to take up our cause. Without government support, there was now additional pressure to raise funding from our industry.

Some members of our community donated money to help fund the effort, but most did not.

We suspected the reason for this was due to how rapidly the industry in California collapsed as work moved to Canada. This left many out of work without money and others being forced to move to Canada. Others were able to take advantage of the recovering economy and move into other industries which made them reluctant to help an industry they probably would no longer work in.

On the other hand, the reluctance to support ADAPT might also have been our inability to rally the troops or fully explain what we were doing and how much it was going to cost. And finally, and hopefully incorrectly so, it might be that the VFX community is more bark than bite and that the VFX industry is unwilling to take a stand and be proactive in righting the wrongs of the industry.

Whatever the case may be, after months of campaigning, we were only able to raise a minuscule amount, which would only cover 2% of the total legal costs.

The only donor money spent was to pay the monthly website fees.

It’s important to point out, that none of the travel costs associated with our lobbying efforts were paid by any of the funds donated. In fact, Scott and I have received no funds, remuneration or any expensed items whatsoever from donations. All monies spent beyond the website fees were borne solely by Scott and me.

As the fundraising continued, Scott and I started to become concerned that ADAPT would not be able to pay the law firm for their work. Some were reluctant to donate unless we divulged how much the case would cost or report case details back to them. While we understood their concerns, we were concerned that the Studios would take advantage of any information we would report about the case. Case in point, two major US Studios were already in talks with law firms to prepare to refute our case. The Mayor’s office also wanted to meet with us to find out what was going on, though his representatives were former MPAA employees.

We also considered slashing membership dues to increase donations, but given that the amount raised would only cover 2% of the legal costs, it was hard to believe that lowering dues would get ADAPT to where it needed to be. We decided to continue to lobby for more support from the industry with more meetings and interviews to see if support would grow. Despite that effort, there has been very little growth in support.

After careful consideration Scott and I have decided to dissolve the organization due to insufficient fiscal support.

The question now is what should be done with the funds we have already received?

Scott worked very hard with the law firm to considerably lower their fees. The law firm was extremely interested in the case and slashed their costs considerably. They did a lot of work without any payments from ADAPT and even dipped into their own pockets for the work they did with outside consultants. The total amount of money raised does not cover the amount owed for the work Picard Kentz & Rowe has already done. It barely covers the law firms out of pocket costs. Picard waived their customary fees because they felt that this would be a landmark case that would significantly impact case law on digital goods.

While we could give the law firm all the funds raised, Scott, the law firm, and I were concerned that it would be unfair not to return a portion of the money to donors.

Last week the law firm came to an agreement with us for payment that would allow us to return about 40% of the donations back to donors. Over the next couple of months I will be writing checks and personally mailing back partial donations to donors. I will also immediately suspend any recurring payments of any members of ADAPT.

Scott and I are extremely disappointed in this decision. It brings to end years of work in the hopes of trying to give the VFX industry a fighting chance. While we are upset that many chose not to help fund the effort, we want to thank those that did, and apologize that we couldn’t take it to the finish line and make history. We also want to thank Picard Kentz & Rowe which put so much risk, capital and effort to try to resolve the VFX subsidy issue.