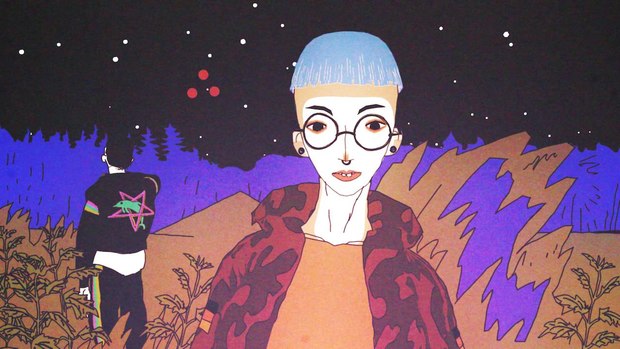 The 29th World Festival of Animated Film – Animafest Zagreb 2019 closed Saturday at Tuškanac cinema. After over 400 screened films and many side events in six festival days, the most festive moment came – the best authors and films were announced.

In the Grand Competition, Short Film jury members Boris Labbé, Ruth Lingford, Michaela Müller, Tünde Vollenbroek and Chen Xi awarded the Grand Prix to the Polish film Acid Rain by Tomek Popakul, produced by Animoon production company. Noted the jury: “The award was given for a film that takes us through some extreme adventures in a way that is sometimes uncomfortable, but always compelling. The filmmaker creates a complex and convincing central protagonist and allows us to identify with her risky quest for intensity and experience.”

The same jury presented the Golden Zagreb Award for creativity and innovative artistic achievement to Michael Frei for Kids (Switzerland, Playables production company), pointing out that character animation normally takes a lot of planning and stages, but for this particular film, its creator found other, unique ways to create movement. He used coding and interaction, to play with group processes and the way people influence each other. This use of interactivity allowed the filmmaker to shape not only his creative process, but also the final outcome: a fitting visual logic for his film.

The Zlatko Grgić Award for best first film made apart from an education institution went to the German film Flood by Malte Stein, a surrealist film shows an ugly world where a young man is trying to escape his condition as a dominated person. The dark sense of humor combined with a very particular use of sound and animation give us a unique experience, often uncomfortable, but always fascinating.

The jury members also decided to present special mentions. Boris Labbé’s went to the Canadian film No Objects by Moïa Jobin-Paré, produced by NFB, which choreographs different everyday gestures in a very tactile way. The surface of the film also records and superimposes the animator's own gestures in scratching and painting. “This is a unique audiovisual experience,” said Labbé.

Ruth Lingford was particularly impressed by the Russian film Five Minutes to Sea by Natalia Mirzoyan from the Petersburg Animation Studio, a beautifully observed, and deeply felt piece of humanistic filmmaking. According to Lingford, “The filmmaker reminds us of what it is like to be a child, and the subjective elasticity of time.”

Michaela Müller gave her special mention to the British-French film Roughhouse by Jonathan Hodgson, which takes a stand for solidarity among friends, even if they test your patience to the limit. “Drawing on what they learnt from a childhood game gone wrong, they find the strength to help each other and stand up to the bully,” Müller noted. “Skillful dramaturgy and narration allow us to identify with and care about the characters.”

Tünde Vollenbroek chose the Taiwanese film Si So Mi by Xu-Zhan Zhang, saying, “This film is one of the simple pleasures in life. Its playful design pulled me into its world immediately. And with its quirky characters and morbid ritual, the film is surprising and utterly delightful.”

And finally, Chen Xi gave his special mention to the Croatian film Imbued Life by Ivana Bošnjak and Thomas Johnson, produced by Bonobostudio. “Through its imagery and mise-en-scene of dissolution and embodiment, disappearance and emergence, powerfully conveys feelings, both painful and seductive, of alienation,” Xi said.”

According to the Grand Competition Feature Film jury, consisting of Frank Gladstone, Dine Goder and Dalibor Barić, the Grand Prix went to the Hungarian film Ruben Brandt, Collector by Milorad Krstić. The jury noted, “The award goes to a film that plays with the notion of fine art. This entertaining, out-of-the-ordinary view is satirical while at the same time respects the classical art at the center of the story. For a well scripted detective yarn, cleverly thought out, wonderfully written with imaginative direction, eclectic music score and a design sense that takes chances and is not beholding to anything that has come before.”

The same jury gave its special mention to the French-Belgian-Luxembourg-Cambodian film Funan by Denis Do, a film that could not be more different in subject or tone from our Grand Prize recipient.  Set in the time of the Khmer Rouge's reign of terror in Cambodia, this is a heartrending story of love, loss, sacrifice, the will to survive and the human capability for good and evil, as seen through the eyes of one family, especially the mother, Cho. It also asks us to remember these terrible times, lest we forget and repeat the same inhumanity over again.

The joint jury of the Student and Croatian Film Competition consisting of Nikita Diakur, Vasco Sá and Bruno Razum decided to give the Dušan Vukotić Award for best student film to the Czech film After by Matouš Valchář, made at the Ladislav Sutnar University of Design and Art of Western Bohemia. A raw and direct film about a delicate subject that concerns each and every one of us – said the explanation. The € 1000 cash prize is sponsored by Zagrebačka banka.

The joint jury also gave special mentions to the film Happy Ending, United Kingdom, Royal College of Art by EunJu Ara Choi and Love at the Crossroads, South Korea, Korea National University of Arts by Hee-seung Choi. Happy Ending is an intimate story about the search for feelings and pleasure in a place where these are hard to find, and Love at the Crossroads seems naive and simple, but in fact is a surprising take on young love and compromise.

The best film in the Croatian Film Competition is A Demonstration of Brilliance in Four Acts by Morten Tšinakov and Lucija Mrzljak, an Estonian-Croatian co-production (Eesti Joonisfilm and Adriatic Animation), also winning a € 1000 cash prize sponsored by the Croatian Directors’ Association, and the special mention went to Ivana Bošnjak and Thomas Johnson for Imbued Life, produced by Bonobostudio. Finally, the best Croatian minority co-production went to Balász Turai and The Fall of Rome, a collaboration between the Hungarian Boddah studio and Adriatic Animation from Croatia. The jury noted it was an enigmatic puzzle that falls into place to reveal the absurdity of our constant desire for entertainment. A tactile and well-crafted film about the mystery of the relationship between human and nature. An immersive story about a coming of age family stuck in a surreal and apocalyptic world.

The winner of the newly established VR Project Competition was selected by a jury of David Doutel, Marc Betrand and Milan Gostimir. Their award went to the French piece Accused #2 Walter Sisulu by Nicolas Champeaux and Gilles Porte.

The winners in the Children’s Film Competition were chosen by Nina Bukovina, Sven Fritz, Lara Grgec, Vigo Urbanke and Grgur Valkaj. Their award went to Big Wolf, Little Wolf by Rémi Durin (France-Belgium), and the special mention to the Belgian film Sweet Night by Lia Bertels.

Finally, the Mr M. Audience Award for best film in Short Competition also went to Tomek Popakul for Acid Rain and in Feature Competition to Denis Do for Funan.