Acamar announces the addition of Brown Bag Entertainment and Tandem Films as co-producers on the new series Bing Bunny, based on the series of books by award-winning author and illustrator Ted Dewan. 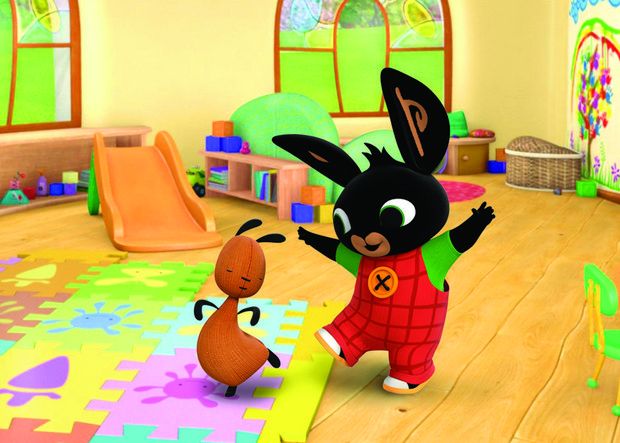 UK-based independent Acamar Films announced that it is working in partnership with both leading Irish animation studio Brown Bag Films and London based Tandem Films to coproduce the much-anticipated new animated series Bing Bunny - based on the hugely popular books by award-winning author and illustrator Ted Dewan.

Acamar will be launching the new show with initial episodes available to view at MIPTV.

The 78 x 7’ series has been meticulously developed for internationally renowned BBC pre-school channel CBeebies, which will be bringing the Bing Bunny books’ unique philosophy and story-telling to television audiences this spring. A number of key global broadcasters are also on board with sales to be announced imminently.

Acamar is developing a high-quality global publishing, licensing and digital campaign for Bing Bunny with several market-leading partners already on board. A multi-territory representation agreement has already been signed with award-winning TLC (The Licensing Company) to develop Bing Bunny with key partners around the world.

Acamar and TLC have already appointed leading international children’s publisher Harper Collins to produce a major multi-format TV tie-in programme for Bing Bunny as well as to re-issue the entire series of Ted Dewan’s original classic “Bing” books. The first of these re-issues occurred in the UK in August 2013, and the second in January 2014, with further book launches planned for the coming months.

Acamar’s CEO, and industry veteran Mikael Shields, has hand-picked the team to bring Bing Bunny to the screen. The project is being series directed by Academy Award-nominated Director Nicky Phelan at Brown Bag Films, series story direction is by Jeroen Jaspaert at Tandem Films, and music for the project is coming from award-winning composer Julian Nott. Lucy Murphy, who has held key roles at King Rollo, EVA Entertainment and Novel Entertainment, is on board as executive producer along with former MD of Nickelodeon UK, Howard Litton, also an executive producer.

Mikael Shields, Bing Bunny’s Producer and CEO of Acamar Films, says, “We looked at over 600 ideas before deciding to option and develop Bing Bunny. It’s a unique project and so we were determined to assemble most talented team possible to adapt Ted Dewan’s insightful books both for the screen, and for a parallel digital life. We did our early visual development work with Nicky Phelan and the team at Brown Bag Films and they’ve been a fantastic partner for us. I’d also worked originally with Daniel Greaves at Tandem Films on “Flatworld” and we were absolutely delighted when they agreed to come on board with Jeroen Jaespart bringing a special focus to directing our series animatics. So, we now have all three studios working on everything from the story ideas, team-writing, voice-recording, dialogue edits, animatics, animation, music and post-production of the show. We’ve set it up to be an incredibly detailed collaboration and I couldn’t be more pleased with the results.”

Nicky Phelan, Series Director, Brown Bag Films, says, “Bing Bunny is a very special project for us here in Brown Bag Films; we helped develop and design Bing’s supporting cast in the early development stages, and are now in full swing of episodic production. Working with Acamar and Tandem has been a thoroughly collaborative and rewarding endeavor. To bring Bing to the screen, we are utilizing high end CG and have an incredibly talented and committed team of artists and production staff in Brown Bag putting their extensive experience in to creating a series we believe Bing’s audience will truly love.

Our aim with this series is to create a believable and relatable cast of characters, led by Bing, whose world is a beautiful but real place. Visual cues are taken from Ted Dewan’s original books, and fused with real world reference while retaining a very specific and original aesthetic.”

Jeroen Jaspaert, Story Director, Tandem Films, says, “We came on board for the initial pilot of Bing Bunny, and I was immediately captured by the refreshing, rich quality of the storytelling, so we were delighted to be able to work on developing the story and animatics for the full season. I wanted to portray a quirky world that had a sense of wonder, but was always recognisable, honest and immersed in realism, ensuring the emotional narrative present in the books was preserved.

The Tandem team set up a 'made to order' production pipeline, to create a new kind of animatic, working digitally, combining 2D characters and 3D generated backgrounds. This, along with the unique creative collaboration of all three companies, allowed us a strong blue print for the CG animation to continue from - ultimately producing a heartwarming and highly original show.”

Bing Bunny celebrates the real-life experiences of young children and the grown ups in their lives in a most authentic way. Bing Bunny is about celebrating the mishaps, mess, energy and wonder of being a relatively new human being with the reassuring exclamation: “It’s a Bing Thing!”.

Each 7-minute episode is a thoughtfully written ‘micro-drama’ which explores what life is really like for a pre-school child; from taking a bath to making a smoothie, these small stories, told onscreen in real-time, and from Bing’s point of view, make for compelling and affecting drama.

The series stars Bing Bunny and his learned, ageless carer and best friend Flop, along with an ensemble cast of Bing’s close friends and the grownups in each of their lives, all of whom have been specially developed by Acamar for television.

Pre-school life is certainly dramatic. So why isn’t pre-schooltelevision? Most pre-school TV is artificially bright and jolly.What would it be like if pre-school TV authenticallydramatised pre-schoolers’ experiences, celebrating themishaps, mess, energy, and wonder?

The Bing books broke new ground, addressing pre -schoolers and adults with “micro-dramas” about their every day lives together.We’re producing something just as ground-breaking for pre-school TV in a formatthat tonally feels like real-time 6-minute video clips on YouTube (without thepushy parents off-camera). Characters speak naturally and authentically for theirage, the laws of physics apply (no magic or fantasy) and we don't shy away fromuncomfortable feelings or events.