Acamar Films Teams Up with El Ocho on ‘Bing’ 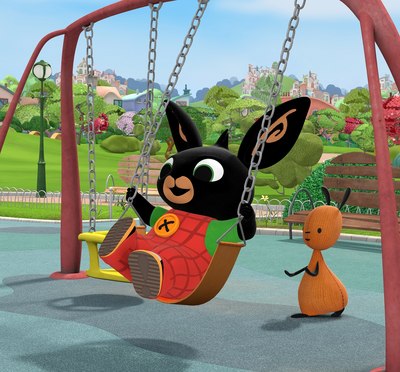 LONDON -- Independent British studio Acamar Films has appointed El Ocho as the licensing and merchandising agent for pre-school International Emmy award-winning Bing in Spain and Portugal. The appointment comes as Bing, Flop and his beloved cast of friends are set to air on Clan TVE in Spain. The series is currently airing on Portugal’s Canal Panda as well as on broadcasters in other key territories around the world, including the UK, France, Germany, Benelux, Israel, Scandinavia, Australia and New Zealand.

Laura Clarke, Licensing Manager at Acamar Films commented, “Bing has enjoyed great success to date and El Ocho is ideally placed to capitalize on the momentum which the property has gained. We are immensely proud of the show and the commitment shown by leading licensees and with El Ocho’s experience in the region and shared passion for Bing, we look forward to developing exciting licensing plans for Spain and Portugal.”

Eva Rubira and Pilar Fernández, Vega co-founders of El Ocho added, “We are so happy to represent Bing in the Spanish and Portuguese territories. The series will air on Clan during the last quarter of this year and we are preparing a licensing program where the first products launch in the second half of 2017. We are sure that Bing will be a great success, the brand has all the needed ingredients for the Iberian market.”

With more than 18 licensees already committed to developing the UK Bing licensing program, alongside global partners Fisher Price and HarperCollins, new additions across key categories will soon be announced in line with airing of TV series and appointment of agents, to develop local licensing campaigns around the globe.

Bing has consistently topped the animation charts with its selection of episodes on the UK’s iTunes store and has had a remarkable 94 million downloads since launch on the BBC’s iPlayer. The DVDs have sold an unprecedented 290k copies, highlighting the series’ unique appeal and resonance with an ever-growing audience of both pre-school children and the grown-ups in their lives.

Bing has been adapted for television from the insightful books by award-winning author and illustrator Ted Dewan. The series has been meticulously developed by a hand-picked team at Acamar in partnership with leading Irish animation studio Brown Bag Films.

Celebrating the noisy, joyful, messy reality of everyday life when you’re a pre-schooler, Bing stories are small but full of drama; micro-dramas depicting everyday events that all young children and the grown-ups in their lives will recognize. Just when Bing thinks he’s got the hang of life, it can swing right back and knock him over.  But it’s okay, as Bing’s companion Flop says, “Never mind Bing, it’s no big thing!”