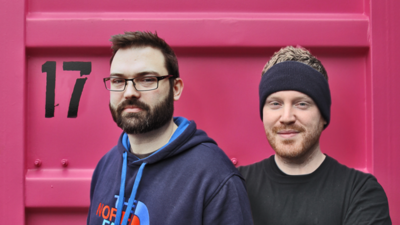 Seattle, WA -- Seattle-based animation studio The Academy has signed London based animation and graphics shop Cub Studio for U.S. commercial representation. Cub Studio is founded by design industry veterans Fraser Davidson and Ben Skinner, whose broad backgrounds in animation and online marketing fuse together a team of talented artists and producers to craft innovative designs for commercials, broadcast promos and branded content. With previous campaigns for such top brands as Vodaphone, Twitter, Mercedes-Benz, ESPN, Bose, GE and BBC, their work has garnered numerous awards including a BAFTA Award as part of the Hat Trick team that produced the BBC’s “The Revolution Will Be Televised” in 2013. Known for their comedic animation work and sports branding, their recent work for ESPN gives a crash course on the history of Cricket just in time for the ICC Cricket World Cup.

Notes The Academy Executive Producer Mike Holm, “I’ve been a fan of Cub’s work for a while now. Obviously their animation and design is top notch, but what really impressed me was the way they so effectively intertwined humor and storytelling. That’s a skill that few have mastered, but Fraser and Ben clearly have it figured out. We are absolutely thrilled to partner with Cub Studio.”

Cub Studio co-founder Fraser Davidson has nearly a decade of experience in the animation industry, having worked at London-based motion graphics, VFX and animation studio Mainframe for 6 years prior to setting up animation collective Sweet Crude. His animation work for major brands including Sony, MTV, BBC, Nickelodeon, Nike and Guinness has earned a number of awards over the years, including several PromaxBDA Awards. He is also the writer and director of the YouTube series “The Alternative Rugby Commentary” and has collaborated on projects with comedians such as Tim Minchin, Bill Maher, Tim Key and the boys of Don’t Drop the Egg. Co-Founder Ben Skinner has over 10 years of experience in online marketing, spanning SEO, Performance and UX in design related fields, bringing a comprehensive expertise in crafting effective design work for digital platforms to Cub Studio.