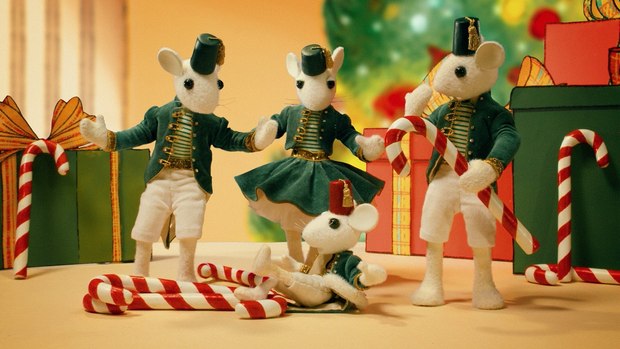 London, UK -- Harrods, the luxury department store, is launching its 2014 Christmas campaign. It will run on Harrods’ website, social media platforms, and in-store from 7th November. The film will also be running in cinemas nationwide.

Created by TBWA\London, “The Land of Make Believe” tells the story of Peter Pumpernickel, a tiny mouse who wants to help Father Christmas. Created using stop-motion animation, the fairy-tale film captures the magic of Harrods during the festive season and tells the charming story behind the world-famous Harrods Christmas lights. Deborah Bee, Director of Marketing at Harrods, said “Christmas at Harrods is a truly enchanting time for everyone. ‘The Land of Make Believe’ brings the festive magic of the store to life, encouraging Londoners to enjoy Harrods as the ultimate Christmas destination that’s perfect for the whole family.”

Peter Souter, Chairman of TBWA\London, added, “Winning Harrods has been a fairy tale for TBWA. So it’s kind of appropriate that our first campaign for them is also a fairy tale… well, mouse tale. The animation is a beautiful, nostalgic take on the store’s traditions. The Harrods Christmas displays are a London icon, and this year’s will be more thrilling than ever.” The spot, produced by A+C Studios, combines handcrafted and original stop-motion techniques with experimental ideas and design. The sets were made from illustrated artwork, which was then constructed in 3D in the studio. The 2D backgrounds gave the animation a real storybook feel, as if the illustrations had come straight off the pages of the Christmas story. The stop-motion animation process took 28 days to complete before going on to the in-house digital team, who created the visual effects as well as removing rigs and blue screens.

Dan Richards, Director at A+C Studios, said ‘“Working on a new Christmas story, which will capture the imaginations of families this year for Harrods, has been an exciting project for the studio. Stop Motion animation has a beautifully nostalgic quality, which I think was perfect for this Christmas story. I’m sure that A Little Christmas Tail excites and inspires children in the same way Christmas animations such as The Snowman and Rudolph the Red-Nosed Reindeer did for me as a child.” The campaign is being launched in the lead-up to Christmas, and will tie in with the store’s most celebrated Christmas traditions, including the Harrods Christmas Grotto and The Festival of Christmas, which launches this weekend.