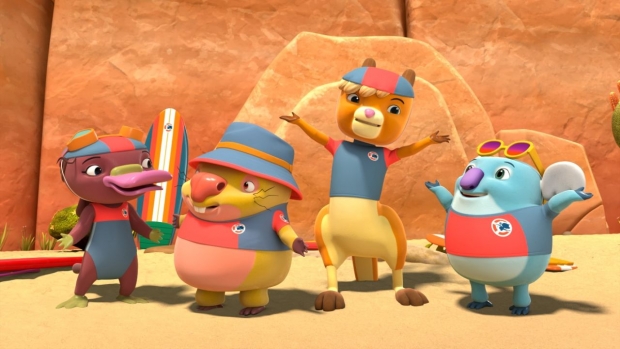 Cheeky Little Media has announced that ABC Kids has greenlit a second season of the popular Australian 3D animated TV series, Kangaroo Beach. The second season will offer more beach-based fun adventures with the four cadets, Pounce, Frizzy, Neville, and Gemma and continue to explore new water safety themes for preschoolers and their families. Australian actor Miranda Tapsell will be joining the cast as a guest character. Season 2 is scheduled for a Summer 2023 release.

“We’re so happy to be heading into Season 2 of Kangaroo Beach,” shared Cheeky Little’s executive producer Patrick Egerton. “Congratulations to the entire Cheeky Little team for making a wonderful show that resonates so strongly with kids and their families. After the rapid success here in Australia it’s madly exciting to see the show make a huge splash in the UK, LATAM and beyond. I think 2022 will be a big year for our little lifeguard cadets!”

Key partners for the Season 2 include the ABC, the Australian Children’s Television Foundation, and Surf Life Saving Australia (ACTF).  ACTF will also distribute the series while Cheeky Little Commercial continues as the global brand manager. New consumer products for the franchise include a book series, kids’ swimwear and clothing, bedding, and toys.

“Kangaroo Beach has quickly become a beloved ABC Kids Brand thanks to the lovable surf cadets who’ve connected via humor and genuine warmth,” noted ABC Head of Children’s Production Libbie Doherty. “The distinctive Australian beach setting is a rich story world with plenty of fun and action to explore beach culture that is relatable to kids all over the world in the new episodes for next summer.”

Kangaroo Beach Season 2 is produced by Cheeky Little Media for the ABC with major production investment from the ABC in association with Screen Australia. The show is financed with support from the Australian Children’s Television Foundation (ACTF), Surf Lifesaving Association of Australia. International sales by ACTF and Infinite Frameworks.