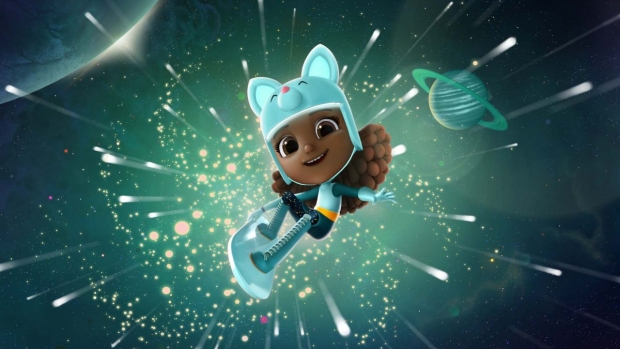 Multi award-winning animation studio and distributor Aardman and co-producers Fabrique Fantastique (Belgium) and Apartment 11 (Canada) have announced deals with multiple international broadcasters to acquire the first season of Interstellar Ella (52 x 11) a CG animated series aimed at kids ages 4-7. The show follows 8-year-old Ella Ryder and her friends’ exciting adventures in space, where they discover as much about themselves as they do about planets and astronomy.

“We couldn’t be happier entering into a partnership with Apartment 11 and Fabrique Fantastique on this exceptional show,” shared Aardman director of distribution Alison Taylor. “Despite not being able to have any face-to-face meetings to pitch the series to our wide network of global partners, the response from the market to Interstellar Ella has been phenomenal. Securing such fantastic partners at such an early stage has enabled the series to get into production quickly, and we can’t wait to see the first episodes start to deliver next summer.

“You can’t give kids a better playground than outer space,” added Apartment 11 executive producer Jonathan Finkelstein. “Young audiences will love the thrilling adventures and come away amazed by what they learn and see about our galaxy in this beautifully designed series.”

In the series, it’s the year 3021 - on a space station somewhere between Mars and Jupiter in the Milky Way, 8-year-old Ella Ryder sets out with her friends on exciting adventures of discovery. And because they are in space, there is lots to experience and even more to explore! Ella’s adventures are fun and emotionally charged, allowing her to discover a little bit more about herself with each unexpected challenge. Challenges that help her understand what makes her as unique as her name: Interstellar Ella!

Created by Adam Long who strives to familiarize kids and their parents with basic astronomy and astrophysics, as they are progressively introduced to planets and their moons, constellations, nebulae, stars, comets, asteroids, black holes, and other galaxies. Artistic director, Olivia Derie, uses genuine NASA footage as a reference for the series design and the production team work closely with science consultant Sara Poirier (MSc in Science Communication and Public Engagement and BSc in Astrophysics).

The series is due to launch internationally in Summer 2022.