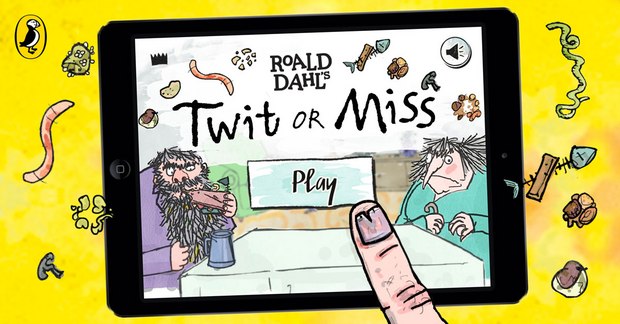 Roald Dahl’s Twit or Miss -- the first-ever app to feature some of legendary author Roald Dahl’s iconic and ever-popular characters -- is released on July 23, in time for the school holidays.

Twit or Miss stars two of Roald Dahl’s most-loved and most DISGUSTING characters -- Mr. and Mrs. Twit -- and features artwork inspired by the iconic illustrations of Quentin Blake. Twit or Miss has been developed jointly by the Roald Dahl Literary Estate and Penguin Random House UK, working with internationally renowned studio Aardman. Twit or Miss can be downloaded for FREE from the Apple App Store and from the Google Play Store.

Existing fans will be familiar with the fiendishly inventive tricks that Mr. and Mrs. Twit play upon another -- whether it’s Mrs. Twit serving up a plate of wormy spaghetti or dropping her glass eye into her husband’s mug of beer, or Mr. Twit cunningly adding bits of wood to his wife’s walking stick to convince her she has the dreaded shrinks.

In Twit or Miss, beardy Mr. Twit is tucking into a hearty meal while his wife, Mrs. Twit, tries to sleep. Every time Mr. Twit eats, some foulsome food flies towards Mrs. Twit. Users score points by stopping the moldy morsels from hitting her. So WATCH OUT…if Mrs. Twit wakes up, she’ll whack Mr. Twit with her stick and then it’s GAME OVER for everyone!

Twit or Miss is utterly addictive, and is a must for everyone with a sense of mischief -- whether they’re existing fans of The Twits or newcomers to the characters and story.

“The Twits are two of the most recognizable and popular of all the characters my grandfather created,” says Luke Kelly, MD of the Roald Dahl Literary Estate and grandson of Roald Dahl. “Their wonderful mischievous, dark humour appeals to children and adults alike. In the original story, the fiendish tricks which they play on each other are part of an ever-escalating game. Working with Penguin and Aardman, we thought we had a brilliant opportunity to develop that into a digital game filled with disgusting food, beards, Twit quips and general app-enabled monstrosity!” “We are absolutely delighted to be working with the Roald Dahl Literary Estate and Aardman for this exciting first for one of the world’s most inventive storytellers, Roald Dahl,” adds Francesca Dow, Managing Director of Penguin Random House Children’s U.K. “The combination of Aardman’s world-renowned animation expertise blended with the mischief, naughtiness and complete disgustingness of the Twits is the perfect combination. I hope that the game encourages children in their millions to join in with Mr. and Mrs. Twit’s tricksy fun.”

“We are very excited to have the opportunity to work with such a well-known and loved brand,” says Aardman creative director Ricky Martin. “Playing a part in the ascension of Roald Dahl’s characters and Quentin Blake’s illustrations to a digital platform has been awesome. Our team at Aardman have all grown up with Roald Dahl’s literature and we are acutely aware of how big and important this next stage is, so we wanted to do it justice. The aim was to create something that would attract new fans to the literature, have lots of surprises for established fans and of course hold its own as a great original game.”

The original book is currently published in 34 languages globally (including Scottish translation, The Eejits) and emerged in a “What Kids Are Reading 2015” survey as the most read book in U.K. primary schools. The book was republished in paperback in June 2015, featuring stinky scratch ‘n’ sniff stickers.