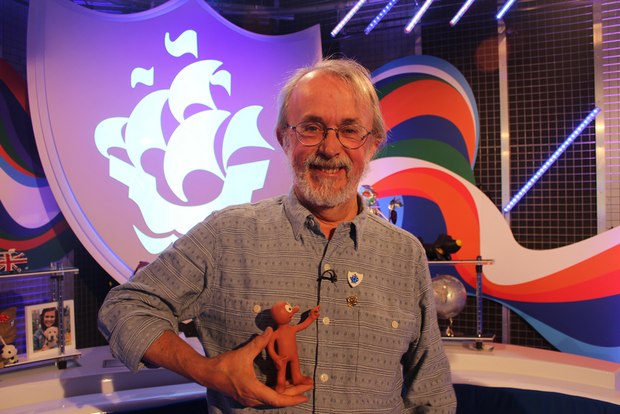 Lord founded Aardman with partner David Sproxton in 1972, which has since created some of the world’s most iconic animated productions, such as Morph, Wallace & Gromit, Chicken Run and Shaun the Sheep. Created and produced for the BBC by Aardman, Morph made his TV debut in 1977 in the children’s BBC program Take Hart alongside the artist and presenter, Tony Hart. Morph was a regular fixture on children’s television throughout the 70s and 80s, and received his own Blue Peter badge in 1981, when Blue Peter presenter Sarah Greene visited the Aardman studios. Morph returned to the BBC in 2014 with 15 new episodes funded by a successful Kickstarter campaign.

Lord appeared on Blue Peter on Thursday, returning with Aardman’s first creation, Morph, who hasn’t appeared on the show for nearly 35 years. Adding to his list of honors, including his very first blue badge received in 1981, Lord’s gold badge is in recognition of his work for British animation on the world stage.

“This is fantastic,” Lord commented on receiving his gold badge. “It’s a dream come true.”

Each year only a few gold badges are awarded in exceptional circumstances for outstanding achievements, or showing amazing and unique bravery, courage and citizenship. Lord joins the likes of the Queen, David Beckham, and JK Rowling on the prestigious list.

“The Blue Peter audience love watching and creating their own animations,” said Blue Peter editor Ewan Vinnicombe. “We are delighted to award Peter his gold badge nearly 35 years after his first appearance on Blue Peter. Peter has created some of the most well-known animated characters including of course Morph, who had a starring role on today’s show.”