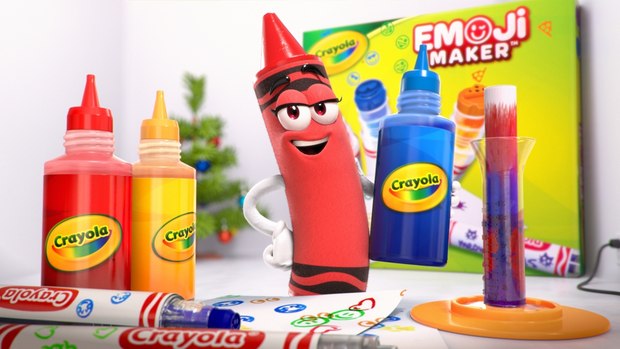 Animation studio Aardman Nathan Love has teamed up with creative agency McGarryBowen to introduce for the first time an endearing cast of colorful characters from the Crayola family that were evolved and reimagined to come to life in a new holiday effort for the brand that’s aptly titled Audition.

The Audition campaign not only reunites Aardman Nathan Love with McGarryBowen, who previously collaborated on live-action/animation projects, but marks the launch of the Crayola brand’s first-ever national broadcast push featuring four distinct, animated versions of its vivid, lovable mascots – Denny, Scarlet, Gus and Rod -- which were previously featured primarily in packaging and in-store displays.

“When this new opportunity for Crayola came around, McGarryBowen reached out for our help during the early stages of development,” explained Aardman Nathan Love Founder/Executive Creative Director Joe Burrascano about the campaign, which is intended to forge a deeper connection with parents and kids by evoking nostalgia and bringing to life the delight of creativity mixed from childhood with a touch of adult humor. “We were tasked with redeveloping the characters by refining their designs and infusing each color with fun, identifying features as well as unique and endearing personalities for their animated debut.”

Canvassing the color spectrum, Audition features the amusing array of Crayola characters trying out for a plum role as a brand spokesperson while highlighting two all-new Crayola products, the Air Marker Sprayer and the Emoji Maker. “One of the challenges was introducing so much in a short 30 seconds,” said Aardman Nathan Love Creative Director Anca Risca. “Not only is it a lot of characters to introduce separately, but the Air Marker Sprayer and the Emoji Maker take time to show in use. The Audition idea became the perfect format for this because we can cut from one vignette to the next mid-action.” To fully immerse themselves in the assorted Crayola characters, the Aardman Nathan Love team took an interactive approach by embarking on a road trip to experience the brand firsthand. “At the very start of the project, we decided to take a day off of work and bring the entire studio on a field trip to the Crayola Experience in Easton Pennsylvania,” Burrascano added. “It was a blast! Not only was it an amazing team building exercise, but being there really made us better appreciate our clients and the brand they represent. The level of engagement and attention to detail made us really proud to be a part of this great company’s legacy, and to help push it forward.”

According to Risca, the collaboration with McGarryBowen on Audition was so fruitful that it not only produced the 30-second spot, but a fun series of “outtakes”, several short internal videos, and a host of print and digital material. “Working with McGarryBowen was a lot of fun,” she recalled. “The process was highly collaborative, with everyone on both sides giving their best for a brand we all really love and believe in. Both their creative and production teams have been very focused on delivering the best, most appealing possible product, and the end results show.”