Aardman partners with NatWest to create Pigby's Fair, a fun smartphone and tablet app for children to help them learn about saving money. 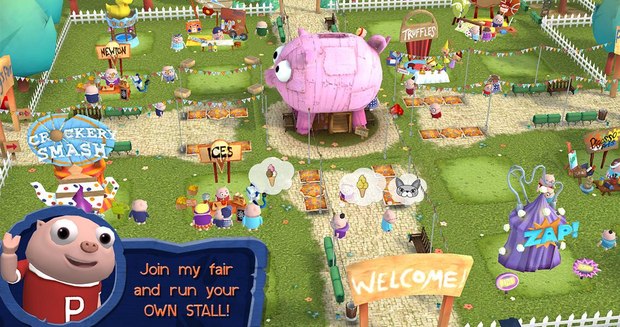 NatWest has become the first UK bank to launch Pigby's Fair, a fun smartphone and tablet app for children, to help them learn about saving money.

Produced and designed by the makers of Wallace and Gromit - Aardman Animations - the app features NatWest’s new animated savings characters, Pigby and Friends. The characters were introduced at the end of last year during the launch of NatWest’s First Saver account, which aims to inspire children to save money.

The free-to-download app aims to help children learn about saving money through a fun game that features the user as a boy or girl pig character running a stall in an animated fairground. Pigby’s friends hold other stalls so players can check how much his friends have saved and what they’re saving for to inspire and spur them along.

The user is guided by Pigby through a fictional journey where he or she starts by selling ice cream at the fair to earn money and then faces opportunities to spend or save, with saving bonuses being offered at various points. In every five minutes of gameplay the child is taken to the Pigby Bank to deposit some of their hard earned pocket money. They are also able to set their own saving target for new or upgraded stalls and upon reaching their goals they unlock new items and levels to allow them to progress further.

Based on the insight that nearly two-thirds of UK parents (68%) are worried about the long-term financial security of their children[1], the Pigby’s Fair app has been created to help parents educate their kids on how to manage their finances from a young age so that they are better prepared for later life.

Research conducted by NatWest also found that a fifth (20%) of children aged 5-10 would like to save but can’t stop themselves from spending and over half (58%) say they are more likely to spend money received at Christmas rather than save it.

Heather Wright, Executive Producer at Aardman Animations says, “Our core audience is children, so creating the Pigby’s Fair app was the perfect project for us. We wanted to use a concept that children would enjoy and we felt a game based in a fairground was an ideal platform to educate young ones.”

David Crawford, Head of Savings at NatWest, says, “We appreciate that the idea of discussing money management may not be an interesting topic for children and that can make it difficult for parents to teach. We want to help parents give their children the best possible opportunities in a time where preparing for our financial future is considered so crucial.”

“Aardman Animations were the obvious partner to create our innovative app and the Pigby and Friends characters. Aardman bring the ability to capture childrens’ imaginations and we at RBS bring the savings expertise to help parents teach the next generation to save.”

The app, Pigby’s Fair, is available now and is free to download for everyone (not just customers) on both Apple app store and Google Play.