#CelebrateNationalLottery25 offers people a chance to make a difference in their own communities. 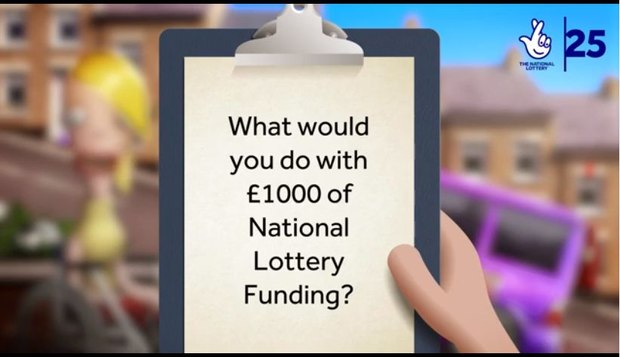 BRISTOL, UK -- Award-winning animation studio Aardman, has unveiled a new film to mark a special £2 million National Lottery fund. The fund, called #CelebrateNationalLottery25, celebrates the National Lottery’s 25th birthday. Open to anyone with a great idea on how to make a difference in their community, the fund offers the chance to receive £1,000 to help turn an idea into a reality. The message is that no individual or idea is too small to make a big difference in their community.

The film, directed by Aardman’s Peter Peake, uses 2D animation to detail what four people would do if they had £1,000 to use in their community. Known for their craft and storytelling, the team at Aardman designed a range of diverse and inclusive characters representing people and communities reflecting modern UK. The script was informed by qualitative research from members of the public across the UK.

“It’s truly a privilege to support a fund that literally anyone can apply for to bring their community together,” commented one of the film’s actors, comedian James Acaster. “This film embraces the diversity in our local communities and highlights the importance of coming together as neighbors, so I hope it inspires lots of people to seek funding for their idea.”

"#CelebrateNationalLottery25 presented such a fantastic opportunity to create a film with a far reaching and positive message,” added Aardman director, Pete Peake. “I’m so proud that we were able to use Aardman’s expertise to depict a real cross section of characters from across the UK and show how, despite all our quirkiness and little idiosyncrasies essentially, we’re all united through common goals. It’s been one of my favorite projects to have been involved in and I hope it’ll inspire people to make a positive change that’s ultimately right at their fingertips.”

“For 25 years, The National Lottery has been helping communities to thrive in every corner of the UK – from the inner city to remote islands, and everywhere in between,” stated The National Lottery Community Fund chief executive, Dawn Austwick. “That’s why the fund, #CelebrateNationalLottery25, is to say happy birthday and to inspire anyone and everyone to make their idea for their community a reality.”