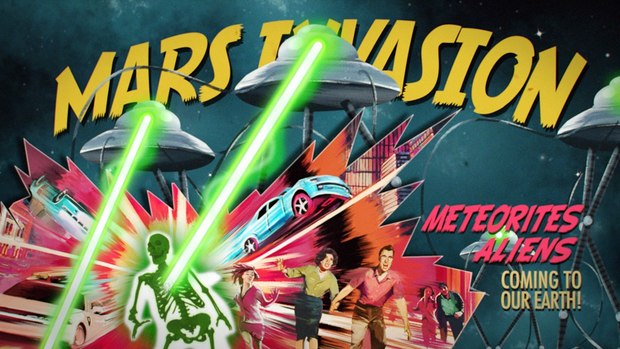 BRISTOL, U.K. -- Aardman has produced a stunning animation for BBC Radio 4 to accompany their season of Mars programs, which launched this past weekend. The bold pulp-fiction style film, narrated by William Shatner, takes the audience on a fact-fueled cosmic journey to the mysterious red planet.

The three minute short, which was commissioned by BBC Radio 4 to celebrate all that is mysterious and evocative about Mars, is colorful collage of live action and animation set to music that takes the audience through an exciting visual journey covering interesting facts and trivia about one of the most contemplated planets in our solar system. Continuing their ongoing relationship with BBC Radio 4, William Shatner on Mars is the third film Aardman have created for the broadcaster that showcases the exceptional and diverse talent of the studio’s stable of directors. Designed and directed by Aardman’s Danny Capozzi, the concept features an explosive graphic look, vintage style typography and a low-fi cut out animation technique that pays homage to the b-movies of the 1950’s.

Capozzi was delighted to be given such an open design brief for the film, ““It’s not often you get a free reign on a wonderful brief, better still a three minute film about Mars. BBC Radio4 were planning a Mars season and only ten weeks ago commissioned me to create a factual sci-fi animation with an impactful graphic edge using B-Movie and pulp /sci-fi comic references. The final piece is a retro mash up mockumentary and the icing on the cake was that the legendary William Shatner came on board to do the voiceover!” The commissioning editor for Radio 4 digital, Rhian Roberts said, “We love Danny’s colorful, bold interpretation of the brief; it presents Martian facts in a whole new way, shouting out to a different audience. The design has informed all the online content and helps the Radio 4 Mars programs hang together beautifully. Again it’s been a total pleasure to work with Aardman, we enjoy the creative journey we go on together.” BBC Radio 4’s Mars season runs from Saturday 4th March to Sunday 12th March 2017.

Aardman continue to focus on growing their work-for-hire business beyond traditional advertising commissions, producing visually stunning content with strong stories and characters for brand partners and other organizations of all kinds.