Kuwait-born, U.S.-educated psychologist Dr. Naif Al-Mutawa is awarded the 2014 Islamic Economy Award for ‘THE 99,’ named by ‘Forbes’ magazine as one of the Top 20 Trends Sweeping the Globe. 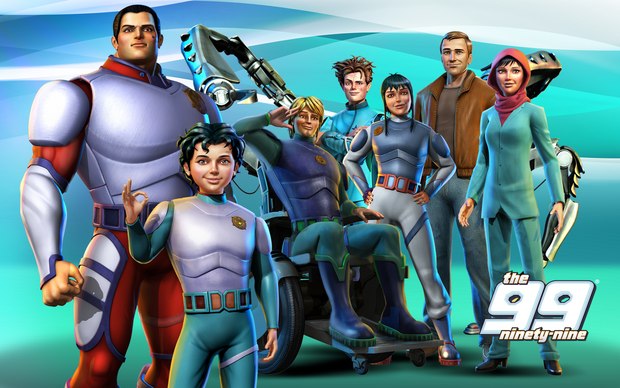 DUBAI -- THE 99 is proud to announce that Teshkeel Media Group was the winner of the Media category of the 2014 Islamic Economy Award. Kuwait-born, U.S.-educated psychologist Dr. Naif Al-Mutawa, the creator of THE 99, received the award from His Highness Sheikh Mohammed Bin Rashid Al Maktoum, Vice President and Prime Minister of the United Arab Emirates and Ruler of Dubai at the Islamic Economy Award Ceremonyin Dubai on January 14th at the Ritz Carlton in Dubai.

The Islamic Economy Award has eight categories in all, and recognizes innovative world-class business initiatives and ideas that have contributed to the social and economic welfare of the Muslim population.

The 99 is a comic book about a group of superheroes based on Islamic archetypes.

Forbes named THE 99 as one of the “Top 20 Trends Sweeping the Globe” and President Barak Obama praised Dr. Naif Al-Mutawa and THE 99 as perhaps the most innovative of the thousands of new entrepreneurs viewed by his Presidential Summit on Entrepreneurship in Washington D.C. The story of the creation and development of THE 99 has been covered by thousands of international media outlets and has received a lot of positive attention globally, leading to an animated series produced by Endemol UK that aired in 70 countries in various languages.

THE 99 were created as positive role models for the world’s children offering universal themes of tolerance, teamwork and diversity to a worldwide audience. THE 99 superheroes hail from different countries and cultures from across the globe. Each character possesses one of 99 superpowers loosely based on the 99 attributes that Muslims apply to their understanding of God. These powers are qualities that all of humanity values and resonates with -- powers such as wisdom, mercy and kindness. Neither the comics nor the series however, have any mention of religion and are of an entirely secular nature. They are stories of teamwork and tolerance and a good-versus-evil struggle understood by all societies and cultures. In 2010, THE 99 stood cape to shoulder with Batman, Superman and the rest of the JLA and fought against evil in a six-issue crossover series.