Blockbuster Marvel feature that almost launched its own Popular Film category at the Oscars racks up seven Academy nods, including a groundbreaking nomination for production designer Hannah Beachler. 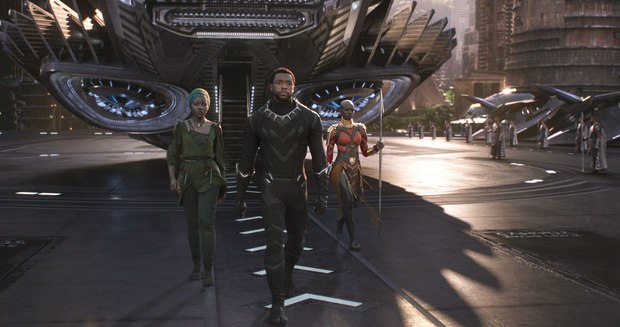 For those of us firmly ensconced in the world of comic books and superhero movies, one of most satisfying moments from this morning’s Oscar nominations announcement was Black Panther getting the nod for Best Picture, one of the film’s seven nominations and a first for Walt Disney Studios, Marvel Entertainment, and comic book superhero tentpole films.

In light of the Academy’s recent ill-fated decision to add a Most Popular category -- spurred in big part by Black Panther’s success -- a universally derided attempt to address constant criticism that Academy voters routinely ignore fan-favorite films that generate huge numbers at the box office, the Ryan Coogler-directed film’s Best Picture nomination is especially rewarding, and important. The fact that the Marvel comic-inspired action-adventure stands on its own against industry darlings like Roma and Vice is even more startling given that the film wasn’t even nominated for Best Visual Effects, a snub to many observers despite a crowded field of 10 shortlisted films, any one of which would have been a worthy selection.

“Thank you so much to the Academy for this honor,” Black Panther producer Kevin Feige commented on the nominations. “This extraordinary recognition is an endorsement of what Black Panther represents for inclusion and for telling different kinds of stories. It has been humbling and gratifying to see the cultural impact this film has had, and it’s something we’re all very proud to have been a part of. This could not have happened without our amazing cast and crew and our brilliant director, Ryan Coogler, who brought his unique talent, experience, and deeply personal vision to this story. And of course, I have to thank Stan Lee and Jack Kirby for bringing this character into the world to begin with.”

“Congratulations to all of our nominated films, and especially Black Panther,” Iger. “To see it recognized by the Academy today with seven nominations, including Best Picture, is truly an honor. Congratulations and gratitude to Kevin Feige and the team at Marvel Studios and to our director, Ryan Coogler and his incredible team and brilliant cast -- we’re grateful for their creative excellence, unparalleled artistry, and heartfelt passion for this project.” Walt Disney Studios CEO Bob Iger said in a statement.

“It’s wonderful and humbling to see so many of our films recognized by the Academy this morning with 17 nominations across eight films, including a Best Picture nomination for Black Panther and Best Animated Feature nominations for Incredibles 2 and Ralph Breaks the Internet,” added Disney chairman Alan Horn. “Congratulations to all of our nominees and the exceptional teams behind these films.”

Black Panther wowed audiences and critics for a bevy of reasons: thought-provoking narrative driven by the collision of Afro-centric cultural and technological forces; strong, deep and well-written characters portrayed with great emotion and range by an ensemble of talented actors; and beautifully conceived and animated visuals highlighted by a uniquely designed hidden African country, Wakanda, that seamlessly and gracefully integrated African design, cultural aesthetics and symbolism with whiz-bang future-tech any sci-fi geek would love. A sophisticated and elaborate VFX-driven film with a talented but young director, Black Panther, more than any similar genre piece to date, had much to prove -- the film’s critical and financial successes were certainly far from a fait accompli.

Hannah Beachler also made history this morning as the first African-American to be nominated for Best Achievement in Production Design -- her selection comes as no surprise, given Black Panther’s vibrant and colorful design aesthetic and sheer enormity of innovative environments, cityscapes, costumes and props that capture and weave together Africa’s inherent beauty with the sleekest of future world concepts. Along with fellow nominees First Man (Nathan Crowley and Kathy Lucas), The Favourite (Fiona Crombie and Alice Felton), Mary Poppins Returns (John Myhre and Gordon Sim) and Roma (Eugenio Caballero and Bárbara Enrı́quez), Black Panther and Beachler are potent and welcome examples of how diversity in movies and movie making can positively and uniquely impact audiences across the globe.

“I am so incredibly honored that our work in Black Panther is recognized by the Academy,” commented costume designer Ruth Carter, who received a nomination for Best Costume Design. “Especially for this film. The film meant so much to so many people who are not members of the Academy. Those were not only the Marvel fans but also the people of Africa and African Americans. It’s wonderful to know that the costumes were appreciated everywhere.”

“It is an overwhelming privilege to be nominated by the Academy for my work on Black Panther,” added composer Ludiwg Goransson, who received an Oscar nomination for Best Score. “I share this honor with the brilliant musicians across the globe who performed on the score. My deepest thanks go to Ryan Coogler, a true visionary and great friend, who created one of the most unique and important films of our time. He encouraged me to venture into uncharted musical territories and to combine diverse worlds of sound into a score that pushed my creative limits.”