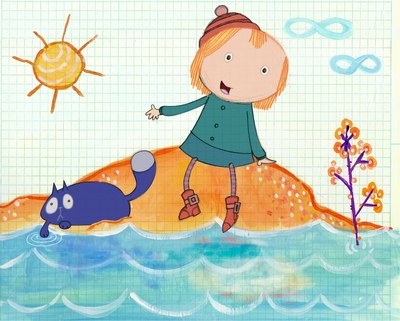 TORONTO -- 9 Story Media Group has announced that its animated preschool series Peg + Cat (80 x 12’) has been acquired by Discovery Kids for Latin America, including Mexico, Brazil, and Argentina. The series originally debuted on PBS Kids in the fall of 2013 and recently won 3 Emmy awards, including Outstanding Pre-School Children’s Animation Program. Peg + Cat recently premiered on Discovery Kids in Brazil and Argentina with other markets expected to follow later this month.

The series follows an adorable spirited little girl, Peg, and her sidekick, Cat, as they encounter unexpected problems that require fun and creative solutions. In order to solve the problems, Peg and her cat must add, subtract and apply basic arithmetic. Their adventures take them to historical far-away lands, art centers in bustling metropolises and the colourful cosmos, all the while demonstrating that it’s never too early to start learning the magic of numbers.