9 Story Announces New Deals for ‘Fugget About It’

9 Story Entertainment announces new deals on its animated primetime comedy ‘Fugget About It’ as the series moves into production on its third season. 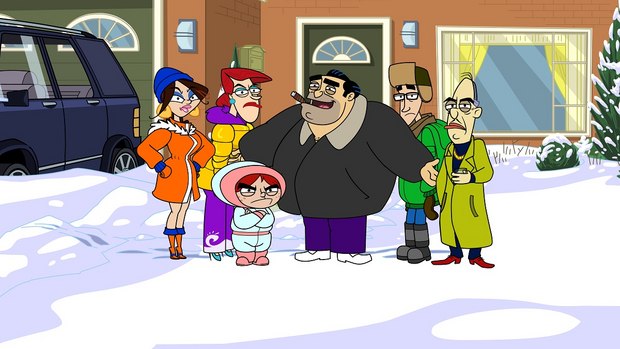 Toronto, Canada -- 9 Story Entertainment has announced new deals on its animated primetime comedy Fugget About It (26 x 22’) as the series moves into production on its third season. Licenses include a home entertainment deal with Entertainment One (eOne) as well as an e-commerce site with Monetyze.  eOne will be releasing the first season of the series in Canada on DVD September 30, while the e-commerce site is now available at www.fuggetaboutittv.com. The site will feature Fugget About It drinkware, t-shirts, iPod cases and more.

Fugget About It is a hilarious animated primetime sitcom about the misadventures of Jimmy Falcone, a former New York mob boss, and his family who must enter a witness protection program in small-town Canada. The Falcones are now the “MacDougals” and it’s not easy going from glorified gangsters to neighborhood nobodies. It’s a fish out of water story, except these fish are sharks!

9 Story both produces and distributes the series internationally. Originally developed for the TELETOON at Night Pilot Project, Fugget About It was created by Nicholas Tabarrok and Willem Wennekers, and developed by Jeff Abugov. Executive producers are Nicholas Tabarrok, Willem Wennekers, Jeff Abugov and for 9 Story, Vince Commisso and Steven Jarosz. Series guest stars include Howie Mandell, Alan Thicke, Andrea Martin and Jason Jones (The Daily Show with Jon Stewart). The first two seasons are also available in the U.S. as a Hulu Original series at www.hulu.com/fugget-about-it.