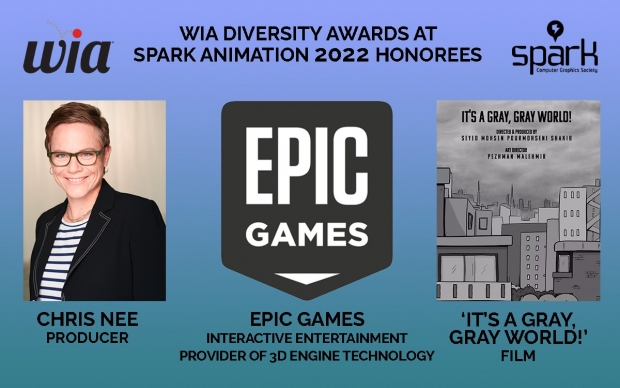 Women in Animation has announced the sixth annual WIA Diversity Award recipients, presented in partnership with the Spark Computer Graphics Society (Spark CG) the awards will be presented by WIA Head of Operations Jena Olson in a taped presentation made available online from the first day of SPARK ANIMATION 2022. The full event runs in person, and via livestream, from October 27-30 in Vancouver.

The WIA Diversity Awards were established to recognize and honor individuals, films, and organizations that have made a significant impact in expanding the diversity of voices in the art and industry of animation, either through their own creative work, by fostering the work of others, or by leading diversity initiatives that enrich our industry and society.

“For the last six years, the WIA Diversity Awards have shined a spotlight on those individuals and organizations putting in the work to make the animation and VFX industries a more diverse and equitable place for all people to prosper and create. They are cultivating a culture where rich storytelling can thrive,” said Marge Dean, President of WIA.

Nee has had a storied career working with some of the most influential and educational studios in the industry including Sesame Street, Disney Junior, and Nickelodeon. Throughout that time, Nee has been committed to inclusion and genuine representation in the genre of animation.

"As we get older our priorities change, and nothing could make me prouder at this point in my career than to be recognized for working to bring new voices, diverse voices, to the table,” said Nee. “A huge thank you to WIA and the Spark Animation Festival for the huge honor.”

World-renowned for its work within the gaming and VFX industry the company runs one of the largest games — Fortnite — with over 350 million accounts and 2.5 billion friend connections. In addition, Epic Games actively works toward making 3D engine technology accessible to as many creatives as possible. Through its flagship programs, “The Unreal Educator Accelerator: Arts, Media, and Entertainment Workforce Training Initiative” and the “MegaGrants Program,” the organization has removed some of the barriers facing many marginalized creatives looking to work in the gaming and VFX industry.

Born in Rasht, Iran, Shakib began his art career at age 17 becoming a member of the Iranian Young Cinema Society. His focus as a filmmaker has been elevating the voices of marginalized people through his art.

In his latest film, It’s a Gray, Gray World, he presents a monochrome gray world where a discreet young man's colorful identity is accidentally publicly exposed by a playful child accidentally. The frightened gray community calls the police to arrest the young man, but he is able to escape only to return to fight for his full freedom.