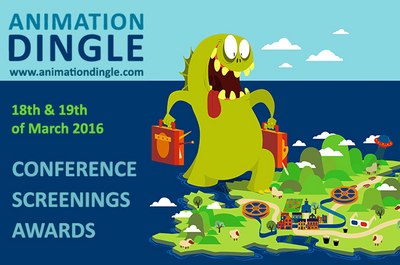 Over the course of the two-day event key decision makers from Amazon, BBC, Disney, RTÉ and Nickelodeon will share insights into the many opportunities that exist in this growing and vibrant sector. Students will get to mingle with industry professionals in a thought provoking, inspiring and fun environment.

Many industry leaders from Ireland and abroad attend Animation Dingle to discover new talent and inspire future creative partnerships. Events like the speed pitching session and numerous workshops over the two-day festival help to prepare the students for a career in animation. The festival also celebrates their creativity with the Animation Dingle Student Awards. Animation Dingle hopes to prepare young animators to grow the already successful story of animation in Ireland and internationally.

This year, creative masterclass panels include:

Co-Founder of Animation Dingle and CEO of JAM Media John Rice commented, “We’re chuffed with the quality of the speakers, the large attendance and the quality of the screening and awards. Animation Dingle has really struck a chord with both students and industry at home and internationally. Of course, it would not be possible without the support of bodies like Enterprise Ireland and the IFB among others.”

Dedicated to the man who is affectionately known as the father of Irish Animation, the Murakami Award recognizes outstanding achievement in animation (recipients include Jimmy T. Murakami The Snowman, Richie Baneham Avatar, and Tomm Moore Song of the Sea).