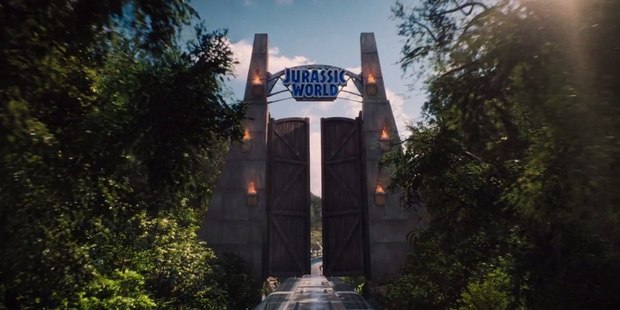 The most prominent were the gates that welcomed visitors to the prehistoric theme park Jurassic World. Those gates, which needed to appear massive on screen, were actually “miniature” 19-foot set pieces built at 32TEN under the supervision of model maker Mark Anderson.

While the size of the piece was nothing new for 32TEN model makers, Jurassic World director Colin Trevorrow and Industrial Light & Magic (ILM) VFX Supervisor Tim Alexander wanted to make sure the doors looked exactly as imagined. “It took a while to get the exact look for the concrete and the aging of the wood,” explains 32TEN Studios Executive Producer Tim Partridge. “But, after a couple of go rounds they looked great.”

Once designed and built, the double doors were mechanized with motion control in order to open at exactly the right time to let the monorail pass through. The gates were set up on the main stage at 32TEN and shot using the motion control system to ensure the effects shots matched the location shots.

The flames for the torches on the gate pillars were shot separately, each with its own motion-controlled move, for later compositing. “Colin felt it was important for the gates to be real,” explains ILM’s Alexander. “32TEN did a great job building them.”

Trevorrow and Alexander also tapped 32TEN Studios to shoot a number of practical scale explosion elements, green screen shots with extras and stuntmen, background plates in northern California locations, and a handful of other practical elements to fill shots, particularly when the elements were near the camera.

“Explosions are always fun to do,” says 32TEN Studios’ Practical FX Supervisor Geoff Heron, “and we have done a lot of them over the years. Tim [Alexander] was very precise in what he wanted, but he also understood that there’s always a chance that something beautiful can happen with a practical effects shoot.”

ILM’s Alexander was pleased with the efforts. “32TEN added just what we needed to add to our CG shots to create the action that Colin desired for the film.”