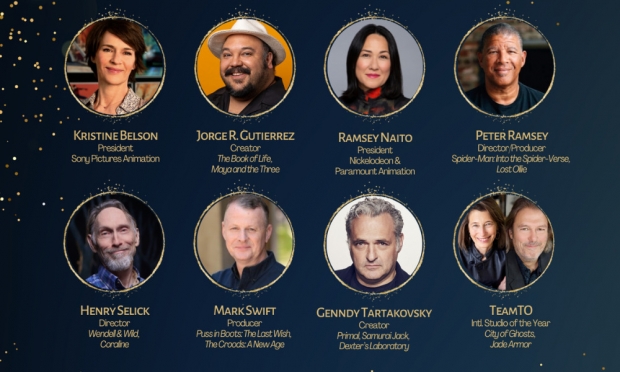 The 2022 World Animation & VFX Summit has announced this year’s Hall of Fame awards recipients and the panelist line-up for this year's event, which takes place in person November 6 – 10. The Summit kicks off with the opening night gala on November 6, where the honorees will receive their awards. Following the gala, the Summit will feature three days of keynotes, panels, networking breakfasts, lunches, and parties with executive and creative talent representing various aspects of the industry.

This year’s 2022 Animation Summit honorees are:

Kristine Belson: President of Sony Pictures Animation – Under her leadership, the studio has seen the release of Spider-man: Into the Spider-Verse, Mitchells vs the Machines, Vivo, and Hair Love.

Jorge R. Gutierrez: Writer-director of Netflix’s Annie Award-winning limited series Maya and the Three, director of the feature The Book of Life, and co-creator of Nickelodeon’s Emmy-winning show El Tigre: The Adventures of Manny Rivera.

Ramsey Naito: President of Nickelodeon and Paramount Pictures, Naito has been a driving force behind movies such as Teenage Mutant Ninja Turtles and PAW Patrol: The Movie and popular shows such as Star Trek: Prodigy, Big Nate, Santiago of the Seas, and Kamp Koral.

Henry Selick: The Academy Award-nominated director of the stop-motion classics Nightmare Before Christmas, Coraline, and James and the Giant Peach, and Netflix’s new feature Wendell &Wild.

Mark Swift: DreamWorks Animation producer whose credits include Penguins of Madagascar, Captain Underpants: The First Epic Movie, The Croods: A New Age, and this year’s Puss in Boots: The Last Wish.

“It has been so rewarding to see our Animation Summit grow and flourish with each passing year,” said Summit founder and president and publisher of Animation Magazine, Jean Thoren. “Despite all the challenges our industry has faced over the past year, 2022 has been quite an amazing year in terms of the range and high caliber of all the new animated movies, series, and shorts available to fans of the medium. Once again, we are thrilled to be able to celebrate and spotlight the vitality of our business and community and to spotlight the achievements of the creative forces in the animation industry. We can’t wait to catch up with all our friends in the worldwide animation community and learn about the their latest innovations and thrilling new projects at the Summit this year.”

Panels will focus on advances in new animation technologies, co-production opportunities, how to pitch animated projects, and a look at the latest adult animation boom, as well as the 2023 business survival guide on how to produce your animation project.

The Summit will include talks with the directors, producers, and key creatives on this year’s Academy Awards contending animated films. Including sessions around the “making of” The Bad Guys, Guillermo del Toro’s Pinocchio, Lightyear, Puss in Boots: The Last Wish, Wendell & Wild, Luck, Marcel the Shell with Shoes On, My Father’s Dragon, The Sea Beast, Strange World, and Turning Red.

A spotlight on award-winning animated shorts of the year will include Black Slide, Christopher at Sea, The Ice Merchants, Mr. Spam Gets a New Hat, My Year of Dicks; The Boy, the Mole, the Fox and the Horse, Sierra and The Flying Sailor.

The Animation Summit will present speaker sessions discussing prominent topics in animation and VFX – a complete list of the speakers is available here.