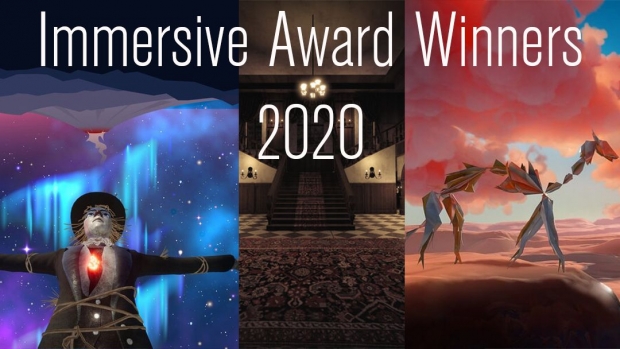 Celebrating its 5th year, Raindance Immersive is the only film festival to recognize and award VR on this scale. The event recognizes the creators and game developers who are pushing the artistic boundaries of the medium of XR, enhancing the art of storytelling in bold and daring ways. This year the festival ran from October 28 – November 22; it was comprised of immersive VR games and experiences, competing for 10 jury awards, as well as the Spirit of Raindance Award, which is selected by the festival team. These awards celebrate the creativity, ingenuity, and artistry expressed in immersive storytelling, world building and games over the last year.

“This year virtual reality has grown more than ever,” commented Raindance Immersive curator Mária Rakušanová. “From AAA games with mind-bending physics, to virtual theatre performances with live actors and full body tracked avatars, we’ve seen a huge expansion of innovation and creativity. We’re living in unprecedented times. When we’re unable to gather in person, VR has turned social distancing into ‘social instancing’, bringing us all closer together.”

Hosted at the virtual Raindance Embassy in VRChat in the presence of nominees and jurors, the 2020 Raindance Immersive award winners were announced at three separate award ceremonies. The winners were selected by an international panel of jury members including award-winning VR director Eliza McNitt; Kent Bye from Voices of VR podcast; and Ana Ribeiro, game designer of the popular indie games Pixel Ripped 1989 and Pixel Ripped 1995.

A one-of-a-kind immersive theatre experience, Tempest is a live, interactive, and intimate VR show inspired by Shakespeare’s famed tale. To bring your guide Prospero to life, the actor must enlist the help of the audience. The line between real and virtual, and truth and fiction, blur as audience members are ‘cast’ as Prospero’s spirits to realize an interactive, virtual version of the story.

From a multiple award-winning VR team and Oscar-winning special effects team, Fly enables you to become a time-travelling pilot - from the earliest imaginings of Leonardo da Vinci and his ornithopter, to the Wright Brothers’ success on Kitty Hawk Beach and, ultimately, into one potential future of flight.

The story of a short-sighted child with an exceptional talent for music, who must find his way through the world of darkness to bring back his sister. A story of inspiration, intuition, and emotion, it explores how these qualities are often invoked by music.

The Devouring is VR horror game created on the social platform VRChat and supports up to four players. After embarking on a road trip that goes wrong‚ you are led into a mysterious manor. In its guest room, there is a letter warning you not to leave. Created by Lakuza, Fionna, Legends and CyanLaser, a group of friends who have been making worlds for VRChat independently since 2018 and decided to team up for this collaboration. None had backgrounds in game development before, but they combined their skills in modelling, animation, logic and music to create a completely original experience.

Stepping into the shoes of newly recruited secret agents for the Virtual Intelligence Agency, players jump into their first mission: investigating Dr. Crumb's School for Disobedient Pets. Disguised as adorable animals, agents find themselves swept into a maze of puzzles and games that put their brains and brawn to the test.

Somewhere in the abyssal depths of the internet, wildlife has blossomed. You are the first human to set foot in this mysterious ecosystem. Join forces with intriguing and endearing creatures to solve the puzzles of Paper Beast. Created by Eric Chahi, a videogame artist who loves bringing innovative titles to players and exploring new fields. His significant gaming contributions are Another World and From Dust.

An exciting new adventure game developed explicitly for VR. Through the use of complex puzzles, enthralling characters and the exploration of a steampunk dystopia, players have the opportunity to immerse themselves fully in an adventure story like no other.

Scarecrow is a theatrical VR experience with a live actor for up to three players. Evil firebirds attacked the town and ate up all the villagers’ hearts! One scarecrow has waited hundreds of years for someone to save him. Working as a team with other players, you must now break the spell by befriending the scarecrow and returning the hearts to the townspeople.

Raindance gives further recognition in honor of all those who are creative and productive members of the VRChat Community. VRChat currently features over 25,000 community created worlds, providing opportunities to interact with people all over the world, and to experiment with identity by trying new avatars – hence many users report that VRChat has helped overcome social anxiety. Collectively, the VRChat community embodies the vision, the ethos, and the spirit of Raindance, hence they are worthy of an Honorable Mention.