Through June 14, Retina Latina and Filmin platforms are streaming the three contending animated shorts, along with past category winners from the first two festival editions. 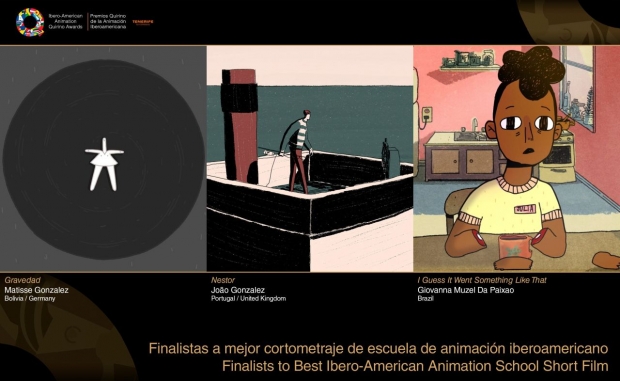 Finalists for Best School Short Film category in the third edition of the Ibero-American Animation Quirino Awards will be available online through June 14 on both the Retina Latina and Filmin digital platforms. In addition to the three competing animated shorts, category winners from the previous two festivals will also be available, all highlighting the future of Ibero-American regional animation.

The three films vying for the award are: I Guess It Went Something Like That, a short film by the Brazilian Giovanna Muzel Da Paixao, a production of the Brazilian Center for Arts UFPEL; Gravedad, a short by Bolivian Matisse González made at the German school Filmakademie Baden-Württemberg; and Nestor, a film by Portuguese João Gonzalez made at the British Royal College of Art that is also a finalist in three technical categories - animation design, visual development and sound design, and original music.

Previous category winners now available for streaming are: the 2018 winning Argentinian film Tántalo by Juan Facundo Ayerb and Christian Krieghoff, produced at the University of Buenos Aires; and the 2019 winning Spanish film Patchwork, directed by María Manero Muro, produced at the Polytechnic University of Valencia.

Ibero-American Animation Quirino Awards are running online from May 25 – June 27. The event, sponsored by the Cabildo de Tenerife through the Tenerife Film Commission, had planned to celebrate its third edition on April 18 in the city of Santa Cruz, but has had to modify its celebration date and format as a consequence of the global COVID-19 pandemic. The month-long event has been dubbed the Quirino month.

Retina Latina is a digital platform for Latin American cinema, available free to the public in Latin America and the Caribbean, with part of its collection available worldwide. This platform, formed by cinematographic entities in Bolivia, Ecuador, Mexico, Peru and Uruguay under the coordination of the Cinematography Directorate of the Ministry of Culture of Colombia. A brief registration is required. Since March 2020, Retina Latina has published an App available through both the Play Store and App Store; the Quirino Awards can be visited from the App as well as from retinalatina.org.

The Quirino Awards channel is available free for all Filmin subscribers in Spain and Portugal. Filmin is an award-winning online cinema and series platform that has been operating in Spain since 2008 and in Portugal since 2016 with the support of MEDIA Creative Europe; it is the first digital platforms to offer a flat-rate service in Spain. Filmin is currently also available in Mexico through FilminLatino, a platform created in collaboration with IMCINE.