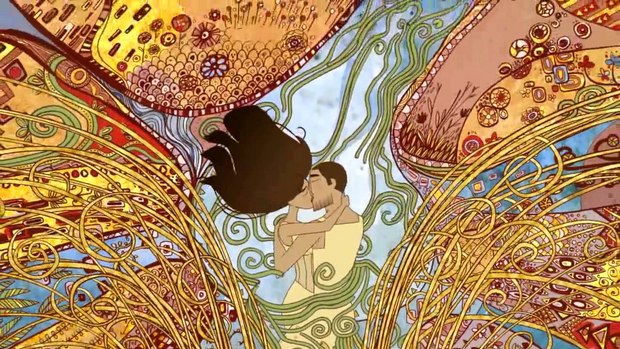 KLIK! Amsterdam Animation Festival takes over EYE for six days of animation madness from October 27 through November 1, 2015. KLIK! will host a dazzling showcase of the world’s best animated shorts and features, fine workshops and parties, and inspiring presentations by animation greats.

Festival organizers have announced that Irish illustrator, comics artist and filmmaker Tomm Moore will give a presentation on his work at animation studio and production company Cartoon Saloon, and speak about his segment “On Love” for Kahlil Gibran’s The Prophet. This long-awaited feature animation is produced by actress Salma Hayek and is a rendition of one of the best-selling books of all time. The film had its U.S. release in August and continues to open in more U.S. cities, and is receiving much critical acclaim. Tomm Moore’s first two feature films, The Secret of Kells (2009) and Song of the Sea (2014), were both nominated for the Academy Award for Best Animated Feature.

Also on deck is Johnny Kelly, an internationally-acclaimed director and designer from Ireland. He will give an inside look of his work at Nexus Productions, where he works on interesting projects and commissions for Adobe, Vitra, Google, and the Victoria and Albert Museum. His short film Procrastination (2007) was broadcast by the BBC, and won the Jerwood Moving Image Award. The stop-motion animation he directed for Chipotle, Back to the Start (2011) won the Film Grand Prix at the Cannes Lions International Festival of Creativity. In the Netherlands he is best known for directing the title sequence of the long-running Dutch educational TV show Het Klokhuis.

Stop-motion master PES will present a mix of his personal films and commercial projects. He will talk about his sources of inspiration, his creative process, and how he selects the materials for his work. He will also show some unique behind-the-scenes material. PES is best known as the creator of Fresh Guacamole (2012), the shortest film ever nominated for an Academy Award. For his films he has made chairs have sex, turned bubble wrap into boiling water, and turned rusty tools into deep sea creatures. He is currently developing Garbage Pail Kids for the screen.

“At its best, animation is a kind of poetry painstakingly constructed from sounds and images; these short films contain the most powerful truths and ideas, equally capable of hilarity and seriousness—often in the same film,” said KLIK! creative director Yvonne van Ulden. “There’s a whole wonderful world to discover; there are as many different animation styles and stories as there are different animators!”

In a special collaboration with EYE, KLIK! presents EYE on Art: Johan Rijpma. Versatile artist Johan Rijpma will share the thought and work process behind his eclectic work, as well as his sources of inspiration. His films, animations, music videos and other artworks are often the result of his fascination and exploration of the creative design process and the element of unpredictability.

These special guests’ extraordinary work, and innovative techniques and use of materials embody this year’s artisanal theme program, Rock, Paper, Scissors. Taking a trip down memory lane to simpler times with honest and uncomplicated materials, KLIK! showcases the beauty of technical imperfections. The Do It Yourself (DIY) movement has been on a powerful rise as a response to the digital revolution and a growing dependence on machines. Like in the late 19th-century Arts and Crafts movement, artists reject mass production and turn to craftsmanship. Unique handmade objects and analogue techniques are now in renewed interest. So easily attained through technological means, technical perfection loses value and people rediscover the pleasures and value of true craftsmanship as reflected in the popularity of websites like Etsy.

This movement is also reflected in the realm of animation. For over a century filmmakers have strived for photorealism, which has been realized through computer animation in films like Avatar and Life of Pi. Stop-motion animation however is on a rise, both with professional and amateur filmmakers. They are bold and brave to show materials in their full form and not to hide technical imperfections. Everyday materials and props such as rope, wool, bubble wrap, bricks, ground coffee, and puppets are taking center stage. Even in computer animation, that is frequently used to mimic these materials. Showing the production process of these works in behind-the-scenes footage is also an inherent part of the DIY movement.

KLIK! Amsterdam Animation Festival is an annual celebration of all things animated. KLIK! likes to showcase animation in all of its shapes and sizes, giving a platform to animated feature films, shorts, commercials, video games and installations. KLIK! will celebrate its 8th festival edition October 27 through November 1, 2015 at EYE in Amsterdam. This year’s international competition received over 1,800 entries from 80 countries.