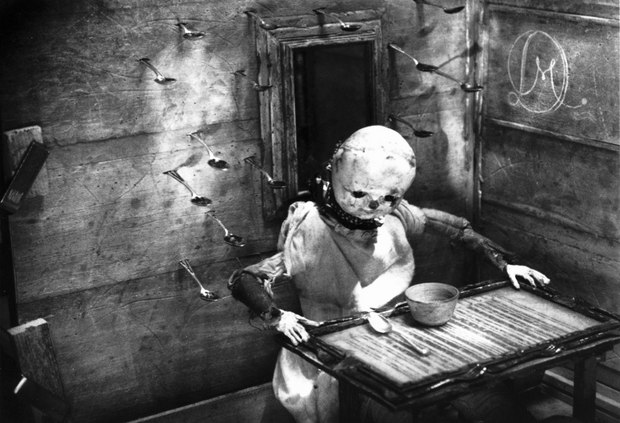 Since its start in 2009, the Bristol Festival of Puppetry has explored the relationship between puppetry on stage animation and puppetry. Now in its fourth edition, the biennial Festival has expanded over the years to include film screenings handpicked by Aardman’s Peter Lord and the first joint exhibition of work by Aardman and stop-motion pioneer Ray Harryhausen.

The relationship between animation and live-action is perhaps no surprise for a festival based in a city with a thriving live puppetry scene and a reputation for world-class animation. For 2015, Bristol Festival of Puppetry is presenting an expanded film program that showcases work featuring both world-renowned filmmakers such as The Quay Brothers and Barry Purves along with the very best of the talent from the emerging generation.

This year’s festival and the film program kicks off with The Quay Brothers Retrospective and In Conversation at Watershed at 6pm on Thursday, August 27. The work of The Quay Brothers is among the most unique and influential of stop-motion filmmakers in recent times. The Quays’ body of work includes commercial production, such as advertising and music videos. However, they are best known for their portfolio of independent artwork, including feature-length films, stop motion animated shorts, installations and theatrical design.

Influenced by the European avant-garde and drawing inspiration from literature and visual arts, their dream-like and abstract film-work features worlds that are more suggestive of highly stylised theatrical spaces than natural environments. With little or no dialogue in many of their films, greater emphasis is placed on sound and motion, with music as a root for both the piece and the process. As music guides artists and, later, audiences through the film so, the motion of the puppet speaks in the absence of sustained dialogue.

As well as the screening and in conversation event, The Quay Brothers have created a unique installation for the Redcliffe Bascule Bridge Control Room. Passers-by will have the opportunity to peer through the windows of this disused room, once a critical space in Bristol’s commercial shipping heyday, and discover a landscape upturned in a moment of convulsion.

Barry Purves is a veteran stop-motion animator and celebrated filmmaker and 2015 marks his 36th year in the world of puppet animation. The Bristol Festival of Puppetry will be hosting Barry Purves Retrospective and In Conversation at Watershed at 6pm on Saturday, August 29.

A key thematic that identifies much of Purves’s work is the theatrical treatment of his films. Like the Quay Brothers, Purves’s portfolio includes commercials, television (Wind in The Willows, Hamilton Mattress) and films (King Kong). However, it is his independent filmmaking that provides the greatest insight into the artist. In addition to the root subject matter often deriving from classical or long-established narratives -- Greek tragedy (Achilles), Japanese folk story (Screen Play) -- his directorial style is faithful to a theatrical aesthetic. This aesthetic allows his audiences to delight in a sense of the real world in miniature. Sets, costumes and theatrical devices are authentically reproduced with an exacting detail. This adherence to realism extends into the movement of the puppets. As an animator, Purves lends weight and plausibility to his characters via their naturalistic movement. Adult themes of lust, violence and violation take on startling gravity by consequence, as Purves flirts with our suspension of disbelief in a uniquely disquieting manner.

Barry Purves will also lead a masterclass in directing puppetry on film and animation on Sunday, August 30 at Watershed.

Curated film and theatre director by Joseph Wallace, The BFP film program is rich not only in the reputation of filmmakers represented but also the scope and ingenuity of puppetry on film and animation. For this year’s festival Wallace has put together two very special screenings that reflect his personal choices of films that showcase the unique storytelling qualities of puppetry and animation.

What is puppetry on screen and which artists are placing the puppet at the heart of their films?

Both programs explore a multitude of cinematic approaches to puppet-led storytelling through both stop-motion and live action puppetry. Contemporary filmmakers demonstrate puppets and animation are forms that allow for complex and nuanced storytelling on subjects that range from the light-hearted and comedic to the mysterious and emotional.

The two final screenings for adult audiences at Watershed are:

This program from Ibex Puppetry is hand-picked by Heather Henson, Creative Director, at Ibex Puppetry, Director of Orlando Puppet Festival and daughter of Muppets creator Jim Henson. It features the work of independent artists exploring the craft and storytelling of live-action puppetry on film. These are films by artists who have built their vision and breathed life into their dreams.

This heart-warming documentary chronicles the life of Caroll Spinney, the man who has been Sesame Street's Big Bird and Oscar the Grouch since 1969. Combining compelling interviews and fascinating material from Caroll’s personal archives, I Am Big Bird is a dynamic portrait of a man whose characters have influenced generations of children. A film not to be missed by any puppetry enthusiast!

New Visions is the Bristol Festival of Puppetry platform for emerging talent from the U.K. The five programs, co-curated with Show Me the Animation, showcase the best student puppetry from schools including the National Film and Television School and the Royal College of Art and University of the West of England. The New Visions film program will run 7pm every evening from August 28 through September 5 at the Bristol Festival of Puppetry’s special pop-up cinema at Tobacco Factory Theatres. See below for full listings.

The film program follows the ethos of Bristol Festival of Puppetry in providing something for everyone. Screenings for families and children include:

Ivor Wood was a pioneer of stop-motion animation and an unsung hero of British children’s television. The Anglo-French animator created many iconic programs including The Herbs, The Wombles, Paddington and Postman Pat. This program is a rare opportunity to look back at Wood’s charming and richly crafted work on the big screen.

This is a colorful selection of European films, old and new, with enchanting stories and magical characters. Featuring films from France to Hungary the selection showcases the universal appeal of puppetry across borders and age.

Alongside the Bristol Festival of Puppetry film events, there is a program of workshops in animation for all ages and skill levels, Punch & Judy at Watershed Cafe/Bar from Robert Styles, and two very special performances from The Paper Cinema, which is reviving three of its early works especially for this year’s festival. Founded by Nicholas Rawling, with Imogen Charleston and Christopher Reed, The Paper Cinema has a worldwide reputation for its bespoke performances with a unique blend of live animation and music.

To get everyone in the mood for two weeks’ celebration of all things animated on stage and screen, the BFP Opening Party -- to be held on Thursday, August 27 starting at 9.30pm -- will feature puppetry from Green Ginger’s Lionel the Vinyl – Groove Grocer, pop-up micro animation The Hickboo by Sophie Cheshire, and music with DJ Natasha Wolf.

DIY Puppetry @ Watershed
Workshops for the curious minded. No previous experience necessary
10am-5pm 31 August Stop Motion on a Shoestring with Mary Murphy
£40 / £25 conc
Want to build a stop-motion puppet and film it in action? Using affordable materials, this practical workshop will guide you through the process step by step.

Please note due to unforeseen circumstances, Punch & Judy will now be performed by Robert Styles.