2015 Academy Awards: Backstage at the Oscars 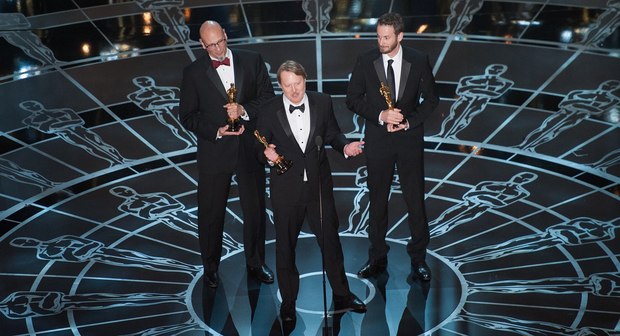 Big Hero 6, Feast and Interstellar were the big winners for animation and VFX at Sunday night's 87th Academy Awards. Here's a snapshot of the backstage comments:

Imagine the “Big” celebration happening at Disney Animation today as the studio adds two more Academy Awards to its trophy room -- one for Best Animation Feature for Big Hero 6 and another for Best Animated Short Film for Feast, an adorable 3D hard-drawn and computer-animated romantic comedy. While gripping their new golden statues, Big Hero 6 directors Don Hall and Chris Williams say they’re thrilled, but mostly relieved winning Best Animation feature award on Sunday. The win marks the 2nd consecutive year Disney has taken home the Oscar in this category and the studio had huge success with Frozen last year. A little intimidating you say? Rightfully so, and finally the filmmakers are willing to talk about it.

“Can we finally say that we DID feel pressure? Because we've been saying that we didn't,” confessed Hall to a standing-room-only room of journalists backstage at the Oscars. “We were all thrilled by the success of Frozen because it's a little hard for everybody to understand, but we all kind of work on each other's films. Chris (Williams) actually storyboarded on Frozen and did the voice of Oaken, and we all contributed just like Chris (Buck) and Jen (Lee), the directors of that movie, contributed on this movie, giving us notes and stuff like that. So we all have ownership over everybody's films.”

Big Hero 6 producer Roy Conli adds, “It is such a team at Disney Animation right now. It's an amazing team that works together on every project. So I looked at it (Frozen) as just an inspiration.”

The very candid Hall also says Big Hero 6 was the “most challenging film” in his 20-year history at the studio because it was the first superhero Marvel movie at Disney coupled with a heartfelt story about grief between a boy and his robot -- two very distinct genres.

“Our biggest challenge was always, it's always story,” says Hall with his Oscar in tow. “Whenever you're making any kind of film, the story is really the ultimate thing that you're trying to tackle. And for this one we had this amazing story about grief, about loss, about a 14‑year‑old who loses his brother and a robot who becomes essentially his healer, and trying to reconcile that with a superhero origin story was very difficult and it took the bulk of our time as directors. We worked at it and we worked at it and we worked at it until we finally found that Baymax himself, the character Baymax, was the link that linked those two stories together. But in our 20‑year history at Disney I think this was our most challenging film. But it makes it all the sweeter when this kind of stuff happens.” It’s an Oscar Feast for director Patrick Osborne as he walks away with the Academy Award for Best Animated Short Film. Osborne, who prior to working on Feast was the co-head of animation on Big Hero 6, shares his excitement about being a part of Disney shorts history and about the studio going back to its roots making more shorts and animation films.

“Disney's short history is just massive and there's so many good ones,” says Osborne. “So it's an incredibly scary and daunting thing ‑‑ you don't want to be the bad one, but it's an honor to be able to make something in the studio with so many talented people where you can play something amongst those shorts that will exist in Disney's history forever.”

Osborne prepared for making Feast by taking one-second videos of every dinner he ate in 2012, an idea that was eventually incorporated into the film.

“There's a video of all my dinners in 2012. I think there's a version of it that's a little bit short that's out there right now floating around the Internet somewhere, but maybe I'll put out the rest because you can tell if you watch all your meals in an entire year, and you can see where your dieting is not working and why you're gaining weight.”

“And everything else happening in your life,” adds Feast producer Kristine Reed, who also produced last year’s Oscar-winning short, Paperman. “It's amazing how vivid it is through your meals.” Paul Franklin and Scott Fisher backstage with the Oscar for achievement in visual effects for ‘Interstellar.’ Image: Richard Harbaugh / © A.M.P.A.S.

On stage, Lockley thanked director Christopher Nolan for “taking us on an amazing voyage across space and time,” and he gave a special shout out to CalTech astrophysicist Kip Thorne, who served as executive producer and consultant on the film, calling him “one of the smartest people on Earth.” With Thorne’s lead, the VFX team created a more realistic looks to the space odyssey and did something that had never been done before in any Hollywood film.

Backstage, the team talked about keeping it real especially when working with a director like Nolan who loves and wants his effects to be practical. The film contained more than 850 visual effects.

“Well, it's more than just using everything that's in the visual effects box of tricks and special effects and miniatures and all that,” Franklin says. “It's working in unison with the rest of the film, being part of the creative process right from the very beginning all the way through production right to the very end. And I think that's what got us where we are. Some things you can't obviously go and shoot for real, you can't go and film a real black hole. But what we were able to do is we were able to bring that visual reality onto the set. We used live in‑camera projection. Whenever you're looking out of a spacecraft window, you're seeing what the actors actually saw on the set. So we weren't using green screen, we were doing it live. And our sets were more like simulators than regular sets, and so that level of photographic reality informed everything that we did.”

The Interstellar VFX team created an entirely new rendering software called DnGR to help create the most high-resolution image of a black hole in motion ever seen, either on the big screen or by the academic community, prompting them to publish a paper detailing their findings in the scientific journal Classical and Quantum Gravity.

So what do science and the arts have the most in common?

“I think what they really have in common is creativity,” Franklin says. “The scientists, great scientists, all scientists are creative people. They're trying to explore the universe in the same way the artists are, they're just taking a different approach to it. And the great thing with visual effects and special effects is it brings all that together, it brings together physics and math and engineering with creative arts. My background is fine arts. The people I work with have degrees in advanced level physics, and of course, Kip Thorne is a great astrophysicist. We all speak the same language, that's the amazing thing that we find when we do these sorts of thing.”