Tenth annual showcase event from the Toronto Animated Image Society to include the results of the 2016 Anijam competition, a new work in VR by artist Michael Enzbrunner, and more. 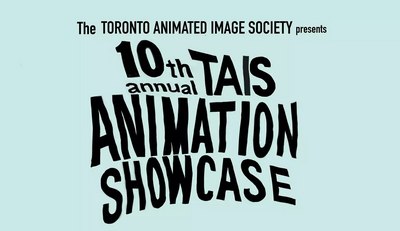 TORONTO, ON -- The Toronto Animated Image Society (TAIS) will present the 10th annual TAIS Animation Showcase at Geary Lane - 360 Geary Avenue - in Toronto on Saturday, July 30th at 7:00pm.  23 short animated films will be featured, all created within the last 12-24 months, and selected from over 1000 eligible entries. The finalists in this year’s program cover a variety of genres and stylistic approaches to the animation art form. Many of the films combine humor, whimsy, and the surreal with stories that address compelling social, philosophical, and political themes. Others push the boundaries of experimentation, producing aesthetic explorations with dazzling impact. This program is for mature audiences only.

Awards will be given to four films, as selected by the audience and a guest jury of Canadian animation media artists. The awards include a “Grand Prize - Best of the Showcase” award. Filmmakers in this program are from 11 different countries including Canada, USA, Croatia, the Russian Federation, the UK, Argentina, Israel, Belgium, Spain, Singapore, and Germany.

Highlights of the program include: Carla Veldman’s film Uncle Antlers, a hand-drawn animation about one child’s imaginary friend; Daniel Suljic’s Transparency (Stakleni čovjek) portraying a world of surveillance in relation to the frivolity of social media obsession; Eliott Deshusses’ exquisite stop-motion tale PIPO in which a child is accidentally raised by TV; Jonni Phillips’ hilarious surrealist analog narrative The Earth is Flat that follows a little pink character through a pastel wasteland of pop culture dreams; Jamie Wolfe’s sticky Roommates in the crush of a heat wave hot enough to melt their minds; and, Amanda Strong and Bracken Hanuse Corlett‘s Mia' which tells the tale of a young Indigenous female artist for whom the city streets provide both sanctuary and a secret gallery, where her art comes to life.

Also featured is TAIS’ Anjiam competition. With a theme of Disaster! The 10-second animated shorts were created by animators who have been given no guidelines beyond the theme and time cap. TAIS 2015-16 Artist in Residence, Michael Enzbrunner, will present a new work in VR (virtual reality) entitled Death Van & the Zeitshow Folks, produced in collaboration with Helge Henning. This VR experience puts participants in the middle of a dreamlike surrealist musical diorama where the viewer is shrunk down to thumbnail size. Created as part of TAIS 2015-16 Artist in Residency program, sponsored by The Petman Foundation.

The Animation Showcase is produced by the Toronto Animated Image Society, an artist-run, non-profit charitable organization dedicated to exploring and promoting the art of animation through production, screenings, workshops and exhibitions, and offering affordable access to space and equipment for artists who make animated films within contemporary art practices. 2016 marks the 10th year of this exciting event.