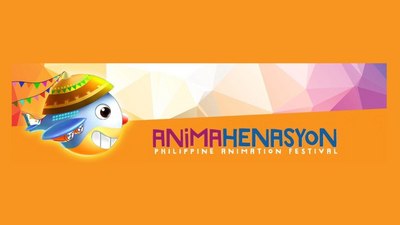 MANILA -- The Philippines will be celebrating the 10th year of their animation festival called ANIMAHENASYON: Inspiration. Creation. Animation., November 22-24, 2016 at the Samsung Hall, SM Aura in Bonifacio Global City, Metro Manila. A combination of the words animation and imagination, Animahenasyon aims to encourage the production of original content in the country and to recognize Filipino talent in the field of animation. The festival also promotes local and international animation excellence as well as the competitiveness of the Philippines animation industry.

Organized by the Animation Council of the Philippines, Inc. (ACPI), the festival will be composed of different activities including plenary sessions, workshops, a cosplay event, and exhibition. On November 26, special film screenings featuring Spanish animation and previous Animahenasyon entries will be held in De La Salle, College of Saint Benilde (DLS-CSB).

“We envision the 10th anniversary of Animahenasyon to be the largest event of its kind in the country. It is our way to celebrate our animators, and at the same time, our way to create a venue for learning for our students and professionals. Promoting original content creation is also one of the major goals of this yearly gathering,” remarked Juan Miguel del Rosario, ACPI president.

In partnership with the embassy of Spain in Manila and the Instituto Cervantes de Manila, ACPI will co-organize a program called Bridging the Gap (BTG) in conjunction with Animahenasyon 2016. First held in Spain in July 2015, BTG is an intensive workshop where talented young students have the chance to meet and create synergies with influential professionals and decision-makers working in the field of animation.

According to Guillermo Escribano, first secretary for cultural affairs of the Spanish Embassy, the Philippines will be the first ever co-organizer of BTG in Asia. He added that with the country’s affinity with the Spanish culture and arts, they consider the Philippines as a strategic point to reach other Asian countries in the future.

To encourage the production of original Filipino content, the festival also holds an annual animation competition. Participants from all over the Philippines, including the provinces of Bicol, Zamboanga, and Davao, send in their entries to Animahenasyon. A total of 11 awards will be given to winners on the festival’s culminating activity. Interested parties may send their entries until October 7.

This year, Universal Robina Corporation (URC) is also hosting a competition as part of the festival. Winners of URC’s competition will have the opportunity to produce an animated TV commercial for one their kiddie brands, Chooey.

Film screenings are scheduled on November 26 in DLS-CSB.  The animated film titled From the Doodles to Pixels: Over a Hundred Years of Spanish Animation, will be the highlight of the scheduled screenings. The film was recently presented in the Museum of Modern Art (MOMA) in New York Previous. Entries to the competition will also be screened.

“Animahenasyon is our biggest annual event, but we continue to implement projects that would further improve the capabilities of our talent pool in animation. We also build strategic partnerships with international organizations to help us further advance our brand as a world-class producer and provider of animation content and services, respectively.” added del Rosario.

The Philippine animation industry generates around US$153 Million, with around 11,000 full time employees (FTEs). This number is projected to grow in the coming years.