What happens when you mess around with time and space? The dysfunctional superhero family returns home and finds out… the Sparrow Has Landed and things aren’t exactly how they left them; all new episodes stream June 22. 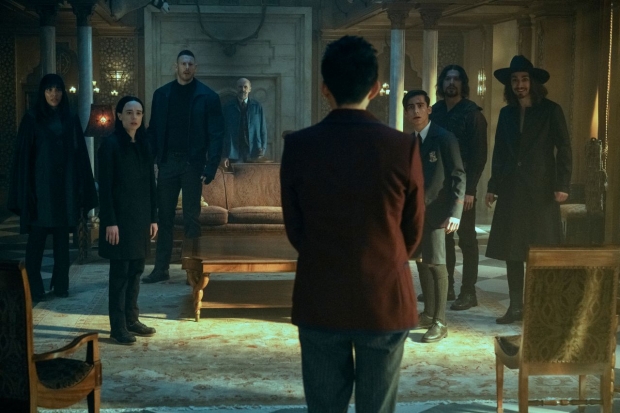 Okay, let me get this straight…. our superheroes haven’t seen any sci fi movies, read any classic time travel books… haven’t they heard of the butterfly effect!? What did they think would happen when they repeatedly tried to make things right by messing with the past? But off they went to put a stop to 1963’s doomsday!

Don’t get me wrong – I truly can’t wait. If I could time travel, my absolute first stop would land me in front of my TV on June 22, to eagerly greet the Season 2 debut of Netflix’s The Umbrella Academy. But alas, I can’t - so I stand in unison with all other bereft Umbrella Academy fans and gape at the streamer’s offerings. This time we have a slew of really awesome first look images (see below) that do offer a somewhat thrilling peek into the future of our favorite dysfunctional superhero family.

In Season 3, after putting a stop to 1963’s doomsday, the Umbrella Academy return home to the present, convinced they prevented the initial apocalypse and fixed this godforsaken timeline once and for all. But after a brief moment of celebration, they realize things aren’t exactly (okay, not at all) how they left them. Enter the Sparrow Academy. Smart, stylish, and about as warm as a sea of icebergs, the Sparrows immediately clash with the Umbrellas in a violent face-off that turns out to be the least of everyone’s concerns. Navigating challenges, losses, and surprises of their own – and dealing with an unidentified destructive entity wreaking havoc in the Universe (something they may have caused) — now all they need to do is convince Dad’s new and possibly better family to help them put right what their arrival made wrong. Will they find a way back to their pre-apocalyptic lives? Or is this new world about to reveal more than just a hiccup in the timeline?

The show is produced by UCP, a division of Universal Studio Group, for Netflix.