A Monster in Paris

A Monster in Paris

A Monster in Paris is out in France.

Story line (IMDB):
Paris,1910. Emile, a shy movie projectionist, and Raoul, a colorful inventor, find themselves embarked on the hunt for a monster terrorizing citizens. They join forces with Lucille, the big-hearted star of the Bird of Paradise cabaret, an eccentric scientist and his irascible monkey to save the monster, who turns out to be an oversized but harmless flea, from the city's ruthlessly ambitious police chief.

History of the production:
Bibo Bergeron started working on the project, "A Monster in Paris(Un Monstre Ã  Paris)[UMAP]" in 1993. He creates Bibo Film, but he does not start the project right away. In the mean time his company makes commercials and television series, and in 1997 he starts working at Dreamworks Animation.
While in the US he develops the idea that he would like to create a big budget film of his own, but with the distinct characteristics of a "Film d'auteur".
In 2005 Bibo Bergeron returns to France and starts to work for real on " A Monster in Paris".
At the time, a budget of 28Mâ‚¬ (~40M$US) was big for an animated feature produced in Europe.
Work finally started in 2007, but the production had to stop because of financial issues, in 2008.
The work restarted in 2009 and was finally finished ultimo 2010.
All the rigging and animation was done in a studio created specifically for the production. Bibo film created this studio in Montreuil in Paris, and it housed 140 persons during the production.
Also see Animation Magazine (http://www.animationmagazine.net/features/a-fin-de-siecle-fantasy-a-monster-in-paris/) 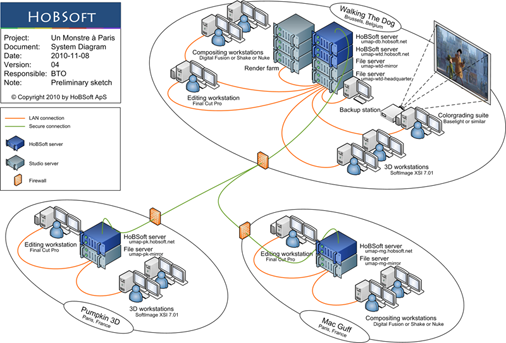 Scenes would arrive automatically from Bibo Film to Walking the Dog along with a Harlequin texture render. 7 technical passes were rendered independently of lighting, and later used during the rest of the lighting process/render. Upon approval, relevant rendered passes would be automatically transported to Mac Guff Ligne (Now Illumination Mac Guff) and relevant automatic reports were created to help the staff.

Software:
Animation was done in XSI 7.01. EDAM was used for production management in Bibo Film.
HoBSoft production system was used when the production became multi studio.
Nuke was used for Lighting and Rendering with Backburner as render queue.
Mac Guff uses propriety in house software for the Stereo Compositing.

- No waste. With a limited budget the approach to the story had to be different from the productions of "A Sharks Tale" and "The Road to El Dorado". Despite the limited budget he was able to keep a good grip on the production. This allowed him to keep all scenes from the very well prepared storyboard in the film.
In the american productions, he admits to having had to do painful choices when deciding what scenes to cut from the final edit.

- The idea of producing the film in CGI came about half way through the production. The development of the necessary techniques took ~3 months. The film does not distract the audience because of the CGI, but has a look and feel that is cosy and warm... Just like Bibo wanted it to be.

Here are storyboard pictures from aantin 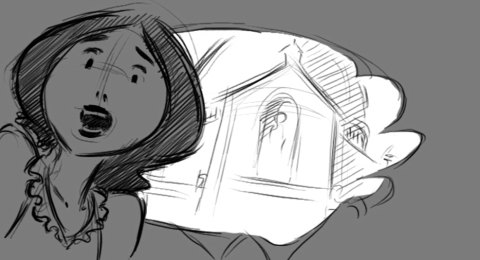 The Novel is out, but only in french though...

It is really cool looking. I scrolled your pictures with my mouse and it looked almost like an animatic.
Best of luck to you.