anyone read this new book yet, very curious myself....

Haven't read it yet. But there's been a lot of hooplah on the news because it paints Schultz as depressed and sceptical. Well.....that was pretty obvious if you read his strip.

I read a biography of Schulz once and it's a pretty mundane story.
He was in the army and then drew cartoons for 50 years.
If you are a huge Peanuts fan, then you might enjoy it.

I read a biography of Schulz once and it's a pretty mundane story.

i think that's where this new book difers. It touches on topics and aspects of his life that are a bit more telling. Below is from ENTERTAINMENT WEEKLY's review of the book:

Michaelis was given unprecedented access to Schulz's family and correspondence (access some of the Schulz clan now regrets, from recent public statements). He sketches a more vivid Schulz: a fierce competitor who, when Jim Davis' Garfield approached Peanuts-level popularity in the '80s, said the cat was ''the ugliest, most insulting, and vicious'' character he'd ever seen; an unhappy husband who divorced his first wife, Joyce, after 22 years of lukewarm partnership; a father of five who claimed in the late '70s, ''I'm not a children lover.'' As Michaelis demonstrates, Peanuts was born primarily out of Schulz's love of sketching and thinking up gags. One of the rare ways to bring out his growl was to offer a Peanuts suggestion. ''I don't take ideas for the strip,'' he said icily.
The biographer reproduces Peanuts comics throughout the text whenever he thinks they illustrate some mood Schulz was in during their creation; the device is fitfully illuminating. But seeing the strips will remind readers that if the art was minimalist, the emotions expressed in the word balloons were complex.
Younger readers, inundated since birth with Peanuts greeting cards and TV reruns of A Charlie Brown Christmas, may not realize the ways in which the strip was a crucial step forward in the evolution of comics, helping to shape the look and tone of strips including Garry Trudeau's Doonesbury. Ultimately, Michaelis' book is as calm and modest as his subject. But Schulz and Peanuts is also as meticulous in its evocation of a sensitive soul's temperament as any first-rate cartoon by Sparky himself.

"Schulz's fixation on his work was total, and his private life suffered as a result. Mr. Michaelis uncovers quite a bit of Schulz's more personal tribulations. Schulz's strong-willed and industrious first wife, Joyce, grew disgusted with his withdrawal, and she often treated him cruelly. As the marriage finally unraveled, Schulz had an unsuccessful affair, and he later broke up the marriage of the woman who became his second wife. Schulz's life turned more peaceful after he remarried, but he never overcame the self-doubt and dread that plagued him. Work remained his only refuge. At the end, deteriorating health took away Schulz's ability to draw the strip, a loss so crushing that it can only be considered merciful that he died, at age 77 in 2000, the very day his last strip was published."

hey, thanks for posting that link to the Watterson review. its not my favorite review ever, but "Calvin & Hobbes" has been one of my biggest influences and i haven't seen anything from Watterson in quite some time.

monte schulz speaks out against the book on Cartoon Brew.

Tonight on PBS there are two peanuts docs on - one about Charles Schulz on AMERICAN MASTERS (9:00 pm est) and the one about the Peants strip (10:30 est) - thats Savannah time. According to nexts month's Preview magazine the shows will be repeated in early November.

All I can say about Schulz is that I wrote him when I was a sophmore in high school and he wrote me back...and gave me encouragement. When I was at Disney in 1996, I called him to let him know I was was there...he was happy about my progress.

Growing up I was, as I guess can be expected, a Garfield person. Later on the strips' rather unsubtle humour turned me away from the series. Now that I know how completely calculated Garfield was from the very beginning to achieve little more than sell mountains of merchandise I even eye it with some suspicion. Gotta admire it from a strictly commercial point of view but that's all.
Even before I neared my twenties and developed the maturity to get a better grasp on what Peanuts was about, the strip appealed to me due to its atmosphere and that hidden promise of wisdom which back then I couldn't fully appreciate. Even at age thirteen I didn't like coloured Peanuts strips. In its black and white "crudeness" it transported a feeling of a warm simplicity in which I could lose myself, a kind of realism bordering on the bleak but never, and this is important, depressing me.

Not everyone can say they recieved a letter from him!

I remember his early TV Specials...and they were a big deal!

I recently purchased a small art print of Snoopy all decked-out on his Sopwith Camel...it makes me smile!

I watched the American Masters episode that acts as a companion piece to the book, it was very well done. I recommend you dvr it if it airs again.

Calvin and Hobbes is the greatest comic strip of all time. Hands down. And yes, Garfield does suck. Oh. How Garfield sucks. I'm glad Shulz publicly insulted the strip. :)

But anyway, that biography sounds interesting, I might want to read it sometime.

C&H's my favorite as well!

I have a bunch of the books, and man, that line art and his watercolors were fabulous! I loved Sunday!

you have to admire him for walking away ---
but i do miss him and them ... 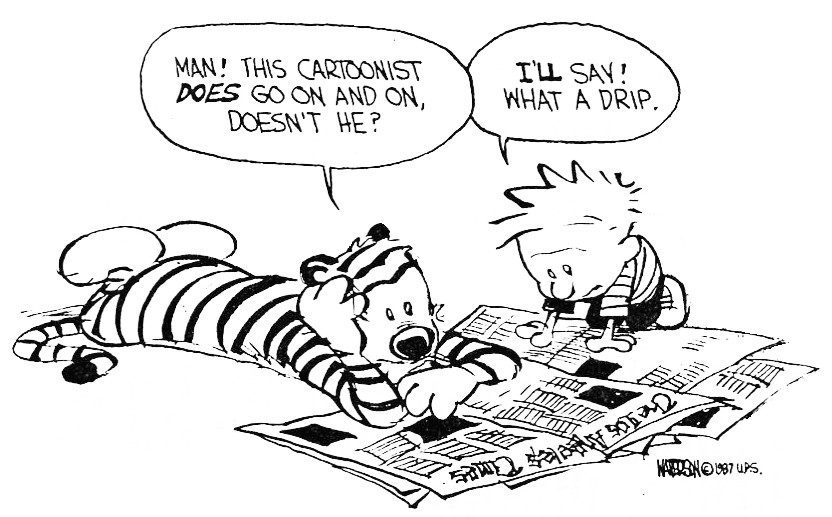 I watched that American Masters episode and - again - it's a pretty mundane story. I can't imagine reading 672 pages of that, except maybe as a sleep-aid.

I'm not singling out "Sparky." The life stories of illustrators are rarely interesting.