Winter Film Awards showcases the best in indie films from emerging filmmakers from around the world in all genres, with a special emphasis on highlighting the work of women and under-represented filmmakers. 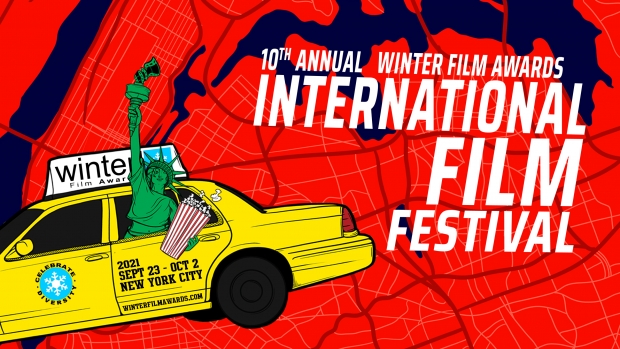 Winter Film Awards International Film Festival, which was one of NYC’s last live events of 2020, is returning bigger than ever for 2021 in celebration of its 10th year. The Festival’s lineup includes 91 outstanding films, a diverse mixture of 13 Animated films, 15 Documentaries, 6 Feature narratives, 16 Horror films, 10 Music Videos, 22 Narrative shorts and 5 Web series. These include 18 student films and 19 first-time filmmakers. Filmmakers come from 28 countries; half of the films were created by women, 53% were created by or about people of color.

SCREENINGS – September 24-30 at Cinema Village, 22 East 12th Street. Screening blocks are 1 ½ – 2 ½ hours long and include a mix of shorts and feature-length films. All screening blocks include a 20 minute Q&A Session with the filmmakers.

EDUCATION SESSIONS – Evening sessions September 27-30 from 7-8:15PM at Cinema Village, 22 East 12th Street and all day October 1. Sessions cover topics of interest to emerging filmmakers and are free and open to all. Sessions include workshops on Legal Issues for filmmakers, Producing 101, Set Design, Location Scouting and more!

Winter Film Awards is an all-volunteer, minority and women-owned registered 501(c)3 non-profit organization founded in 2011 in New York City by a group of filmmakers and enthusiasts. This program is funded, in part, by a grant from the NYC & Company Foundation and by public funds from the New York City Department of Cultural Affairs in partnership with the City Council.