London Feminist Film Festival presents a one-off afternoon of feminist animation films by the amazing Leeds Animation Workshop, to celebrate their 40th birthday We'll be showing a selection of their best feminist shorts from the last four decades, followed by a Q&A, and we'll also have an exhibition of their artwork and archive material. 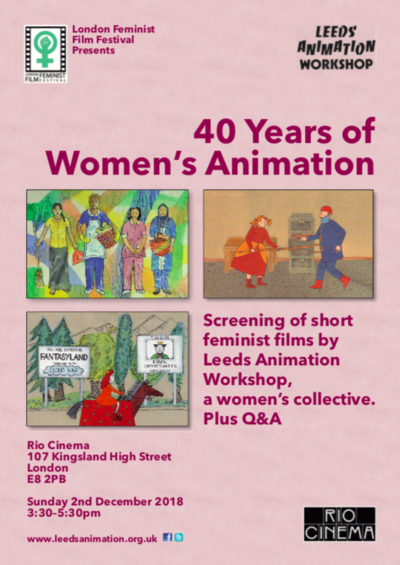 The screening will take about 75 minutes and will be followed by a Q&A with the women behind the Leeds Animation Workshop.

Give Us a Smile (13 mins / 1983)
Shows the effect of the harassment women live with every day, ranging from 'street humour' and media stereotyping to actual physical violence. The film’s criticism of the mass media, sexual harassment, and the objectification of women, as well as the solutions it suggests, are as relevant and thought-provoking today as when the film was released 35 years ago.

Through the Glass Ceiling (17 mins / 1994)
Fairytale-based animation about equal opportunities for women, firmly set in the real world of gender stereotyping, sexual harassment, and discrimination. Narrated by Alan Bennett.

No Offence (12 mins / 1996)
A modern-day fairy-story about sexist, racist, and homophobic harassment at work. A sequel to Through the Glass Ceiling. Highly relevant in the era of #MeToo.

Out to Lunch (12 mins / 1989)
Set in a cafe, this film brings together themes of language and space to show how women's lives are constrained by male expectations. It explores such diverse topics as the slimming industry, building design, and images in the media to show how women's style is cramped and her space limited.

Did I Say Hairdressing? I Meant Astrophysics (14 mins / 1998)
A modernised fairytale animation, investigating why women are under-represented in Science, Technology, Engineering and Maths (STEM). The film uses humour to counter the subtle and not-so-subtle gender typecasting that often prevails, from babyhood right up to professional level.

They Call Us Maids: The Domestic Workers’ Story (7 mins / 2015)
Made in partnership with Justice 4 Domestic Workers, the film is based on real life stories of migrant domestic workers, using vivid watercolour animation to reveal some disturbing truths about modern slavery.