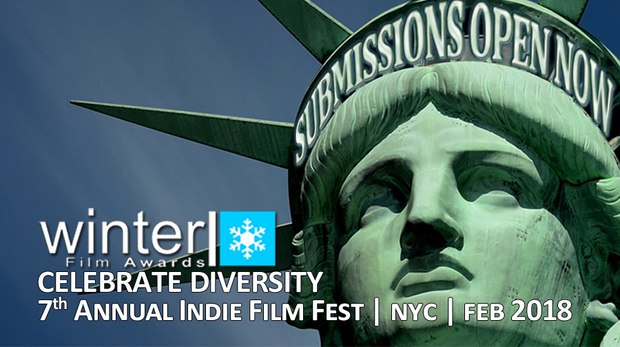 Winter Film Awards Independent Film Festival announces a Call for Entries for its 7th Annual celebration of independent film, to be held February 22 – March 3, 2018 in New York City. Filmmakers from around the world will travel to NYC to attend the Festival’s full week of film screenings and industry networking after-parties, which will conclude with a glittering awards ceremony to be held on March 3, 2018.

The rapidly growing Festival – which was recently voted one of the Top 10 Best Reviewed Festivals on FilmFreeway – seeks a diverse collection of creative indie films from NYC and worldwide in all genres – ranging from narrative features to short films, from documentaries to animation, and from music videos to web series and horror films.

Outstanding work will be awarded for each category, along with Best Director, Best Actor/Actress, Best Original Score, Best Student Film and the NY Perspectives Award for best depiction of the New York multi-cultural experience. For the 2017 Festival, 88 films from 30 countries were selected for screening, including 42% made by women, 45% made by people of color and 33 first-time directors. Works of all genres, forms, and lengths are considered for Festival screening.

WINTER FILM AWARDS IS NEW YORK CITY.  Like the city itself, we showcase the eclectic diversity and excitement of the independent arts world. We are an all volunteer, minority- and women-owned registered 501(c)3 non-profit organization.