Anim’Est Announces a Call for Entries

The deadline for submissions to the 12th edition of the festival is June 20, 2017. 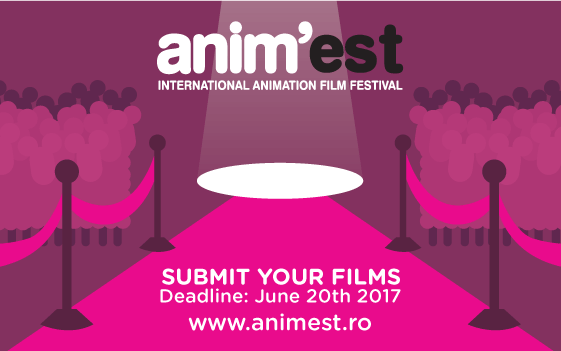 The 12th edition of Anim’est International Film Festival taking place October 6-15 in Bucharest, Romania will be a dynamic, audience and professional oriented event, encouraging dialogue and cooperation in the field of animated filmmaking.

The international film festival, established in 2006, has become Bucharest’s most loved film festival and a recognized event on the international animation scene. The presentations, workshops, master-classes and round tables provide the perfect opportunity to get in touch with the latest creations and make contacts. Among the great names that have visited Anim’est include Bill Plympton, Georges Schwitzgebel, Juan Pablo Zaramella, John Dilworth, and Mike Reiss.

Short or feature animated films produced after January 1, 2016 can be submitted in six categories:

The winners receive trophies, prize money and/or animation software, while the best film of the festival, to be awarded the Anim’est Trophy, is shortlisted for the annual Cartoon d’Or Award (the best European cartoon short) and is eligible for consideration for the Animated Short Film category of the Academy Awards.

The submission is online and free of charge via www.animest.ro.