Build up to the big performance...

Co-directors of the Oscar® nominated When the Day Breaks (1999) and Wild Life (2011) Wendy Tilby and Amanda Forbis also work occasionally on exciting commissioned projects and in April 2017 they went large. In collaboration with choreographer Jean Grand-Maitre, artistic director of Alberta Ballet, they animated projections for Alberta Ballet’s contribution to Encount3Rs, a commission by the National Arts Centre in Canada’s capital city, Ottawa. 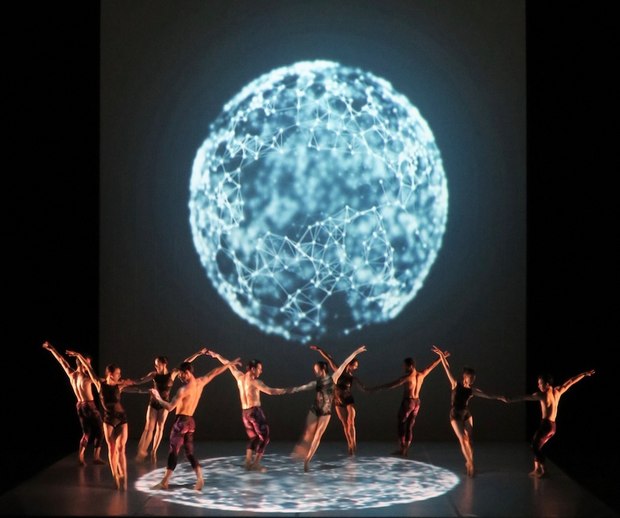 Following on Part 1 of our chat on Skype, here we get more into the nitty gritty of the stage production. Sharon: Take us into your studio. Oh, is this the studio? It looks like a living room. Ok we are here.

Amanda: Yes we are.

Sharon: The previous two projection projects, tell us a little bit about making them. Did you work with a storyboard? How did you actually create the imagery? Did you paint it by hand?

W: We approached each project quite differently. For Mozart’s Requiem we used stock footage – one shot for each movement, twelve in total. We were projecting onto a black scrim in front of a two-storey Hollywood Squares-type set, filled with over a hundred singers all dressed in back robes. The projections were hard to see so the images had to be very simple and super high contrast.

A: And the themes for that ballet were very... big… life, death, you know, the Requiem... W: You got it. And that's the interesting thing about the stage – you can get away with big and bold. Our films tend toward the subtle so this was quite a departure for us. We had a good time going through stock shots, finding elements that had the right movement and emotion. We used clouds, star fields, lightning, falling leaves…and we played with speed, composition and contrast. Oh, and birds.

A: Sea eagles. They lock feet when they're fighting, and they twist in the air.

W: And when slowed down, it was balletic – a pas-de-deux. We also used aerial footage taken from a bomber jet, I think from the Gulf War.

A: We weren’t dealing with light subjects...

W: You could the target through the blinking crosshairs...then an explosion below. It was quite chilling.

A: And we had the Twin Towers falling then rising up again. That was Jean Grand-Maître’s idea - his way of bringing the themes of Requiem into the present.

W: He's got a good eye and he's not at all dictatorial. He wants it to be our vision.

A: The Seven Deadly Sins was a very theatrical piece with a strong narrative. It's about two sisters, both named Anna, who travel and perform around America and in each new town Anna meets another deadly sin. One of the Anna's is very moralistic and intellectual, the other the more feeling one. Our job was to create backgrounds as well as surtitles translated from the German on screen. We didn't actually do the translation, we used W.H. Auden's translation. But we had to thin it out, which is sort of a daunting thing, thinning out W.H. Auden.

W: We distilled it down to small nuggets of text. The fun part was playing with fonts and finding interesting ways to animate it.

S: The surtitles have a humorous element to them. They feel musical, and charming, and yet the story is so loaded.

W: But it's also cheeky. The director, Yukichi Hattori, who was also one of the star dancers of the Alberta ballet, has a really interesting sensibility, very campy... A: The original is campy too because, for one thing, the mama is an absolutely gigantic man in a house dress. So that's built in from the beginning. And you know how brutal Brecht can be ... Brecht wrote the lyrics and he can really belt you on the head with them, but there's always that dark humor under it. And Auden's translation was fabulous, there are just so many funny things in there. So that was quite a pleasure, really fun.

W: But we had something like... how many? Seventy-something …

W: It was a challenge…particularly as the images were serving as simultaneous translation – it was important that they be in sync with the singers!

S: And compared to animating a film?

W: It is something else again - something in between.  We love working in response to the music and the vision of the choreographer. It’s a team effort and everybody is striving for art, there's no doubt about that.

A: Particularly the dancers - they are such team players. I have such admiration for how they can remember what they're doing. Watching the rehearsal process is astounding. Everybody's got this goal in mind, and everybody's tense, and everything comes together at the last minute. There's something about it, the catharsis is quite different from finishing a film which can be kind of devastating, or a real let down. There's a kind of void that your film drops into.

A: And even though the theatrical run is very short - three nights and it's gone, doesn't even exist anymore - something feels immediately resolved about it. As an experience, there's something magical about theatre – about seeing all the elements come together. The team effort is really fun for us because it's not how we normally work.

W: Fun and nerve-wracking. Working with orchestras, lighting designers and dancers... these are people at the top of their game, and we don't want to let them down.

A: And even if we’re sick of our part, and not happy with some bits of it – we’re just thrilled with what they've done, so we get more unearned thrills in the sense that it didn't all come down to just us. That's true collaboration at it's best, I think.

S: Tell us about the actual making of the projection imagery for Caelestis, Alberta Ballet's contribution to Encount3Rs. How did you go about creating it?

W: This one is by far the most challenging. In part because we’re projecting on two screens – wall and floor. Also because we’re animating a lot of it - which is crazy because it’s thirty minutes long! A: …though many of the images are quite simple and abstract. I've been doing a lot of After Effects tutorials on YouTube and discovered some very beautiful effects. It just feels like cheating on a grand scale. And we have some sections where we're using our usual gritty, boiling textures and hand drawn lines that we love. To have that handmade element is important to us.

W: But we've bitten off quite a bit. Conceptually, it’s a puzzle. Sorting what to do for each section of the music is probably the trickiest part. We want it to be coherent – not merely moving wallpaper. And nobody said it even has to move it’s just that the music is so…

W: It’s a really interesting piece. Exciting. It has an energy that is begging for lots of boiling and movement.

A: So that’s what we’re doing.

W: We began by listening to the music, getting a feel for it. We then started throwing images at it on a timeline to see what works in terms of shape, movement, emotion. S: It sounds almost like sketching with whole images, almost like a composer working with an orchestra where they’re bringing up the horns, some of the strings, and now going to percussion. Just get it all in there, and then okay we're building something, something's really happening.

W: Exactly! It was never storyboarded but we did make a kind of map of the timeline based on Jean's concepts and choreography notes. He used words like ‘primitive, sophisticated, symmetrical, aggressive, cellular big bang, spectral climax’….

W: We also have our friend Nicolas Mermet working with us on one particularly challenging scene. He’s an After Effects artist in LA. We love collaborating with him - he’s very creative and good humoured and exacting in his work.

S: More and more people are working in collaborative projects like this so it's also about how we communicate ideas when we're coming from two completely different artistic practices. I'm wrestling with that now, animating for an opera.

A: So true! When we watch rehearsals, it really is as though they are speaking a foreign language. I just cannot understand how what Jean says is translated through to a dancer, and the dancer does it. It's just fantastic to watch.

W: And because of schedule constraints, the choreography and animation are happening at the same so it’s a bit of a crapshoot as to how it’s all going to come together in the theatre…it means we’re counting on some beautiful coincidences.

A: It’s a bold experiment! Three performances of Caelestis took place between April 20 and April 22. The stage images above are from the live performance.

For more on video projection as an art form :

Book: Being & Time: The Emergence of Video Projection by Marc Mayer

article: Using Projection as a Theatrical or Digital Backdrop

‘My Dad the Bounty Hunter’: Representation Beneath the Skin
The Massive Creative Fellowship Behind ‘The Lord of the Rings: The Rings of Power’
‘The Dragon Prince’ Director Villads Spangsberg Talks Toonlines and Tough Challenges
Laurence Fishburne and Steve Loter Talk ‘Marvel’s Moon Girl and Devil Dinosaur’
Taking an Old-School VFX Approach in ‘All Quiet on the Western Front’
‘Natural Habitat Shorts’: Like ‘Ranger Rick,’ But for Adults
Framestore Sets Sail on ‘1899’ with New Virtual Production Tools
VFX is the ‘Thing’ for Tom Turnbull on Tim Burton’s ‘Wednesday’
END_OF_DOCUMENT_TOKEN_TO_BE_REPLACED