Under the Radar is an annual animation festival and interdisciplinary conference for animation, experimental film, media arts, and connected fields of research and production. 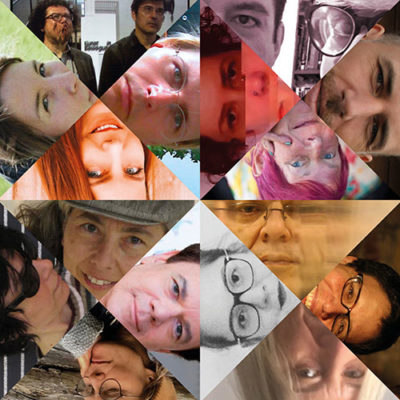 Under the Radar may be small in size but it is large in content.  It is an annual animation festival and interdisciplinary conference for animation, experimental film, media arts, and connected fields of research and production. The mornings were devoted to the conference where 19 papers were presented over the five days by professionals and scholars from around the world.  The topics were extremely diverse.  Noel Palazzo, a co-founder of Punto y Raya Festival in Spain, spoke on the topic of Eye-Fidelity: Identity Construction in Abstract Animation.  She discussed how contemporary abstract animation offers new approaches to our notions of identity, memory, and time. In Dreaming and Animation, noted animator and educator Ruth Langford referred to Freud’s description of dreams as “the royal road to unconscious” and posed the question “Could the same be said of animation?” Renowned Norwegian animator Anita Killi is a master of cutout animation.  For her presentation Reality and Feeling in Small Paper Pieces”, she first showed pictures of her studio which is located on her farm in the Norwegian mountains.  Anita talked about the process she uses with her multiplane camera and cutouts on a traditional glass table.  After screening her award-winning films, Angry Man (2009) and Hedge of Thorns (2001) she showed Mum’s Hair.  The touching film was made by her daughter, Maja Arnekleiv in 2017 and chronicles Anita’s battle with cancer through the loss and regrowth of her hair. To round out the presentation Anita, showed a trailer for Christmas Survivors, her first feature-length film which is in development.  The story centers around 9-year-old Maja and her little brother Ola who are sent by their mother to spend the Christmas holidays with their step-grandmother and uncle.  The generation gap and differences in lifestyles challenge the relationships between the family members.  An old Nisse (a traditional Norwegian barn gnome) plays an important role in resolving the doubts and prejudices that haunt the family in the days leading up to Christmas. Anita is also currently working on a 10-minute short film, Mother Didn’t Know which broaches the subject of child depression.  It is scheduled to be completed in January 2020.  You can find out more about both projects and see clips of them at:  www.trollfilm.no

Jorgelina Orfila and Francisco Ortega-Grimaldo, Associate Professors in the School of Art at Texas Tech University, Lubbock, Texas discussed Identity Shifts: Migrating from Analogue to Digital Practice.  The pair analyzed the transformation of two beloved real-life characters in Mexican popular culture into animated characters.  Cantinflas and El Chavo, as Mario Moreno and Roberto Gomez Bolanos were better known, turned to animation in the latter stages of their career due to age and health problems.  The animated televisions series prolonged the life span of their alter egos: The Cantinflas Show) 1972-1982 and El Chavo Animado (2006-2014).  Jorgelina and Francisco’s exploration of well-known real-life personas into animated characters was accompanied by extensive film clips and visuals.  It was an extremely interesting and enjoyable presentation. I presented a paper on Unsung Women Heroes of Animation.  I began by outlining the lack of recognition received by pioneering women working in the early day of animation with a brief introduction to 8 female heroes.  I concluded with an in-depth look at the career of the great British animator Joy Batchelor, the creative force behind Halas and Batchelor Animation Studio.

Each evening there were three screenings of competition programs or special retrospectives.  The 84 films in the 6 competition programs were extremely diverse.  In a serious vein Jack the Ripper – Then and Now, a 2minuute 23-second film by Haemin Ko from the United Kingdom, left an impression on me.  The premise of the film is that since Jack the Ripper was never caught and some people believe he could have been more than one person, should he be represented as only one man?  By not knowing Jack the Ripper’s identity, we infer that he could be any one of us or all of us and that in today’s society he rips women’s hopes for a brighter future, he rips their dreams into domestic submission and rips out their self-esteem as well as their ability to control their own bodies.

In the 1950’s Croatian animator Nikolina Bogdanovic’s grandmother’s sister immigrated to Germany with her husband.  The photographs that she sent home documenting their new life in the West form the basis for Nikolina’s film which evoked complex thoughts and memories of bygone times.  The Place from Where I Write You Letters is more than just a young wife proudly showing off her new sofa and stove.  It is an examination of the interiors of everyday life.   The jury awarded Bogdanovic the Radar International Award for her film.  The award is a 2-month residence at Q21 in Vienna along with a 1,050.00 per month stipend to cover expenses.

At the other end of the spectrum was Grilla Thrilla, a 5-minute student film by Sabrina Kainz, Doris Blatterbinder and Jens Cherukad from Austria.  The story revolves around Georg, a taxi driving gorilla, who longs for adventure.  When it finally happens and he becomes involved in a major crime, he is not so sure about what he has gotten himself into.  The film seamlessly merges film noir and a Hollywood film set with 1940’s Vienna and it has a nice payoff at the end.  The jury gave Grilla Thrilla a Student Special Mention.

My favorite film in the competition was Austrian animator and media artist Reinhold Bidner’s In Trance It.  The film is a 6 minute trip through Vienna’s Kunsthistoyisches Museum which is full of portraits of people long dead.  Using crossfading and morphing techniques, Reinhold has made the portraits come alive as they blend and merge one into another.  If you watch very closely you will see that Reinhold has managed to incorporate a picture of himself into the film. In Trance It took home two awards.  The Radar Austrian Award which is 1000.00 Euros donated by the Collecting Society of Audiovisual Authors and the Hubert Sielecki Award of 500.00 euros.  Mr Sielecki selected one film from all of the Austrian submissions for his special award.

One evening we were taken to the beautiful Blickle Keno for the evening’s screenings.  It is the only intact 1950’s cinema house in Vienna.  Designed by architect Karl Schwanzer, it was initially constructed as part of the Austrian Pavilion at the Brussels World Fair in 1958.  After the fair, the building was dismantled, reconstructed, and renovated as part of the Belvedere Museum complex in Vienna.

The lower Belvedere contains artwork from several periods in the Baroque former residential palace of Prince Eugene.  Across the massive formal gardens is the Upper Belvedere.  This Baroque palace is home to paintings by Klimpt, Schiele, Funke, Monet, Van Gogh, and so much more.  Along with the beautiful kino, the Blickle also houses contemporary Austrian art from the 20th and 21st Century.

The first program was Identity Construction in Abstract Animation created by Noel Palazzo.  At her screening, she showed a strong section of primarily very short but strong films.  Max Hattler’s 1-minute multi-award-winning Collision was a perfect example.  Comprised of Islamic patterns and American quilts with the colours and geometry of the flags, the film is a strong political statement.

Ukrainian animator Nikita Liskov’s 1 minute 46-second abstract animation Energy Off centers on the existence of energy in time and space.  The program opened with Descent, Dutch animator John Rijpma’s 1 minute 26-second animation.  In the film, a cylindrical shaped cup falls and shatters into pieces.  Every frame of this fall is recorded and then manually translated into a ceramic sheet that is made from the shards of the original cup.  All of the layers are then arranged vertically and glued together, forming a new object that visualizes the destructive movement. The highlight of the evening was a tribute to Austrian filmmaker Peter Putz.  The screening began with the premiere of his 38-minute film The Eternal Archives: Putting in Order and Being Put in Order. Created by Putz in 1980, The Eternal Archives is a dynamic encyclopedia of contemporary identities.  It is one of Austria’s most comprehensive, non-commercial, independent image databases with images dating back to 1905.

The focus is on photographic note-taking to preserve traces of everyday life, documenting and comparing a variety of places where people live and work.  The images have been collected into thematic tableaux.  The film was produced during the 9 months that Peter spent as artist in residence at Concordia University in Montreal.

Putz’s 2-minute 1978 film OBUWIE was also screened.  This was his first animated film, made when he was an artist in residence in Poznan, Poland.  It tracks the amazing metamorphosis of a shoe.  Along with TV Montezuma, a bizarre journey through the mysteries of drawing and video, Paris Paname was also shown.  This fascinating film documents the political and social changes in 1990 Paris leading up to the right-wing National Front Party’s 1st of May march.  It is a unique portrait of Paris, miles away from the familiar images of Montmartre and the Eiffel Tower.  The program ended with a 4-minute preview of Putz’s work in progress titled The Eternal Archives: New Stuff.

One morning was devoted to Radar Pitch.  The 7 projects presented were in all states of completion from early development to works in progress as well as 2 gallery installations.  Along with Marie Ketzscher, PR officer for the Berlinale and freelance journalist; festival distribution manager at Miyu Distribution Laure Goasguen; and I were the members of the pitching jury. Two projects stood out to us.  Austrian artist and animator David Kellner’s thegermanwordgiftmeanspresentinenglish was a big audience-pleaser accruing a lot of laughter and loud applause.  The jury loved his simple line drawings and outrageous humor.  In awarding David the pitching prize of 1,000.00 Euros given by the Vienna Chamber of Commerce, we stated, “We have awarded the prize to a project whose unconventional humor and obvious public appeal was recognized immediately by the jury”.  It is obvious that David has a real talent for punchy, short one gag films.  I hope that he will use his award to create 2 or 3 of his short, cleaver hand-drawn pieces.  I look forward to seeing more work from him.

We also gave a Special Mention to Josie Keller for her project Edie – Screen Test, a work in progress gallery installation loosely inspired by Andy Warhol’s work.  The Austrian born visual artist currently lives in the United States.  Her installations are lens-based images projected onto small scale puppets that are filmed and then projected large scale on the wall.  Josie’s work has an unsettling effect à la David Lynch.  In awarding the Special Mention to Josie we said it is “ . . .a project with a unique and at times disturbing style that spoke to us because of its original use of glitch, choppy animation”.

Under the Radar was a wonderful experience.  The Symposium opened my eyes to new ideas about animation processes and theories.  I recommend Under the Radar to anyone interested in experimental film and media art.  My sincere thanks goes to Holger Lang, visionary and festival organizer, for inviting me to be part of this exciting event.  Holger and his entire team did everything possible to make my stay in Vienna memorable. The 2020 edition of Under the Radar will be held 26 – 30 April.  There is a complete list of all of the winning films at the end of the article.  You can read more about the 2019 edition at:  www.under-radar.com