Final reflections on the power of impartial and broad-minded ideation on dissimilar domains, disciplines or objectives, as well as how such can be inspired by most unlikely Muses.

But time does not stand still, especially in China… Off and away we fly to yet another city in its southern region. As we descend it becomes clearer, even more than was so obvious in the previous city, that this setting is, even more so, struggling to emerge from the past in order to embrace prospects of the future.

Taking a much desired interval for however a transitory mental meltdown, striving to avoid the generic, “civilized” shopping malls and even here the somewhat Westernized boroughs of this city, we ventured to the spaces where the true, unadulterated and naked realism is allowed to honestly stare into our inflated eyes only to mingle and mangle our minds, thus provoking my Western perception of a “civilized” reality. 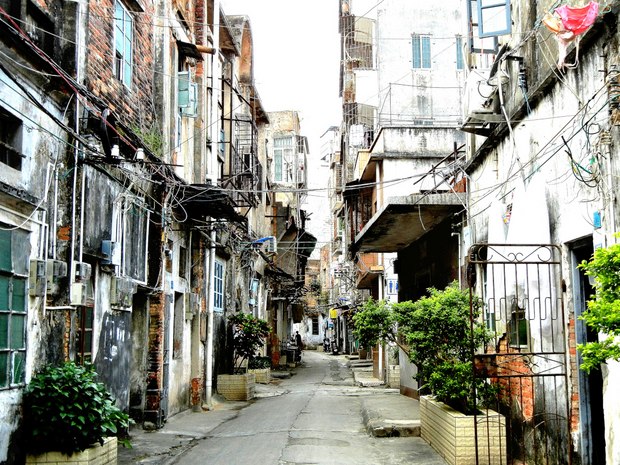 From the pretty company escorting me, a woman eager to answer my probes and explain circumstances we were encountering, but whose English was far from perfect, digesting the few words she knew, I gathered that this very poster endeavors to petition its accidental passers-by through appealing to them not to eat dogs. She seemed somewhat ashamed and disturbed by having to disclose the existence of such a tradition being practiced among her natives, yet calmed by my admitting to her that I have seen such habits elsewhere.

Yet, once again, we are reminded of the objective behind our visit to this city struggling to shed its past. And so, picked up by our gracious hosts, I find myself driven in a delicious, lavishly expansive Porsche. Soon, as the aspiring city falls away into the distance, past the boundless scooters and bicycles swirling everywhere, overtaking in the dust swarms of grey, unassuming, unpretentious and docile automobiles, we distance ourselves from the familiar signs of human civilization only to enter another space and time.

Out of the luxurious comforts of the lusciously arousing, mouth and mind watering Porsche, I step into a dusty and odorous milieu which is about to spin for me another profoundly emotional and touching story.

We are led towards a dilapidated one-level structure. As we near it, out of its many door-less doorways pour out tiny curious and puzzled children, while others pop their little disheveled dusty faces through the glassless windows. This, so I am informed, is a primary education schoolhouse. It is tiny, gloomy, pitiful, dirty…a miserable little edifice. It was cheaply constructed way back when, on a former swine farm, within a time forgotten insignificant village encircled by a wasteland of poverty, ignorance, indifference, backwardness, destitution, all of them disremembered by time and ever shifting civilization as we know it.

Misled by the sight of the little kids emerging from the questionable toilets, yet myself in need of relief, I chose to take my chances. But the moment I ventured in, I was overcome with intense nausea infused by the penetratingly reeking stench which human vocabulary is simply too feeble to define or describe.

Yet who am I to comment, criticize, protest or question? For I am just an alien descending from another reality, space, perception, or time, trespassing their habitual veracity, however questionable such might seem, considering this eyes piercing, face slapping, nose assaulting and mind boggling an encounter.

Whenever roaming, always with a camera glued to my side, I instantly and instinctively considered pulling it out of its soft, protective casing. Lucky it. Yet at the very same instance this pictorial desire ignited in my mind yet another, opposing one, challenged it with even more poignant a force. Who am I to take photos of these little kids as though they were some exotic animals or creatures rarely seen before? For, if the situation was reversed, how would I feel in their place? What would I think of such a stranger?

And as this turmoil flooded and twisted within my mind, I realized that more than any photograph, or any other form of visual interpretation or depiction, this reality is most effectively and vividly defined, as well as forever imprinted on my mind, by its assaulting and penetrating vile smell, intensely reminiscent of an abandoned yet in no possible way forgotten, filthy, drowning in reek and rotting in manure pigsty.

Yet, it is likely that this potent vision of despair, depravation and innocent ignorance these children have been existing within, is what lit my swirling mind with vivid ideas and images of how this lost in space milieu could be transmuted into an amazing, inspiring vision of transformation that, once realized, could then be transplanted to other such deprived environments, of which there is no shortage, whether in China or around the world at large. In this manner we, the truly fortunate ones, can bring light of awareness and hope to those who otherwise are destined to exist in perpetual ignorance, disregard and blind despair.

But, in essence, all it takes is willing imagination, sincerely felt care for others, plus determination for making a difference. As I processed the visual and intellectual flood of information I realized that I was invited here to offer ideas, a fresh and external creative perspective on how this extreme situation can be reinvented and infused with hope by those willing to invest into such a weeping for reincarnation scene.

Thus challenged, I began to grasp that altering this little school on its own is doomed to failure unless its environment, the entire village, the very parents of these little children, their teachers, the lifestyle of the entire habitat, in other words, the whole entire eco-system, are seen as part of this exhilarating construct. Yet wouldn’t it be great if one day I learn that someone embraced my vision and turned it into a reality?

In conclusion, against all odds, anticipations and pre-existing expectations, I found myself realizing that a Muse of Inspiration can be all but beautiful, tempting, arousing or deliciously sensuous. Instead, it might embody itself in an old, ugly, dilapidated, all twisted, withered, crippled and ravaged façade. Devastated by passage of time and weathered by unforgiving elements and human indifference, greed, ignorance or shortsightedness and negligence, it can be astoundingly enthusing to the eye, mind and imagination of anyone with an inner aptitude to gaze through its repulsive outer shell and into the depth of its inward promise, hope for reincarnation, for a new turn in life that could be, that awaits, if only given a chance.

I do wonder, or is it wander, whether the fact that this trip took me away from the known reality only to have me celebrate my birthday in a distant and poignantly contradictory space has any deeper and yet unrevealed to me connotation? No matter. My gracious hosts clearly appreciated my being there on such an auspicious occasion and sincerely wished to make it a memorable one for me. So, in preparation for a celebratory dinner, they took me to a massive fish market where we gathered all sort of known as well as utterly unfamiliar oceanic life forms, a medley of which the oddest, to me, were the sand worms. That very day, together, despite no common language, we concluded the evening with a scrumptious feat, an enormous 3-liter bottle of Cognac and an unusual but delicious Uni Shooter, bound to kill any worms. Salute to each and all, no matter what language you speak… or not.

Taking an Old-School VFX Approach in ‘All Quiet on the Western Front’
‘Natural Habitat Shorts’: Like ‘Ranger Rick,’ But for Adults
Framestore Sets Sail on ‘1899’ with New Virtual Production Tools
Animated Characters: The Art of Babbitt – Part 1
Bruce Smith and Ralph Farquhar Talk ‘The Proud Family: Louder and Prouder’ Season 2
VFX is the ‘Thing’ for Tom Turnbull on Tim Burton’s ‘Wednesday’
We Need to Chat
F is for Flake: The (Not So) Great Animation Robbery?
END_OF_DOCUMENT_TOKEN_TO_BE_REPLACED