My favorite gifts every holiday season are books, and I received two early presents this year that I want to share with you.  If you are still looking for a perfect gift for that animator on your list or want to treat yourself, check out my review of International Perspectives At Animafest Zagreb: Global Animation Theory.  The second book is Azerbaijani Animation.  Unfortunately, it is currently published only in Azerbaijani and Russian, neither of which I can read, so the review written by the book's principal author, Rashid Aghamaliyev is for my Russian speaking readers.  I will say that the book is beautifully illustrated, and I did learn a lot about the history of Azerbaijani animation by looking at the pictures.  Happy holidays and good reading. 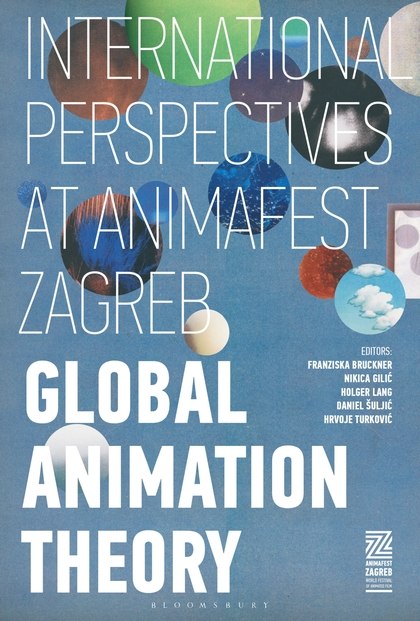 Animation theory has been a growing topic of discussion, and 6 years ago it reached a new level of quality with the advent of Animafest Zagreb Scanners Symposium for Contemporary Animation Studies.  The symposium is held annually during the Zagreb Animation Festival. It brings together such top people in the field as Jane Pilling, Olivier Cotte, and Paola Bristot to discuss wide-ranging topics from Animation and History and Animation and Fine Arts to Animation and Feminism.  Now 14 essays selected from papers presented at the first 3 years of Scanners by the editors, have been collected together in International Perspectives At Animafest Zagreb:  Global Animation Theory.

If you think that a book on global animation theory is going to be dull you have another thing coming.  The first of the 14 chapters in the book is a delightful remembrance by Marcin Gizycki titled Animation Since 1980 - A Personal Journey.  In his readable style and with a touch of humor, Marcin recalls participating in the Zagreb International Festival in 1980 when he was the editor-in-chief of the ASIFA quarterly Animafilm.   He then goes on to talk about the changes in animation that he has witnessed throughout the years as well as examining the important place political animation plays in responding to political events.  As well as being a film critic and animator, Marcin is the Artistic Director of Animator International Animated Film Festival in Poznan, Poland so his words about films and festivals are well worth listening to.

In the first section of the book, Historical and Theoretical Approaches >From International Studies, the 7 chapters are by such well-known authorities as Paul Wells, who explores the work of recently rediscovered Cold War Hungarian animator Gyorgy Kovasznai and the contemporary artist who he has been compared to, South African William Kentridge.  Olga Bobrowska, a Chinese animation historian and director of the StopTrik Animation Festival, delves into Seeking Truth In Facts:  Historicizing Chinese Animation.  Her insights into the founding of the Shanghai Animation Film Studio and the pioneering experiments of the Wan brothers and the master of wash-and-ink animation Te Wei have made me look at Chinese animation of the 1950s in a different light.  I had also never heard of Duan Xiaoxuan, an animated film cinematographer who played a significant role in the Shanghai Animation Film Studio's success.  I am now anxious to learn more about her.

Sarajevo born writer, film scholar, cartoonist, and filmmaker, Midhat Ajanovic-Ajan takes a comprehensive look at The Context and Development of Animated Documentaries, The Cornerstone of Modern Animation In Sweden. The animated documentary is one of my favorite areas of animation; so many important, personal stories can be told using this medium that could not be told in live-action and at the top of my list are Swedish animated documentaries.  Midhat first gives a general history of animated documentaries in general before going into detail about the beginnings of the Swedish version of the art form beginning with an account of Victor Bergdahl, who made Sweden's first animated film and coming up to present day and Jonas Odell, who he refers to as "the genre's foremost practitioner" of the genre both in quantity of animated documentaries produced as well as in artistic and cinematic quality-

The remaining 7 chapters in Section 2 feature Case Studies from Around The World.  Moscow born scholar and critic Mikhail Gurevich attempts to interpret Yuri Norstein's classic animation Tale of Tales in Mikhail's fascinating . . . The Film Is Not About That . . . Notes On (Re) Reading Tale Of Tales, and the current Head of the Animation Department and lecturer on Animation Theory at Tehran Art University in Iran, Fatemeh Hosseini-Shakib gives fascinating insights into the world of Barry Purves with an emphasis on Barry's 1992 film Screen Play.  In The Puppet As Non-Puppet, The Notion of Puppet As Human In Theatrical Performance In The Works Of Barry Purves, Fatemah examines the place of realistic puppets in the world of animation.

Each of the 14 articles contains a comprehensive list of reference books to guide the reader in further study of each topic.  The index is concise, making it easy to cross-reference topics, and there is a biography of each contributor.  The 288-page book, with an introduction by noted animation historian Giannalberto Bendazzi, is a welcome addition to the library of anyone who is interested in furthering their knowledge of historical and important trends in film, media, and cultural studies.

At the bottom of this article are order form/links where you can order the book at a discount from the UK or US: This colorful book is dedicated to the history of Azerbaijani animation. Thanks to compiled efforts and research carried out by Azerbaijani and European film scholars, readers will learn a wealth of new information about the development of animation as an art in Azerbaijan. Unique works presented by directors and artists working in the animation field have been published in the book for the first time.

The goal of the Azerbaijani Animation book is to promote the art of animation in Azerbaijan and abroad. The aim of the authors is to preserve the history of Azerbaijani animation for future generations. The book is a useful resource for artists, directors, animators, writers, art students and anyone who is interested in art. The colorful pictures and easily understood language make the book very interesting for children, too.

The book came out as a result of joint research that took longer than a year. It includes 19 articles published by 13 Azerbaijani and European authors. The style of the book is very clear and interesting to both general readers and film scholars.

The book was published in two languages: every chapter is written in both Azerbaijani and Russian. The book is also planned to be published in English, Arabic, Czech and French in the future.

The role of animation directors and artists was invaluable in the publication of the book. They provided the authors of the articles with information on their creative work and technical details of production. In addition, some of them presented their valuable works which were published here for the first time.

The book Azerbaijani Animation was published as a result of a two-year crowdfunding campaign, which was supported by people living in Azerbaijan and abroad. The book project was financially supported by more than a hundred people. As promised in the course of the crowdfunding campaign, the names of donors who sponsored the project were published in the book in alphabetical order.

The first presentation of Azerbaijani Animation took place in the Magic of Animated Films exhibition in Prague, Czech Republic in 2017 and then in the opening ceremony of the 1st Animafilm Baku International Animation Festival in 2018.