Steven Subotnick is an independent animator working in a unique experimental-narrative style. 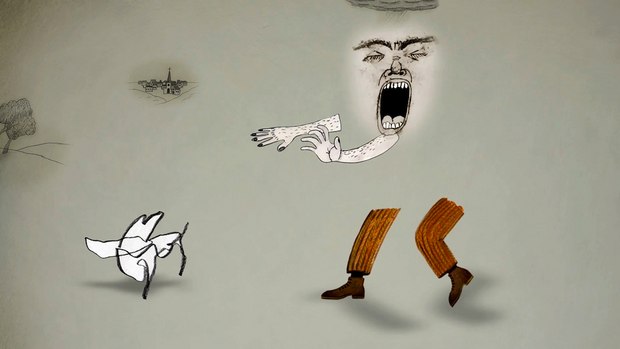 Steven Subotnick is an independent animator and teacher of animation. Working primarily with textured line and an earthy palette, his films are narrative yet experimental. He lives and works in Rhode Island. I caught up with him by email.

Sharon: Steve, I notice that in your bio you describe yourself as an experimental animator. What does it mean for an animated film to be experimental?

Steven: All my films are experimental in that I have questions in mind and I explore them through the process of filmmaking.  I don’t sit down to make a film based on any preconceptions.  There is no scripting, storyboarding, or planning of any kind.  Instead, filmmaking is a process of discovery.  I begin with an aesthetic impulse that usually comes from something I’ve read, seen, or listened to. For example, films have come from reading a history of the Defenestration of Prague; from listening to a lullaby from the island of Guernsey; and from looking at a fossil of a Cambrian creature. In any case, I begin making artwork in response to a thought or emotion I get from these sources, and eventually this artwork may evolve into a film. While reading histories of the Thirty Years War, I made a series of aggressive gestural ink drawings as a response to the descriptions of religious violence. I put the drawings away for several years, and then one day took them out again to see what I could do with them. These became my film, TWO, in which two vertical abstractions engage in a sort of dialog based on timing. Although TWO is not about war, the animation retains the central idea of two entities arguing with and affecting each other.

My approach to sound design is equally experimental. The identity of the visuals becomes clear only when I begin making the track. I do a lot of hunting and pecking at first, trying to find sounds that create a resonance with the images. To help me organize these experiments, I divide sound into the three basic categories - voice, music, and sound effects/ambience - first trying one, then another. Building the sound track is sometimes the best part of filmmaking because good pairings produce a presence that is greater than either image or sound alone.

I think the definition of an experimental film will differ depending on who you ask.  In my case, making an experimental film is like writing an essay. As an essayist tries to understand a topic through the process of writing, so I try to understand a topic through the process of filmmaking. I start with a question rather than an answer. For me, a question might be something like, “What would happen if I found my entire film in this one image?”, or, “How can I visually express the complexity of a character’s identity?” This essay approach is in contrast to the goal-oriented idea of making a film through scriptwriting, storyboarding, or other plans for the way a project should turn out. Instead, I trust the process of trial, error, and intuition, and the film evolves organically. So for me, being an experimental filmmaker means that each film is a process of discovery and surprise.

Sharon: Your process of discovery sounds marvelously open-ended. But short animations are most often viewed only once through, usually at a festival where they’re sandwiched between other short films. The viewer has only a short time to grasp what you want to communicate. How do you structure a beginning, middle, and end from this very organic kind of raw material? How do you pack these visually complex ideas into such a condensed format?

Let's look together at your film TWO for example. It’s one of my favourites because the visuals are so textured and open, and the soundtrack is so dense and resonant.

Tell me more about the making of the film. When you first returned to the images years after drawing them, how did you begin to build them into a film?

Steven: As I mentioned before, I made these drawings a number of years ago while reading about the Thirty Years War.  I had set myself the task of studying the historical, cultural, and spiritual milieu of the conflict, and then instinctively making my own animation sequences in response.  The result was my film, “Glass Crow”.  These drawings did not end up in that film, so I saved them for some later use.

I made these ink paintings on 8.5 x 11 punched paper.  I placed a 6-field mask over the paper as I brushed with a rag dipped in ink.  The mask created a more or less self-matted image, although there were irregularities in the edges because the ink invariably bled out of the masked area a bit.  I liked these irregular edges as much as the main images, so I scanned each 8.5 x 11 piece of paper into the computer in its entirety.

Years later, I was in the middle of creating a series of short animations based on strict limitations.  Limitations can be very creatively freeing and energizing.  In this case, I chose to work with just one sequence of about 80 paintings, and I made a rule that I would finish the film in two weeks.  I looked at this sequence and began thinking about how the limitation of the small black image in the middle of a blank white screen created energy and focus.  I thought there might be a short film idea in it, so the first thing I did was to offset and layer the sequence on top of itself.  This increased its graphic density, multiplied its motion, and created a new visual identity from the original sequence.  I liked it, but I wasn’t sure where to go with it from there.

It wasn’t until my wife (and independent animator), Amy Kravitz, suggested that I try turning the shape on its side that I figured out how to move forward.  By making the rectangle vertical, there was now space for two of them on the screen.  Once they were side by side, the two rectangles began to have a dialog with each other.  With their sudden sharp movements, I felt the two rectangles were having a kind of argument or intense conversation through image, movement, and timing.  I edited the film with this idea in mind, adding holds, fades, and visual effects where necessary.  I love editing and it is during this stage that my films are fully realized.  My last decision was to add the slow fade in and fade out of the drawing edges as the beginning and end of the film.  Because these images were so clearly ink drawings, I wanted to bring them in and out of the paper itself.

I made the sound track after the picture was completely finished.  I was looking for sounds that represented the paper/background as well as the drawings/figures.  The more constant, drone sounds were for the background; the more dynamic musical phrases were for the figures.  There was something about the two shapes that evoked yearning and tension, which is one reason I was attracted to the Balkan flavor in the music.

Sharon: How do you know when a film will be grasped by the viewers in a once through screening? What happens, for example, when the film is as much about texture (or other formal elements) as story, as I find in “TWO”? I'd love to spend more time with each of the drawings.

In fact, you strike me a very material artist. Does it sometimes happen that a once through viewing (a festival screening for example) means the viewers would miss important subtleties and complexities? Is that a concern of yours?

Steven: I like the idea of appreciating a work of art through multiple viewings. In fact, I consider it a great achievement when a work rewards repeated viewings with new insights. Ideally, every viewing, including the first, would provide the viewer with a fresh understanding. Although I can’t claim that kind of success with TWO, I think the film does function on narrative, visual, and musical levels.

Even though TWO is an abstraction, it still has a narrative structure. Film, like any time-based medium, has a built-in tendency for narrative because it presents a sequence of events. Our minds look for meaning in these events, so even the most abstract films can be narrative. This tendency to look for human content and meaning was also true for me as the filmmaker.

Although I didn’t intend to make a particular narrative, one emerged through the filmmaking process. In this case, two entities become aware of each other and have a tense, confrontational relationship. This relationship is unclear; it could be an argument, or a dance, or a sexual encounter. After their interchange is over, the two entities fade back into unconsciousness. I think this underlying narrative gives the audience a way to initially understand the overall shape of the film.

On a material level, the animation creates tension between abandon and control. The drawings are very gestural, physical marks, but they are contained within rigid rectangular shapes, and their movement alternates between stillness and rapid chaos. Their abstraction also creates tension between seeing them as drawings or as characters. The sound track is constructed in a similar way. It alternates between slow and fast musical phrases.

If the viewer can grasp and appreciate the overall shape of the film on the first viewing, I think it’s ok if they miss details. Repeated viewings will allow them to appreciate additional details.

Steven Subotnick’s films screen regularly at animation and film festivals. You can catch PIG - his most recent film - online, or on the big screen at the upcoming 2015 Ottawa International Animation Festival (great festival, great films - check out their 2015 selection.) And it was the July 2015 BFI Toon of the Month.

For more info on his work and upcoming projects, see Steve's website.

The Massive Creative Fellowship Behind ‘The Lord of the Rings: The Rings of Power’
‘The Dragon Prince’ Director Villads Spangsberg Talks Toonlines and Tough Challenges
Laurence Fishburne and Steve Loter Talk ‘Marvel’s Moon Girl and Devil Dinosaur’
Taking an Old-School VFX Approach in ‘All Quiet on the Western Front’
‘Natural Habitat Shorts’: Like ‘Ranger Rick,’ But for Adults
Framestore Sets Sail on ‘1899’ with New Virtual Production Tools
VFX is the ‘Thing’ for Tom Turnbull on Tim Burton’s ‘Wednesday’
We Need to Chat
END_OF_DOCUMENT_TOKEN_TO_BE_REPLACED