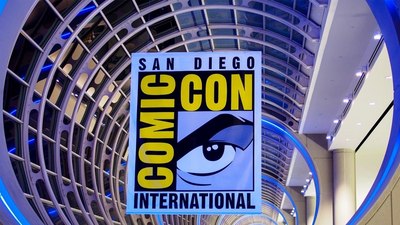 This year’s Comic-Con was the year of the future, and I don’t mean that just because most of the panels and advertising were teasers for upcoming properties. This year the future is now, with robots, haute couture, and Virtual Reality.

The theme was absolutely the shift from traditional media to mobile, starting with Google Spotlight Stories. The panel was made up of a set of animation power hitters talking about how the animation world was going to shift to 360 degree immersive storytelling and what they were doing to send it there.

The general consensus among the panelists was that it’s refreshing to put 2D animators into a 4D world. It’s an intimate setting for the audience who will be part of the story, and close to the hearts of the directors and crews -- mostly because Executive Producer Karen Dufilho-Rosen found her directors (Glen Keane, Jan Pinkava, Shannon Tindle, Patrick Osborne and Felix Massie) and just let them do what they wanted. This is in instance where the films you can see now by downloading the app are truly portraits of the filmmakers themselves. The app is Google Spotlight Stories and is currently only available for Android OS, but they’re working toward a YouTube-compatible platform soon. The way panelist Glen Keane (yes, THAT Glen Keane -- legendary Disney animator and director of Duet) put it, Google Spotlight Stories have to “predict curiosity” and try to put themselves in the minds of the audience to allow them to create interest anywhere the audience might deign to look, even if it isn’t the main focus. He wanted to share the world that animators live in, using the mobile device to create a window into a real world. “Characters exist before you draw them... It’s like a ride -- Pirates of the Caribbean -- where there are stages that have been crafted, but you’re free.”

Jan Pinkava (director of Windy Day, and creative director of Google Spotlight Stories) wanted something “interactive, immersive and different every time you watch it.” And his fellow panelist Max Keane (production designer of Duet) agreed, saying that this new storytelling is an entirely new mindset, one that doesn’t take aspect ratio into account. Rachid El Guerrab, the technical project lead for Google Spotlight Stories, said that this is the translation of gamers to filmmakers. It’s a software not a movie. Lou Romano (art director, On Ice) wanted the camera in the center of the action with a show going on around the audience. The film On Ice was previewed at the panel, and looks absolutely hilarious. Directed by Shannon Tindle, the short follows a bear that manages to find its way into an Icecapades show. They wanted something “as far away from a bear as possible” and of course the only logical conclusion was performances on ice.

There are currently four stories for download on the Google Spotlight Stories app, with two more slated to arrive soon. VR headsets at the Legendary booth.

Staying in theme, this year’s SDCC swag was incredible! The Legendary booth and the SyFy Expanse café were both handing out Google Cardboards with free apps to experience their newest and greatest creations in immersive 3D environments using your smartphone. SyFy’s Expanse café Google Cardboard app was a gorgeous orbital around a transport ship from their upcoming series The Expanse, complete with floating debris, planets and a pulsar. With all the excitement over Pluto, the experience of floating in space couldn’t have come at a better time. Looking around in the vastness of space with Aphex Twin playing in the background was a truly transcendent experience.

Of course the fan-favorite SyFy foam chainsaw hands showed up to honor the newest Evil Dead movie and the T-shirt cannons (okay, people throwing T-shirts) were out in force, but for I and so many others this year’s highlight was absolutely virtual reality. Stations popped up everywhere for attendees to superimpose their faces onto Han Solo’s body frozen in carbonite, ride Batman’s motorcycle, and -- of course -- battle Vikings, but compared to being part of the action in realtime on my phone...there was no contest. Josephine Moss is an animation aficionado with an encyclopedic retention of every animation she’s ever seen. A proponent for geek fashion with a flair for the dramatic, she spends too much time on Instagram and Twitter under the handle hipster_safari.

Z is for Zagreb: The Animafest Zagreb Exhbition 1972-2022
Dude! - ‘Rise of the Teenage Mutant Ninja Turtles: The Movie’ Arrives
‘Super Giant Robot Brothers’: A Milestone in Virtual Animation Production
‘Luck’ Aims to Bring Hope to Kids In and Out of Foster Care
Pre, Tech, and Post: The Many ‘Vizings’ of ‘Chip ‘n Dale: Rescue Rangers’
Hammering Out the VFX in ‘Thor: Love and Thunder’
‘DC League of Super-Pets’: A Family Film Produced by a Family
‘Light & Magic’: ILM’s Story of Family, Fun, and Pioneering Visual Effects
END_OF_DOCUMENT_TOKEN_TO_BE_REPLACED