Scotland’s premier animation festival returns to Edinburgh for a 4th year with stellar line up from Disney Animation to Industrial Light and Magic.

International animation industry leaders, practitioners, students and educators are to gather in
Edinburgh from the 19th to 21st of February 2020 for the fourth MOVE Summit. 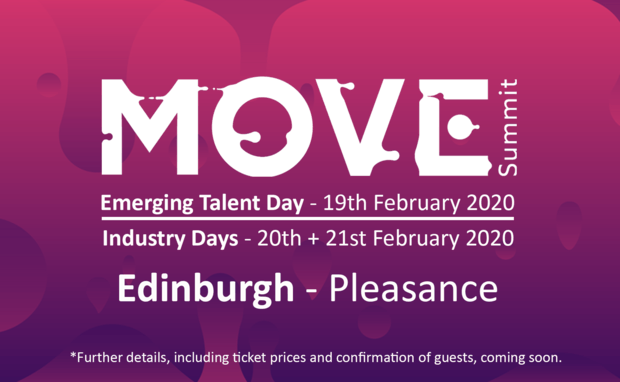 International animation industry leaders, practitioners, students and educators are to gather in Edinburgh from the 19th to 21st of February 2020 for the fourth MOVE Summit. An annual gathering celebrating Scotland’s commercial animation sector, with three days of inspiring talks, workshops, networking sessions and professional development, all focussed around the latest and greatest in the international animation and vfx industries.
Returning to the historic Pleasance Courtyard in Edinburgh for the second year running, we have an array of world-class industry speakers and, for the first time, curated business-to-business and freelance networking sessions as well as our now famous ‘Drink & Draw’ and MOVE Late evening events. We have developed a stellar line up with speakers from international studios, including Disney Animation Studios, Industrial Light and Magic, Blue Zoo, Rockstar Games, and Epic Games, to name but a few. We have sought to bring together a range of speakers talking about some of the latest and greatest work in the industry, and to celebrate their creative achievements from within Scotland, UK, Europe and beyond.
Fresh from a Screen Scotland supported presence at the World Animation & VFX Summit in Los Angeles, MOVE Summit Directors Tom Bryant and Caroline Parkinson made contact with industry-leading lights to create a stellar line up for this coming year’s 4th MOVE Summit.
In recognition of the sector’s support of the Summit and the increased industry cohesion through the provision of a dedicated three-day event, we have this year secured funding support from Screen Scotland, and a new partnership with sponsored activities delivered by Screen Skills UK.
The launch of Animated Women UK in Scotland earlier this year, led by Sueann Rochester, has forged a new partnership with MOVE and Animated Women will curate sessions delivered by leading women in animation.