Blu-ray release of what may be Walt Disney Animation Studios’ best all-animal animated feature ever is packed with extras, including roundtable chats with the character design, environments and animation teams. 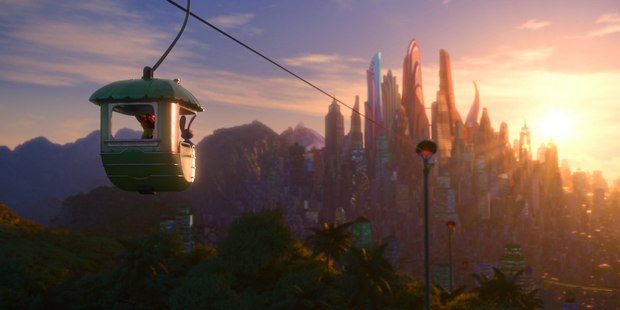 The Zootopia blu-ray package landed in my mailbox recently, so packed with goodies I almost forgot there was a movie on the damn thing…

No need to talk about Zootopia itself any more, except that it may be the best all-animal Disney animated feature ever -- and that includes Robin Hood, the film Zootopia co-director Byron Howard constantly refers to (in person and on the disc’s supplementals) as the inspiration to his career. (Over-exposure to funny animals in one’s youth will do that to a person.) As great as it was in terms of animation and personality, Hood suffered from the sequence-centric weakness of the Disney features of its day, lacking an overall story arc, or any story at all, for that matter.

Zootopia on the other paw boasts a sophisticated plot and a pair of intertwining character arcs, those of its protagonists: cynical fox Nick Wilde and idealistic bunny Judy Hopps. Between their fleshed (and furred)-out personalities, the depth and detail of the city itself (which all but sings in the film’s flawless Blu-ray transfer) and the supple CGI animation, I felt like I was visiting an actual anthropomorphic world and not watching a cartoon of one.

But about those goodies…co-directors Howard and Rich Moore are all over the place, visiting Africa to research boring (by comparison) real-world animals or introducing deleted scenes and characters. For those too lazy to track these things down online, a feature called “The Forensic Files” examines the various Easter eggs buried throughout the film, courtesy of a faux private-eye narrator. (I guess the Easter bunny was unavailable for the gig.)

The supplementals are all zippily edited with snazzy graphics and occasional background music, which worked particularly well in the “Zoology Roundtables” feature: brief group chats with the character design, environments and animation teams. Something that might’ve been boring to non-animation buffs were kept exceptionally lively with quick, snappy soundbites and cutaways to reaction shots or artwork. (Of course, I’d happily watch the raw footage of these chat sessions.)

These sequences reminded me of Walt’s Wonderful World of Disney TV episodes that went behind the scenes of the studio’s latest animated features; without a doubt no small number of grade school kids who, like Byron Howard are fascinated by anthropomorphic animals, are going to discover their life’s calling after watching these sequences.

The Zootopia that might’ve been… one particular deleted scene offers the most fascinating moment on the disc. The film’s original concept -- predators, feared by the prey animals who outnumber them ten to one are forced to wear shock collars to keep them in line, fell by the wayside early on. One can hear the regret in Byron Howard’s voice when he introduces and describes the “The Taming Party” scene. (“It stuck around a very, very long time because we found it emotionally compelling.”)

At the age of five adolescent predators are given their own “tame collar” which administers a shock if they show any aggressive impulses. The kids look at it as an “I’m a grown-up now!” moment, but the adults know it’s a way of keeping them in line -- even though they’re as civilized as the prey animals. (A pair of concept sketches elsewhere on the disc show prey animals viewing predators as scary and dangerous, while its matching sketch shows a predator seeing himself as squashed under an unknowing crowd of prey animals. Evidently the film’s original concept had an element of fear between predator and prey as a basic premise, as opposed to a situation that explodes halfway through the film.)

In my March article about Disney’s Zootopia press junket I asked Howard if there was a moment in the film’s development where it all came together: “Yes, when we flipped the film’s protagonist a year and a half ago,” he replied. “We took what we had shot so far to Pixar to let a fresh audience take a look at it. We didn’t set them up at all, just asked them to watch and be blunt. [WALL-E director Andrew] Stanton said, ‘You’re introducing the film thru Nick’s eyes. He’s a cynic who doesn’t like the city, therefore I can’t root for the city; I want Nick to escape from the city rather than see it healed.”

I suspect dropping this entire plot angle was the “flip” Howard was describing. It was probably for the best; I keep wondering how that version of the film would’ve played out because I can’t imagine it going anywhere except Revolt of the Predators, which doesn’t sound very “Disney” at all.