Angoulême Rights Market Network is a free international venue where comics and graphic novels publishers from all around the world can meet and network. 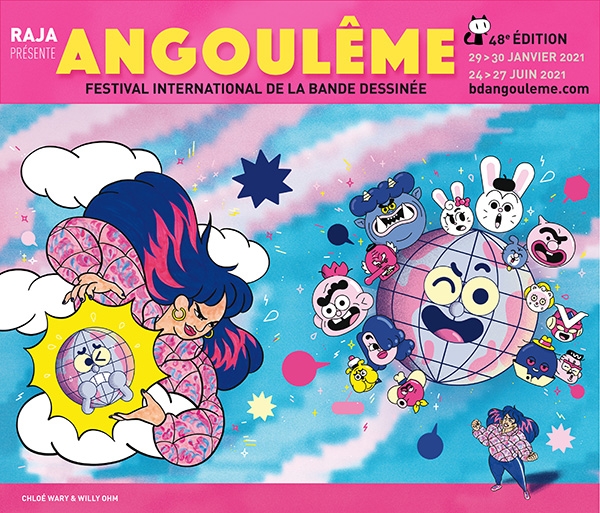 Angoulême Rights Market Network is a free digital platform for registered professionals focused on the sale of comic and graphic novel rights
An international venue where comics and graphic novels publishers from all around the world can meet and network. The 2021 Rights Market (MID) will not be able to be held in its traditional live form in Angoulême. Nevertheless, it is still available for comics industry professionals as an online networking platform, from January 27 to June 27, 2021, linking this year’s FIBD dual format.

Registration is now open to all rights buyers and sellers (publishers, producers, scouts and agents...).

A free 100% comic and graphic novel showcase for international and interprofessional exchanges. The Angoulême Rights Market Network preserves the Think Tank style DNA unique to the MID by organizing a round of online conferences at the end of January, accessible live and in replay.

International webinar opening on the comics markets in France and around the world.
In the morning across the Atlantic, in the afternoon in Europe, in the evening in Asia, professionals from 3 continents gather live to present an analysis of their respective 2020 comic markets.

2 pm (Angoulême time) - in partnership with GfK - Presentation of the annual review of the French comics market and an analysis of tomorrow's trends.
The GfK Institute and the teams of the International Comics Festival co-produce a market presentation; a look back at 2020 and a look into the future.

4 pm (Angoulême time) – in partnership with Europe Comics - Comics and the Digital Shift: Publishing during a pandemic and perspectives for the future.
Comics professionals from Europe and the USA will discuss the impact of the crisis on the wider industry and the digital remedies found along the links of the comic book publishing chain. They will draw lessons from the past year and predict possible scenarios for 2021. Moderated by Calvin Reid (Publishers Weekly).

11 am (Angoulême time) – in  partnership with EUDICOM

Study on the status of European Distribution of E-comics.
Representatives from the EUDICOM consortium as well as the EU Commission will present the EUDICOM project activities for the next 18 months and will be happy to show the results of the first pan European study on the status of distribution of e-comics in Europe. EUDICOM consortium partners are: Izneo (Fr), Italian Association of Book publishers (IT), Spanish Association of Book Publishers (SP), Polish Association of Comics (PL) and Federation of European Publishers (BE)

The Embassy of Canada in France, in partnership with Québec BD and the Association nationale des éditeurs de livres - Québec Edition, will offer exclusive content and welcome a delegation of about twenty publishers from both French- and English-speaking Canada.

KEY FIGURES:
As the world’s third-largest comics market, France holds a singular place on the international 9th Art scene. It was one of the first to import foreign comics and export its own. With 3,623 titles sold to foreign publishers in 2019, the comics sector represents 26,8% of total sales in France, making it the second most translated editorial category abroad*.
Conversely, 2,668 of the comic books published in France in 2019, or more than 20% of the overall production, were foreign works. The majority of them were translated from Japanese and English**.
While foreign rights sales have contributed to blurring the medium’s territorial and cultural borders, audiovisual rights sales have built bridges between the various media channels. Some fifty film adaptations were made from French comics between 2016 and 2019***, and many others are currently in development.
Such a rich and diversified editorial offer means that more and more French people take to reading comics. 7.9 million people buy comics in France, around 14% of the population****
The French love their comics. In 2019, Angoulême became part of UNESCO Creative Cities Network in the field of literature. At the same time, it has confirmed its status as the world Comics Capital. An international symbol that consecrates more than forty years of comics dedication from the municipality, the FIBD, and more generally from France.