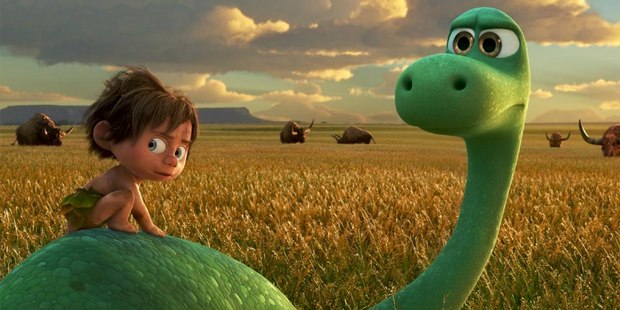 In mid-October a 26-year veteran animator made the rounds of NYC animation schools on behalf of Disney/Pixar’s upcoming Thanksgiving release The Good Dinosaur.

If people still put travel stickers on their steamer trunks (if people still had steamer trunks) Kevin O’Hara’s would sport ones from Don Bluth’s studio, Amblin Animation and a decade’s worth from DreamWorks before arriving at Pixar in time to work on Ratatouille. And none of it would’ve happened if he hadn’t seen The Jungle Book when he was seven years old.

“It changed my life -- I wanted to draw just like that,” Kevin tells me after a lively session with Greenwich Village animation students. “The animators kept it loose, you could almost see the sketches moving around. As a kid I was all caught up in that, that’s how I wanted to draw.

“My dad bought home a Disney Jungle Book coloring book, but the drawings didn’t have any life to them. I was pissed off: ‘Dad, this is not Jungle Book.’

“‘It says Jungle Book and it has Shere Khan right here.’

“‘That’s not Shere Khan.’ He didn’t know but I could tell it wasn’t a Milt Kahl Shere Khan.” (Kahl, one of Disney’s legendary “Nine Old Men” animated Khan, not mention Mowgli, Baloo and even the Beatlesque vultures.) Kevin also counts among his influences a quite different artist: Mad magazine’s preeminent caricaturist, Mort Drucker. “I learned to draw by tracing Mort because he had so much life in all his drawings. I got to meet him years ago -- and he was excited to meet an animator. It was very, very cool.”

Kevin briefly considered joining the Marine Corps after graduating high school until he heard a recruiter from a different organization: the Joe Kubert School of Cartoon and Graphic Art. “I wasn’t sure you could make a living as a cartoonist, but you could always quit art school -- you couldn’t quit the Marine Corps.”

Kevin made the transition from hand-drawn to computer during his DreamWorks stint, skills he took with him to Pixar. After animating Up’s Dug, Merida’s horse Angus and the ursine villain of Brave, his ability to break down horse gaits helped him develop a reputation as the go-to guy for four legged characters. He put those skills to work adapting an equine gallop to The Good Dinosaur’s two-legged T-rex cowboys. (Sam Elliott, as the lead T-rex “Butch” has never been more appropriately voice cast.) It’s a valuable talent when the star of Pixar’s latest film is a quadruped reptile.

“[Quadrupeds] are one of the most difficult animals to animate because there are a lot of moving parts,” he explains. While it’s standard practice for animation studios to provide real animals for their artists to study, the absence of actual dinosaurs in the 21st century forced Pixar to substitute an elephant for those extinct beasts. After capturing picturesque views of the pachyderm’s front, side and rear in motion Kevin was able to break down its gait into synchronized head, chest and hip movements. The Good Dinosaur is a “boy and his dog” story -- except the “boy” is a young Apatosaurus named Arlo and his “dog” is Spot, a six or seven year old “caveboy.” Spot spends a good part of the movie riding on Arlo’s back; in one of the clips Kevin screened Spot slides down Arlo’s curved tail and onto the ground -- a tiny moment, but one I suspect every kid watching the film would love to emulate.

Kevin described what it’s like to be a Pixar animator: “We work in low resolution at a pretty fast pace, just framing back and forth. Our character rig doesn’t have too much detail on top. It’s our job to make sure we have full performance, full expression, full locomotion in there. When it gets to those next departments like full simulation, that’s all going to go off the map of any movement we put on it that’ll enhance the skin movement and help that size.

“After working on the same scene for a month, it can look and feel repetitive. Then it comes back a month later with lighting and textures added. It’s always neat for us to see this full sim on top of our work: the effects, the mist, the lighting and the textures. It’s a whole new scene, it’s exciting for us.

“That’s what’s cool at Pixar too, all the departments will collaborate; you get to meet people who are doing something different and you’re always learning from it.” I ask Kevin my first standard question for animators who’ve moved from hand drawn to CGI. “I always compare hand-drawn animation to someone’s handwriting; the line you put on paper is a reflection of your personality. It interests me that it follows into CGI as well, which I’ve always thought of as basically pushing sliders around to manipulate a rig, or is that too simplified?”

“Maybe a little simple,” Kevin responds. “It is funny though, when you said ‘handwriting.’ As a hand-drawn animator sometimes you see a scene your friend did, and you see your friend in that scene. It could be a bear or something, but ‘hey, that looks just like,’ you know.

“In the computer we still have the same thing. One time we were in dailies and an animator showed his scene. Pete Sohn [The Good Dinosaur’s director] said ‘that looks just like Travis [Hathaway, another Pixar artist].’ It was Arlo’s face, but it looked like Travis. Not just the pose -- there was kind of the essence of Travis in the movement.

“There was another animator who did a cool scene of Spot we all responded to. It was a very subtle expression, something that he saw in his son. He was able to capture that and convey it through the computer. We saw that on the screen and it was pretty powerful.” Being able to turn yourself (or your son) into a bear or a dinosaur is as good a reason to become an animator as any…I follow up with my second standard question: “Do you miss hand-drawn animation, do you wish you were still working in it?”

“I’m passionate about it,” Kevin answers. “I love the drawing, but I do love…there are challenges to the computer also, but the ease of making changes more than makes up for it. A lot of time in hand-drawn you animate a scene, but when you look at it you think a three-quarter view might work better, and then you have to redraw everything,” a problem easily resolved in CGI when all that’s involved is repositioning the virtual ‘camera.’

“What’s nice about Presto [Pixar’s proprietary software] it has a draw tool built in for us. We have a bunch of hand drawn animators that have converted to the computer. We’ll be in dailies and the first version will be an animated pencil test we can show the director. It helps us work quickly. We’re open for notes and we can get back to our desk with a great blueprint of what we’re going to be animating online.”

I ask if the pencil test is used for more than a visual reference in designing a character’s rigging. “It can be. When we’re doing animation it’s almost like moving thumbnails. It does help when we’re working with the team rigging the characters for us. If we’re doing a locomotion test of Arlo we want to see how the legs are actually holding up when he’s walking. If there’s a question we have we can animate draw-overs so the rigger can see the behavior we need from the knee or something when we’re working, so it’s pretty cool to be able to use it for a lot of other things.”

It’s time for my last question to Kevin: “Do you want to direct someday or leave that to other people and just enjoy what you’re doing at this point?”

“It’s pretty intimidating to think about directing. What I love about the directors I’ve been able to work with is they’re very inspiring people. They’re always asking animators to bring something personal to the film. Pete really leaned on us, ‘bring me something that I haven’t seen in the boards,’ or ‘do what you guys do.’ And you can’t help but run with that.”