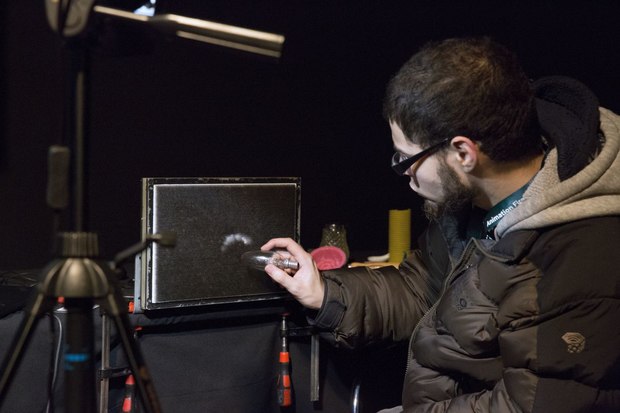 When I first heard of FIAF (fi : af) I thought it was that scandal-ridden organization in charge of soccer’s World Cup. That was FIFA of course, my mistake.

The weekend’s star attraction and guest of honor was Michel Ocelot, on hand to celebrate the 20th anniversary of his landmark animated feature, Kirikou and the Sorceress. “I wasn’t always ready for success,” Ocelot reflected. “I didn’t expect to touch so many people inside.”

It was a pleasure to watch Ocelot’s masterpiece again, with its rich palette and a narrative that felt true to its folktale roots rather than Hollywood-ized for popular consumption. An American animation studio would never allow repetitive dialog into their feature, but poetic rhythm is part of the oral storytelling tradition: every time Kirikou asks what happened to a different relative his mother responds, “and she ate them up.” Over and over Kirikou keeps asking, “Why is she [the sorceress] evil?” Even though she seems at first to be a stock villain because she talks with a villain’s sneering contempt, Kirikou’s grandfather explains, “Because she’s in pain.” Sympathy or understanding of what drives an adversary is extremely rare in American animated features.

Ocelot screened his earlier films and discussed his career with independent New York animator Candy Kugel. Les Trois Inventeurs was a particularly…inventive work, with its cut-out paper protagonists and doily-based design, while his version of the frog prince and his “magic” kisses was far weirder than anything Disney or even Jay Ward could come up with.

Ocelot spoke of his childhood years in Guinea West Africa where he was the only white child in school: “When I was small, I was black - I thought ‘normal’ was dark skin.” As for the unself-conscious nudity throughout Kirikou, “In Africa, nothing is hidden, nothing is dirty.” When you’re an internationally celebrated animator with a slew of honors to your name (among everything else Ocelot is a chevalier of the French Légion d’honneur) you can say things like “I never make films for children - I don’t create for a ‘target audience.’ I have to be fascinated by what I’m doing.” Le Clitoris anthropomorphized that tiny but powerful bit of female anatomy into “Clito,” a friendly two-legged figure, and name-checked its number one enemy, Sigmund Freud. Vibrato depicted a woman trying to create a lover for herself, finally settling on a table full of rich desserts she proceeded to ravish with messy results. Personally, my favorite was La joie de vivre, a 1934 clean-lined black and white effort. The sensual, poetic (but not sexual) flight of fancy featured two women gamboling through lush forests and industrial backgrounds, eventually joined by a handsome bicycle-riding young man. At film’s end the trio takes to the sky on his bicycle, ET-style.

After Michel Ocelot, Animation First’s most awesome guest…was the pinscreen. For those unfamiliar with the device, the pinscreen was invented in the 1930s by Alexandre Alexeïeff and his wife Claire Parker in their Paris Studio, where they made a handful of films with their unique invention.

Alexeïeff’s grandson, filmmaker Alexandre Rockwell, was on hand to talk about his grandfather’s creation. According to Rockwell, Ax’s inspiration came from…his whiskers, and the pattern of shadows they cast across his cheek just prior to shaving. The result: a densely-packed horizontal matrix of 240,000 black pins inside an equal number of white tubes held in a vertical frame open on both its front and back sides. (A larger version of the device consists of a million pin and tubes.) The white tubes are pushed inward from the front side, the black pins pushed outward from the device’s back. The pins and tubes are adjusted in tiny increments to create the frame by frame animation, a process requiring almost super-human focus and patience.  “You need to have long arms and be ambidextrous” in order to manipulate both sides of the pinscreen, says the National Film Board of Canada’s Michèle Lemieux, one of its most adept animators. “You can’t be dyslexic.”

An assortment of odd-shaped tools -- even household gimcracks or textured lightbulbs --manipulate the pins creating a huge variety of textures. Some tools can be even be adjusted and locked to create a specific pattern or object and used like a rubber stamp on the pinscreen to replicate that image multiple times or have it travel across the screen. “Some [of the tools] look very, very, very strange,” says Jean-Baptiste Garnero of France’s CNC (“centre national du cinéma et l’image animée”); “like inquisition tools.” The length to which the tubes and pins extrude allows for a huge range in tonal values and textures - which are brought to life by an angled light source casting the pins’ shadows on the white background; the images photographed by the camera facing the pinscreen are literally composed of shadow, not substance.

The pinscreen’s history, the story of its creators and how close it came to being an art form and technology forever lost would (and deserves to) fill a book or a detailed Netflix documentary. (After its creators’ deaths, only four people were left who knew how to use it.) The NFB and CNC are cooperatively training a new generation of animators to master the pinscreen.

According to Lemieux, an almost mystical union develops between the pinscreen and the animator. “It’s the perfect instrument for the subconscious, a reflection of the universe. I started dreaming immediately...the pinscreen decides what it’s going to do. You can’t work from a storyboard, you have to invent on the spot.”

An attendee at the event suggested a pinscreen backed up by modern digital technology could track and retain the information of the pins’ positions at every frame photographed, enabling the animator to back and correct a “mistake” earlier in the process; did that sound like an appealing possibility?

“No - then the game would be boring for me.”

‘My Dad the Bounty Hunter’: Representation Beneath the Skin
The Massive Creative Fellowship Behind ‘The Lord of the Rings: The Rings of Power’
‘The Dragon Prince’ Director Villads Spangsberg Talks Toonlines and Tough Challenges
Laurence Fishburne and Steve Loter Talk ‘Marvel’s Moon Girl and Devil Dinosaur’
Taking an Old-School VFX Approach in ‘All Quiet on the Western Front’
‘Natural Habitat Shorts’: Like ‘Ranger Rick,’ But for Adults
Framestore Sets Sail on ‘1899’ with New Virtual Production Tools
VFX is the ‘Thing’ for Tom Turnbull on Tim Burton’s ‘Wednesday’
END_OF_DOCUMENT_TOKEN_TO_BE_REPLACED