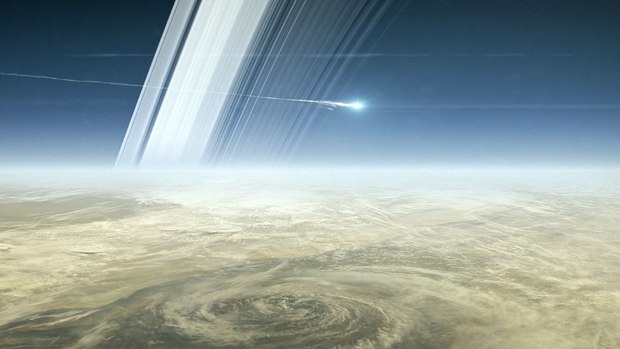 Erik Wernquist: “The film is meant as an inspirational and informative piece about what happens in the last months of the mission and as a celebration of all that this historic spacecraft has achieved.

“It has been an unprecedented honor for me to do this film. Being a passionate enthusiast of planetary science, Cassini is the one mission – more than any other – to define my interest in the field, as I’ve had the pleasure to follow its success, from start to end, for a major part of my adult life.

"Cassini (launched in 1997) has been in orbit around Saturn since 2004 exploring the giant planet, its spectacular system of rings and moons. In 2017,  after bringing home remarkably successful scientific achievements, discoveries and a treasury of gorgeous photos – the spacecraft is running out of fuel to maneuver.

"In order to protect the moons Enceladus and Titan, and their potentially life-bearing sub surface oceans, from possible contamination in the unlikely event of a future collision, it has been decided to take Cassini permanently out of service.

"Even up until the very end, Cassini will bring home data, as it tastes the atmosphere of Saturn, just minutes before burning up and becoming part of the planet itself.

“Thank you Cassini, and farewell. The solar system will feel empty without you.”

Read more from Stash at www.stashmedia.tv

‘Baymax!’ Provides an Rx for Humor and Compassion
How Digital Domain Brought Photoreal Characters to Life in ‘The Quarry’
SCAD GamingFest: Building Shared Story Experiences with Diverse Character Design
Mission Critical: ‘Lightyear’s Journey to Infinity and Beyond
Putting the Fun in Dysfunction: The Non-Humanistic Therapy of ‘HouseBroken’
‘The Freak Brothers’: This is Your Humor on Drugs
The Heroic Logistics of ‘Superman & Lois’ VFX
END_OF_DOCUMENT_TOKEN_TO_BE_REPLACED