MY CHRISTMAS WISH LIST – TWO BOOKS ON ANIMATION THAT I RECOMMEND 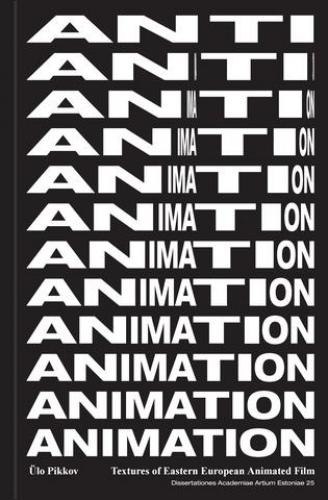 Anyone who has read Estonian animator and author Ulo Pikkov’s 2010 book Animasophy: Theoretical Writings on the Animated Film knows that he is a very knowledgeable, readable writer.  His latest book Anti-Animation: Textures of Eastern European Animated Film is equally readable.  The first half of the book is devoted to the core elements and characteristic features of Eastern European animation between the end of World War ll and the fall of the Berlin Wall in 1989.

Ulo explains the title as referring to “. . . all of the animated films produced under the conditions of a totalitarian regime that, contrary to those made in the “free world”, were shaped by the socialist command economy and political censorship.  One could say that anti-animations were made despite all of the rules of logic”.

Beginning with Eastern European surrealist animation and Jan Svankmajer, Ulo goes on to examine the relationship between animated films and caricatures in the Soviet Block where films were strictly censored.  Many prominent animators were also active caricature artists and used both mediums to get coded messages past the censors.

The book is Ulo’s Doctoral Thesis at the Estonian Academy of Arts and as such, the second half of the book is devoted to a detailed analysis of the making of Ulo’s 2011 film Body Memory.  This section opens with a link to Body Memory so the reader can watch the film.  Next, we are taken through the research phase, preliminary sketches, and technical execution of the film.  Next we are given a shot by shot breakdown of the film and finally, 16 pages are devoted to the shooting storyboard of Body Memory.  The bibliography for each segment is very thorough and concise.

Whether you are an animator who would like to delve into the mind of another animator to see how he approaches his craft, a historian interested in Soviet animation, or an animation aficionado ANTI-ANIMATION: Textures of Eastern European Film will be a worthwhile addition to your library.

You can order it at: https://www.kriso.ee/cgi-bin/shop/searchbooks.html?author=%DClo+Pikkov&database=estonian2 and the price is €14.50

Eliane Gordeeff is a Brazilian animator, animation researcher, and professor living in Lisbon, Portugal.  In 2011 she completed her Master's Degree at the Federal University of Rio de Janeiro.  Her thesis served as the basis for AESTHETIC INTERFERENCES – The Stop Motion Technique in Animation Narrative.

Eliane set out to analyze how the impact of the animated image is processed, in terms of the artistic/emotional empathy of the viewer.  The book also analyzes how the physical representatives and/or symbolic use of materials affect reactions to a stop-motion film.

The book does not directly deal with historical or technical issues but of course, when discussing stop-motion films as creative, expressive art you cannot ignore masterpieces from the past.   The first part of the book is devoted to a brief overview of the development of stop-motion animation. This is followed by chapters on the aesthetic and narrative aspects of stop-motion versus live action cinema.  Of particular interest is the in-depth discussion of five films that the author has selected because she feels that “these shorts stand out for their beauty, technical quality, and for the message they convey”.  The five films are:  Neighbors, Norman McLaren (1952; De Janela Pro Cinema/Cinema From A Window, Quia Rodrigues (1999); The Old Man and the Sea, Alexander Petrov (1999), Adagio, Garri Bardin (2000) and Aria, Piotr Sapegin (2001)

Even though the book is based on academic research, the text has been revised so that it is extremely easy for the layman to read and comprehend.  AESTHETIC INTERFERENCES – The Stop Motion Technique in Animation Narrative gave me much food for thought.  I highly recommend the book to anyone working in the field of animation or who is interested in learning more about the art form.

You can order Eliane's book at: a.interferences@gmail.com  or at https://m.facebook.com/aestheticinterferences and the price is €25 plus postage.