MUSIC IN THE AIR AT THE FESTIVAL INTERNATIONAL DU FILM D’AUBAGNE OF MUSIC AND FILM: 20 – 25 March 2017 in Aubagne, France

For six days live action film and animation directors and their composers took center stage at the International Festival of Music and Cinema in Aubagne, France.  The aim of the festival is to bring together young artists with professional film makers and composers.  With more than 140 composers at the festival along with other people involved in all branches of the film and animation industry, networking was a high priority. 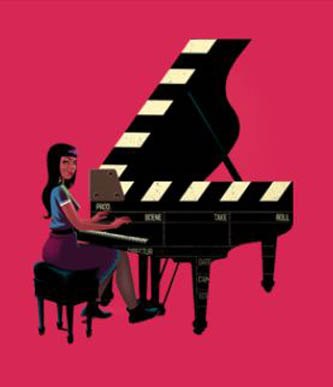 For six days live action film and animation directors and their composers took center stage at the International Festival of Music and Cinema in Aubagne, France.  The aim of the festival is to bring together young artists with professional film makers and composers.  With more than 140 composers at the festival along with other people involved in all branches of the film and animation industry, networking was a high priority. Nik and I were invited to attend because Taboek a short 3” animated film that Nik composed the music for was selected for the short film competition.  Unfortunately the film’s director Dario Van Vree from Amsterdam was not able to attend because he was busy working on a new project.  Taboek is about a saucy young lady who is browsing in a bookstore.  She is drawn to a volume about kinky bondage despite the disapproving glares from other customers.  Does she let her embarrassment keep her from buying the book or does she follow her bliss?  The answer is the climax of the film.

Finnish animator Heta Jaalinoja’s 3 minute graduation film Penelope used pencil lines, colors, and textures to take the viewer into Penelope’s world as she wakes up to the insistent ringing of her door bell.  She races to get dressed and tidy up her house before her caller leaves.  The film brought a smile of recognition to my face as  it brought back memories of my own mad dashes to get myself presentable for an unexpected caller. Jan Saska’s debut animation Happy End is a black comedy about death with a happy ending.  The 5’40” black and white work sets up an unlikely chain of encounters between hunters, a tractor driver, a disco dancer, and a corpse, with all events running backwards in time.  Starting with the payoff gag and then working backwards is difficult but Saska manages to pull it off with vivid comic characters and a lot of slapstick.

The bar for quality film and music was set high by the opening night live action feature film Captain Fantastic. The film, directed by Matt Ross with music composed by Alex Somers, stars Viggo Mortensen as the father of 6 young children living an isolated life in the forest of the Pacific Northwest.  He has dedicated his life to transforming his four daughters and two sons into extraordinary young people both physically and mentally.  When tragedy strikes the family they are forced to leave their “paradise” and begin a journey into the outside world that challenges the father’s idea of what it means to be a parent.  The story is enthralling and the beautiful cinematography is perfectly set off by the musical score. There were several delightful live action surprises at the festival for me.  Eduardo Sosa Soria’s After the Ashes about a chance encounter between a cancer patient and the husband of her roommate in the cancer hospital left a strong impression on me.  After the wife dies, the surviving cancer patient and the widower begin an affair.  The film is more than a story about an affair.  The film portrays with great sensitivity the deep needs and wounds that cancer leaves behind for both the cancer survivor and the partner of the dead patient. Irish filmmaker Audrey O’Riley’s Wait is at first glance a simple story of a father and his grown son who had lost touch with each other.  They find each other again, if only temporarily, over shared memories when a rare visit home by his grown son coincides with an important pigeon race.  As the father anxiously awaits the return home of his prize pigeon, the long forgotten hours that the father and son had spent together with their birds is remembered and renews their bond. Even if you don’t know anything about pigeon racing it doesn’t matter, it’s enough to realize that in some parts of the world it is still an important sport, and you will enjoy the mood set by two very accomplished actors.  It is a universal story that could be set anywhere between two people who once shared a common bond that has been broken.

This year the special guest of the festival was British composer Rachel Portman.  She is the first female composer to win an Academy Award, which she received for her score of Emma.  She also received an Emmy for Bessie and 2 Academy Award nominations for Chocolat and The Cider House Rules.  In the main festival screening room Portman spoke to a packed audience about her career as a composer before introducing a screening of Chocolat.  She also visited the Conservatoire d’Aubgane where she gave a talk to the music students.

The 3 ½ hour late night screening was billed as A Committed Night.  The selected films were all made to advocate an idea, make a political statement, or promote a point of view.  The stories ranged from Small Change by Greek film maker Nicos Panayotopoulos, which tells the plight of a wheel chair bound man who attempts to beg for money in the streets of Athens to my personal favorite film, Unripe Cherries.  Macedonian director Nebojsha Jovanovik told a gripping story of a group of people from different religious and ethnic communities who are traveling together in a train compartment in Macedonia in 2001 while the countryside faces a civil war.  The tension on screen was so acute that it transferred to the audience as we waited to see what would be the final outcome when a young Albanian whose brother was killed in the war enters the compartment.

Screenings of short animations for school groups from 6 to 11 years old were held on three mornings.  One program was made up of 6 episodes of the delightful Slovakian series Mimi and Lisa created by Katarina Kerekesova.  Mimi is blind and shy.  She perceives the world differently from most people thanks to her other highly developed senses.  Her friend Lisa, who lives next door, is always ready for an adventure.  Together the girls discover the universe of their neighborhood where the smallest object can become a fantastic adventure with imagination as their only boundary.  There were also 3 screenings of the wonderful My Life as a Courgette.  Two morning screenings were for school groups with an afternoon screening for the public.

One of the primary aims of the festival is to promote meetings between young directors and composers.  There were many special events specifically designed for networking.  Board members of the International Masters in Composition for Screen (InMICS) gave a presentation about their program.  The InMICS aims to develop a joint Masters Degree program in music composition for audio visual media.  It is funded with support from the Erasmus + program of the European Union.  The partnership brings together 4 higher education institutions known for their expertise in music composition for audio visual media with 4 specialized professional partners in the film industry that show a great interest in the creation of music.  The founding partners are CNSMD de Lyon, KASK and Conservatorium/School of Arts Gent, Film Fest Gent, Permissian Inc. Montreal, FondazioneCinteca di Bologna, Faculte de Musique Universite de Montreal, and the Festival International du Film d’Aubagne.

One evening there was a screening and discussion session dedicated to film music with 8 composers and 4 directors presenting their collaborations that had been created under the InMICS program.  Young composers who are interested in the program can get additional information and an application form at:   www.inmics.org The festival promotes a program that gives directors looking for a composer the opportunity to meet with composers who have specifically prepared musical presentations for the directors.  If the director opts to work with one of the composers the festival contributes funds toward the film’s production. Each evening there were concerts with either live bands or DJ’s.  One night Nik played with the La La Band.  The group made up of musicians, composers, actors, directors, and festival guests performed a rehearsed evening of film songs that got the audience up out of their seats and onto the dance floor. Each morning breakfast was served to all of the guests at the festival center.  This was followed by a question and answer session with directors and composers.  Unlike most Q and A sessions where filmmakers are interviewed one at a time, moderator Vicky Moreau from Montreal, Canada would pose a question such as “Is there a difference in composing for animation and live action films?”  Vicky then opened the floor for discussion by the entire group which led to interesting discussions about how different composers worked.  When someone discussed their film a short clip of it was put up on the screen which made it very easy to recall which film they were talking about.  I enjoyed this form of directors chat because it created dialogues and discussions about processes rather than just giving everyone a few minutes to talk about their film. Following the Saturday night awards ceremony the 9 students who participated in the Master Class of Musical Composition for Film under the direction of noted composer Jerome Lemonnier preformed a concert to films.  The group who worked from 15 to 25 March rewrote scores to 5 short films and animations such as Georges Melies’ 1902 A Trip to the Moon.  A closing night party was held at the festival headquarters.  There was delicious food and music performed by the French duo The Penelopes. Nik and I are indebted to Samya Papasoff, Head of Production, who arranged for our visit to the festival and did everything possible to make our visit a wonderful experience.  Festival Interne Genevieve Venne from Montreal, Canada was always on hand to answer questions and help us in numerous ways. We owe a big thank you to the festival for inviting us.  There was so much to see and do at the festival that it was impossible to be everywhere at once.  If you have the opportunity to attend   the Festival International Du Film D’Aubagne, I urge you to go.  The town in the South of France is charming and you will see many excellent films.  You can read more about the festival at:  www.aubagne-filmfest2017.com

Prize for the young German cinematorgraphy and 800 Euros given by the Goethe Institute:

Prize for the Best Engaged Night of Short Animation Film:

Prize From the Cultural Delegates of Aubagne:

Unpacking ‘The Croods: A New Age’ Character Animation
How Deep Sky Created The Smashing Pumpkins’ ‘In Ashes’ Music Video Series
Designing the Illusory: Souls, Counselors, and The Great Before of ‘Soul’
Chicken Bone FX Makes All the Right Moves in ‘The Queen’s Gambit’
Cinzia Angelini's 'Mila' Gives an Animated Voice to Children of War
Eep, Grug, and Gran Are Back in DreamWorks Animation’s ‘The Croods: A New Age’
A Couple Faces the Pain of Unspoken Grief in ‘If Anything Happens I Love You’
Chiodo Bros’ ‘Alien Xmas’ Joins the Pantheon of Stop-Motion Holiday Classics
END_OF_DOCUMENT_TOKEN_TO_BE_REPLACED